It’s my contention that this board has a heavy bias. 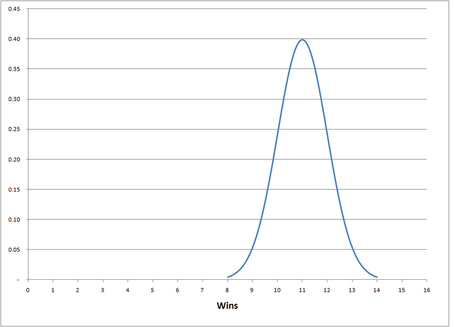 The most pessimistic predictions I see here are 8-8.

This is the NFL where Super Bowl teams regularly miss the playoffs the next year.

Quick digression. There’s a method for overcoming biases. The method: instead of focusing on the specifics of a particular team focus on the general results for teams chosen to be similar.

To summarize, new research on decision making indicates that poor decisions often result from focusing on the ‘inside view’. The ‘inside view’ being the view formed by focusing on information that is close at hand and unique or specific to the user. For example, people are poor at projecting how long it will take them to complete a project (they underestimate) even though they have the most information. However, the research has found that decision making can be improved by focusing on the ‘outside view’, the i.e. the general result for a reference class. For example, people are much better at predicting how long it will take someone else to finish their projects.

In this case the ‘inside view’ is our specific knowledge about the Cowboys. We know the players, the coaches, etc, etc. And from that we reason things like: Romo is going to be healthy this season therefore the Cowboys will be better. The ‘outside view’ would be to take a reference class (e.g. 6-10 NFL teams) and see how they did the following season.

What does the ‘outside view’ tell us about the general results for 6-10 teams and how the Cowboys are likely to do? Let’s look at a reference class made up of teams that went 7-9, 6-10, and 5-11 and see how they did the following year. 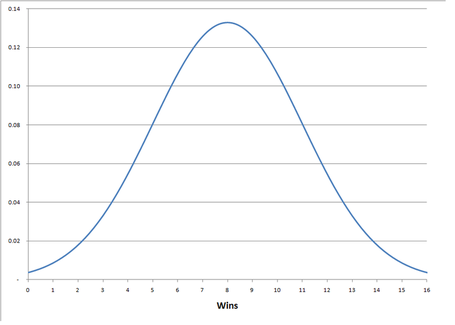 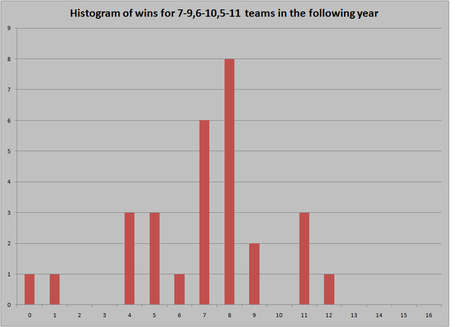 I’ve been concerned about the Dallas pass defense for two years. In fact my first BTB post was after the Vikings playoff loss and my concern about the pass D. Defensive pass efficiency has been declining since 2008. The table below summarizes the stat I look at: Pass YPA adjusted for sacks

Now I know that defensive pass efficiency is inconsistent (likely because efficiency statistics are sensitive to big plays which tend to have a large element of unpredictability). I also know that the more unpredictable a statistic is the stronger the tendency to mean reversion (there’s little mean reversion in chess because it’s mostly skill … lots of mean reversion in coin flipping because it’s all luck). So I don’t want to read too much into Dallas being 28th in adjusted pass YPA. I expect there’s going to be mean reversion and the Dallas pass D is going to be better this year. One year a team is #3, the next year #10, the next year #28. When a statistic bounces around like that the right conclusion is that we can’t use it to predict where it’s going next.

And we don’t have to look at stats in a vacuum. We can use all the information at hand. And when we try to project how the Dallas D might play there’s one very real reason why we might expect the D to get worse: age. The defense basically kept their personnel the same and at least four key players, Ware, Newman, Ratliff, and James are a year farther from their prime than they were last year. When I put that together with the decline in 2009 and the collapse in 2010 it’s not crazy to say the D could be worse. I wouldn’t say that’s likely but if I was handicapping it? I might say 1 in 5.

Here’s the link for the NFL’s single season sack leaders. I encourage everyone to poke around and look at when the great pass rushers peaked. .

I could be wrong. I wasn’t scientific about this but when I looked through the single season leaders it seemed like the following was a pretty typical pattern

Gastineu, LT, Derrick Thomas, Tim Harris, Dexter Manley, Pat Swilling, Joey Porter, Simeon Rice all fit that profile (note that for the most part these are the speed guys).

Now it’s not a hard and fast rule. Reggie White, Chris Doleman, Bruce Smith, Michael Strahan all were effective past 33 (although I’d note all those players were pure DL, none were OLB types).