Tracking Seventh Round Gem Bill Nagy; How He Earned Another Start At LG

Share All sharing options for: Tracking Seventh Round Gem Bill Nagy; How He Earned Another Start At LG

Sorry for the delay folks, but better late than never! Cowboys seventh round pick Bill Nagy has become the talk of the Cowboys offensive line makeover in the last week or so. This past Sunday, Nagy faced a stiff test in San Diego's defensive line rotation. His performance here (as well as against Denver which was tracked in this post) has earned him a start in this Saturday's game against the Vikings, in the regular season dress rehearsal. The stars will not be playing in the preseason finale, so this is the final look we'll have of Nagy integrated with the #1's. Unless, of course, he earns the start full time.

Chargers NT Antonio Garay graded out as the best 3-4 NT in football in 2010 according to Pro Football Focus despite playing in less than 50% of his team's defensive snaps. 3-4 Defensive End Luis Castillo's reputation might be ahead of his production, but he is an experienced veteran. First round pick Corey Liguet seems to be a stud in the making, and the Charger backups are no slouches. Suffice to say, this matchup is an ideal test case to see where Nagy stands at this time in preparation for regular playing time in the regular season.

In the three 'starters' series Nagy was in the game for, he stayed at left guard. As has been pointed out, the Cowboys have kept their blocking schemes pretty vanilla through the first two games; either to hide their strengths or to dumb down the assignments for the inexperienced. He didn't have any 'wow' moments like Tyron Smith did, but that doesn't mean his contributions are less noteworthy. Nagy only pulled once in the three series, so I'll be looking for how many times and how well Nagy pulls in Saturday night's dress rehearsal. I'm sure JG would love to be two-handed with these sorts of plays come the regular season. Nagy's performance wasn't as impressive as Tyron Smith's over the same amount of snaps, but the plays where I did have him graded on the negative side, never resulted in a loss of yardage or a turnover. Nagy's best performance was in a crunch-time play. Down 10-0, 3rd and goal and he gave his strongest effort. I like that kind of fight.

It's funny to reread Nagy's NFLDraftScout.com profile after reviewing the tape, as it describes what I saw, almost to a tee.

Positives: Hard-working, team player with the typical Wisconsin toughness. Possesses initial burst off the snap and the foot quickness to pull and trap effectively. Reaches the second level quickly, gives good effort to reach linebackers on run plays. Uses quickness and correct angles to wall off defenders to open holes inside. Fair anchor in pass protection, uses footwork, agility and technique to mirror.

Negatives: Played right guard, may be a center only for many teams because of his lack of bulk. Rarely a regular starter, mostly filled in due to injuries. Does not hit second-level targets consistently, dives at their feet instead of taking them on. Positional zone blocker, lacks great strength so stronger defenders can shed on the move. Lowers his head while engaged, veteran defensive lineman will know how to get under his pads and take him into the backfield.

Here's the play by play.

1st and 10 from their own 17 - Playing left guard, the Cowboys open up in a Jumbo right package. Run right for 7, Smith lets the blitzing inside LB run right past him. The blitz was well timed, but Smith's reaction time was lacking. LG Nagy is pulling on the play and gets over in time to prevent a huge loss with a one arm pancake. It appears Nagy was to seal the edge and would've sprung Felix at least to the safety level if he didn't have to cover.  Major Positive.

2nd and 4 - Pass play 2 WR, 2 RB, TE. Nagy and Gurode double team NT Garay, however Gurode doesn't punch him, more so just taps him twice quickly then peels right to help Kosier and Smith with their one on one blocks. Garay overpowers Nagy and pushes him back in the pocket, forcing Romo to step up. Garay then slams Romo (Brady or Manning would have drawn the flag) as he gets away an incomplete dump off pass. The main fault here is Gurode, but Nagy could not handle the strength of Garay. Negative

3rd and 4 - 3 wide 1 TE 1 RB, Shotgun. The Chargers counter with 8 in the box, rushing 6. Pass play, Nagy has one-on-one against backup DE Vaughn Martin. Martin pushes Nagy back but Romo's depth and three step drop means he still has pocket room. Pass dropped by Bryant. Nagy kept his man from making the play, so that's a good thing. Slight positive.

1st and 10 from the 20 - 2 WR, 2 RB, 1 TE. Screen pass to SE Bryant. Nobody's over Nagy and he releases upfield, well ahead of Bryant. Ogletree whiffs on his block and that defender slows down Bryant's progress. Gain of 6. Push.

2nd and 4 - 2WR. 2RB, 1 TE. Run play. Nagy doubles down on the DE with Free, his punch sending the defender out the play, then comes back and engages the LB. Misdirection play, run starts left then comes back into open area cleared by Smith and Bennett. Gain of 7. Positive

1st and 10 from their 33 - Cowboys in Jumbo left, bringing Witten in motion then back to his original spot.  With a little help from Gurode initially handles Cam Thomas cleanly while FJ makes a block on a DE that buys Romo time for the completion to Witten. Positive.

2nd and 4 - Nagy one on one against fellow rookie but first rounder Corey Liguet. 5 step drop by Romo. Nagy punches CL and pushes him wide enough that Romo has a chance to get the ball out to Witten for the first down. Pass complete for 6. Positive.

1st and 10 from the 45 - No one lined up over top of Nagy. Screen left to Bryant. Nagy doesn't have any one to block, and slows down instead of charging at defender once Bryant was bottled up at the sideline. Slight negative.

2nd and 3 - Pass play, San Diego rushes 5, Nagy has no one to block. Play action right, Romo has a big pocket, gives a pump fake that fools no one and throws into coverage. Interception. Push.

1st and 10 from the 20 - Nagy against 2nd year man Cam Thomas. Thomas knocks Nagy on his butt, but the play call renders the beat, moot. Screen pass left to Ogletree. Gain of 14. Negative.

1st and 10 from the 34 - Jumbo left set. Run play to the left, Nagy meets Cam Thomas at the line and occupies him nicely before getting tossed aside. Felix makes the DB miss badly, and a piulling Kosier seals off the play, allowing FJ to get outside for 22 yards. Positive.

1st and 10 from SD 44 - Jumbo left again. This is the Ole' play where Felix makes an unblocked defender miss badly. Nagy again has one on one DT responsibility and pushes Thomas back on this play. Run goes to the right, but Nagy did his job. Positive.

1st and 10 - Balanced Jumbo set. Nagy one on one against DE Liguet. Handles him fairly well as FB run goes left for 3 yards. Positive.

2nd and 7 - 2 WR, 2 RB, TE. Pass play, Witten goes on a route. Nagy 1-on-1 with CL again. Liguet hits Nagy with a swim move and gets into pocket, leaving Nagy on the ground. Romo swing pass to Lonyae Miller to the right side for a first down. Slight negative.

1st and 10 from SD  21 - Jumbo right.  This is Nagy's first pull of the game.  He comes right, meeting a LB with FB Gronkowski, but they don't seal the edge.  It looks like Nagy might have turned upfield a little too early. Two outside defenders converge on the Felix carry for a 3 yard gain. Negative.

2nd and 7 - 2WR, 2RB, TE. Cowboys line slants down right, Nagy with no assignment leaks into the second level. He stutter steps before engaging the linebacker, but does seal a lane. Felix decides the right is too congested and cuts back left for a gain of four yards, inside Nagy. Positive.

3rd and 3 from the 14 - Cowboys roll out the 12 formation for the first time in the game, both TE's to Witten's side. Bennett goes in motion left to show a balanced look.  Nagy gets beat by another Liguet swim move, but quick pass to Bennett for the first down. Slight negative.

1st and goal from the 9 - Jumbo left.  Nagy blocks down on DT Thomas, Felix runs through Nagy's area for a gain of 3 before Bob Sanders makes the tackle. Positive.

3rd and goal. 3 wide, with Witten next to Smith before he goes out on route.  Nagy punches DE Martin. Stunned by Nagy's Pocket Hulk power, Martin is then run into by the OLB that Free was blocking. The two switch off, with Nagy stonewalling Larry English. Romo has an amazing six seconds to find Witten in the back of the endzone on the ‘thumbs up' play. Nagy fought this entire play. Touchdown. Major Positive. Let's go to the pics! 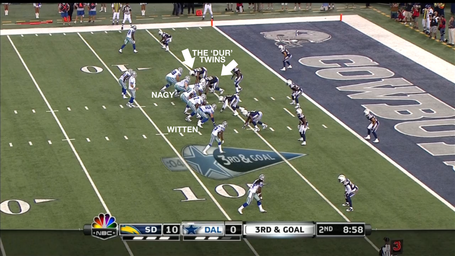 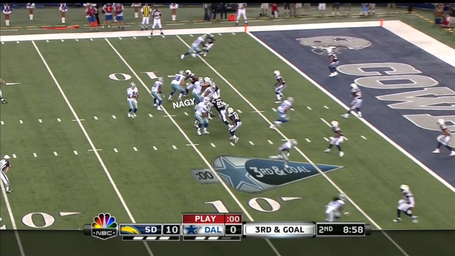 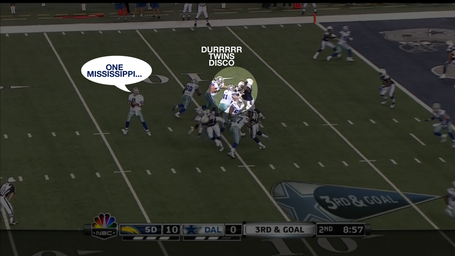 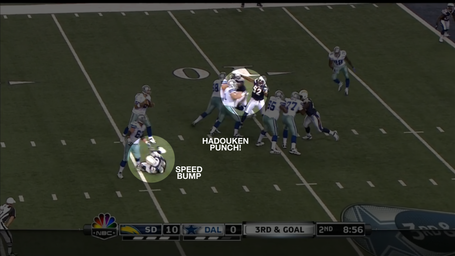 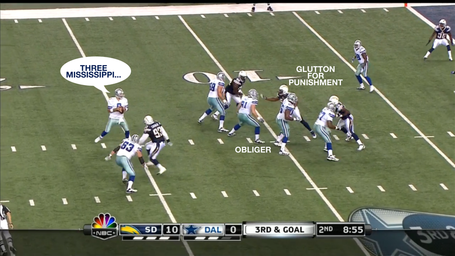 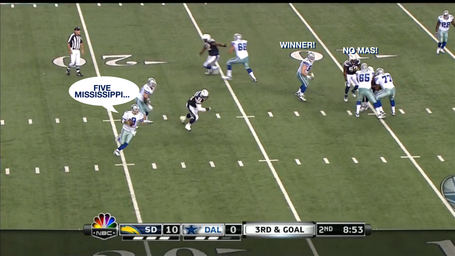 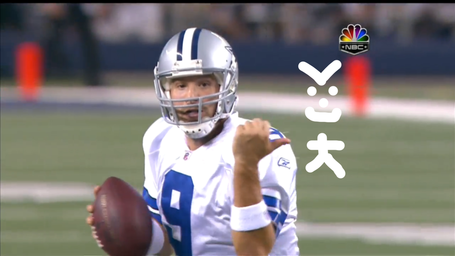 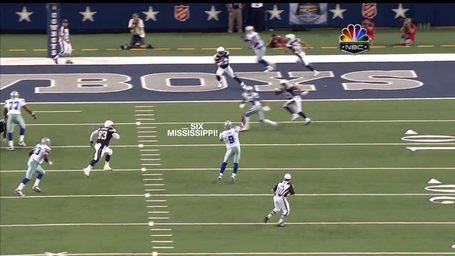 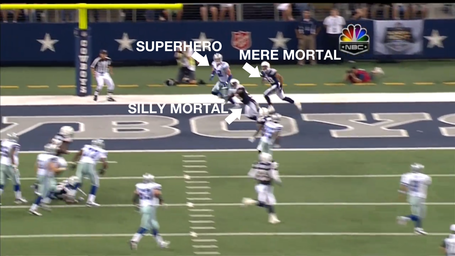 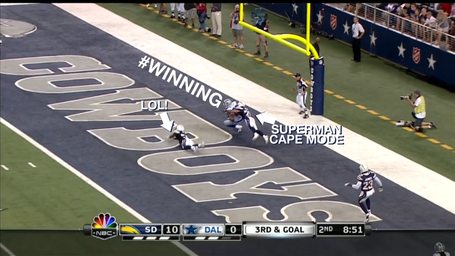