Share All sharing options for: Kegful of Insight: Cowboys23@Vikings17 - In a Game of Inches

Football fields and stats are measured in yards, but football is a game of inches. The Cowboys were victorious over the Vikings in the "dress rehearsal" preseason game last night though they lost many of the battles on the field. This is partly because they managed to claim many of those elusive inches to take the lead and hold onto it for most of the night.

But perhaps that is the best thing to take away from the game. As Coach Tony D'Amato (played by Al Pacino) said, winning the game of inches says a lot about your football team.

You find out life's this game of inches, so is football. Because in either game - life or football - the margin for error is so small. I mean, one half a step too late or too early and you don't quite make it. One half second too slow, too fast and you don't quite catch it. The inches we need are everywhere around us. They're in every break of the game, every minute, every second.

It was a strange game if not a solid victory. The Cowboys did not win in the most conventional of ways, but in all three phases of the game the Cowboys managed to avoid making big mistakes while fighting for the full 60 minutes to ensure a victory. And along the way, the team managed to earn every inch that was needed to win a close game many thought they should/would lose.

Let's take a closer look at some game changing moments.

It's tough to win a football game when you can't stop the run, yet the Cowboys managed to rally as a team to take the lead, win momentum and score points off special teams and defensive turnovers. It wasn't a pretty victory or an awe-inspiring performance by the defense, or even the offense, but the Cowboys overcame a big play from the Vikings opening drive, and then took the lead by returning a blocked field goal for a touchdown. From that point in the 2nd quarter (10-7) the Cowboys never relinquished the lead. Gerald Sensabaugh not only blocked the field goal, but he also picked off a deflected pass for an interception, and the defense compiled three sacks. Though the Vikings had over 400 yards of offense, they only got into the redzone once.

The offense was crisp, though the passing game and running game did not break any big plays. The Cowboys quarterbacks completed 21 of 30 attempts, and though with solid accuracy gained under 250 yards through the air. All the running backs had their moments and the team averaged 4.0 yards a carry, but the longest runs of the night were only 10 or 11 yards (albeit, one by each running back). The offense was solid, but not explosive.

In the Game of Inches, deep touchdown passes are king. This is where the majority of big plays for offenses are an inch's breadth away from success or failure. It is the reason the Cowboys found themselves trailing early in the game instead of having momentum swing from a big defensive play and turnover. 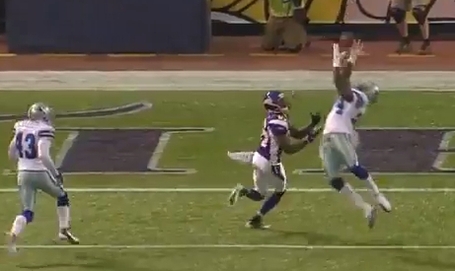 While Sensabaugh was beat in coverage, Abram Elam made a great play on the ball. Watching the replay, he seems to delay a split second as he tracks the ball and ends up underplaying the catch. His timing off by an inch, instead of an interception the result of the play is a 1st quarter touchdown and longest play of the game.

On the second drive for the Vikings, the Game of Inches was in overdrive. Donovan McNabb was fighting for inches often and sometimes his life. A big play to Percy Harvin (nicely designed by OC Bill Musgrave) had McNabb scrambling back and off his back foot barely getting the pass over the rush and hands of DeMarcus Ware. Later that drive, an "almost" sack fumble was instead a dozen yard gain in the passing game. Again Ware provided the pressure, nearly throwing the blocker into McNabb, and even after being held for a while, he nearly managed to chase McNabb down and force a sack-strip.

Even many of the successful runs for the Vikings were a matter of inches. On that same drive Adrian Peterson makes a subtle step in before bouncing a run out for a big gain. This great move fooled Spencer who had good position on the edge, but lost it when he thought Peterson was running up instead of out.

Later on that run, Orlando Scandrick also misses Peterson by inches, and the 1st down run ended up a gain of eight yards. The Cowboys had trouble stopping the run. The Vikings offensive line was usually winning the battles in the trenches, with the guards - Steve Hutchinson returning to form and Anthony Herrera returning from injury - making life difficult for the Cowboys. While the Vikings amassed rushing yards, it should be noted that the longest touchdown run of the night was actually from backup quarterback Joe Webb. Adrian Peterson accounted for 81 yards on only 14 rushes, and though that is certainly a discomforting stat line it is good to know his longest run was only 15 yards and the Cowboys stopped him from breaking a long one.

At this point, the Cowboys are struggling in the Game of Inches, but as the 1st quarter ends the tide turns. In the 2nd quarter the Cowboys begin to win those inches to take command of the game and go on to hold out and beat the Vikings...to be reviewed in Part II.