With each practice Tashard Choice missed, the volume on the conversation rose. Over the course of the 2010 campaign, the talk centered around him taking up residence in offensive-coordinator-turned-head-coach Jason Garrett's doghouse. After the season's conclusion, advanced analysis did him in. A close look at running back metrics gave the impression that Choice's stance as the do everything well, nothing great back had to be downed with a 'glass half-empty' shot of unsweetened Kool-Aid.

Absence doesn't make the heart grow fonder in the NFL, it does the opposite. Absence in this league will quickly remove you from fan's hearts; makes them forget what it is you bring to the table. Especially at running back, where quality performances by unheralded players at this position seems the norm, year in year out. There's always a that guy, a player with great collegiate production that didn't float to the top in the sea of pro potentialers.

Choice went down with a calf strain the first week of training camp; promptly giving way for the unsung guys to make some noise. With 3rd rounder DeMarco Murray also out with an injury, the fourth and fifth backs on the roster were now running with the 1's and 2's as Felix Jones' backups. With each practice missed, the rumbles that this team no longer needed Choice's services grew stronger. This includes some out loud (if typing can be considered out loud) musings from yours truly.

Choice finally returned to the field for practice last week, itching for a chance to quiet his critics. We can probably assume he heard them, too, as his twitter correspondences were peppered with self-motivational 'they doubt me' messages. He acquitted himself fairly well in his 9 snaps against Minnesota, even though his final stats show a meager three rush attempts while gaining 14 yards. I found it mildly ominous that on Tashard Choice’s first carry of the season, his great run got wiped out by a holding call. Mildly ominous until his third carry was the exact same thing, a big run sprung by a big hold. Sometimes it feels like moving forward is an uphill battle, and there was something metaphorical in the fact that Choice's progress was being muted by things outside of his control. Let's take a look at the play-by-play, with screen caps, on what Choice brought to the table. And yes, screen caps are included. 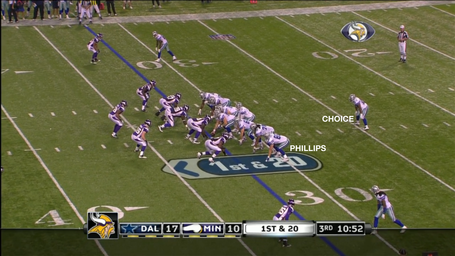 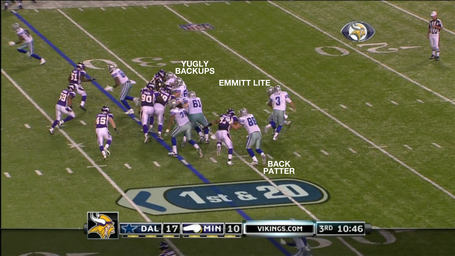 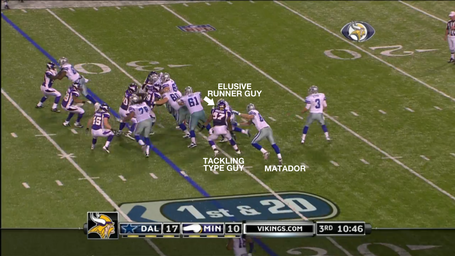 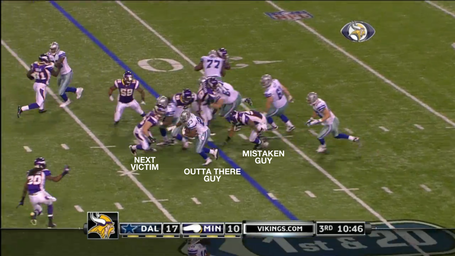 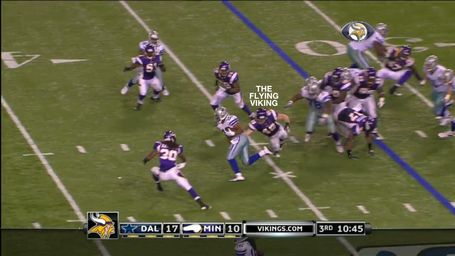 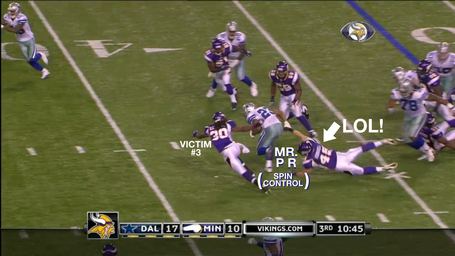 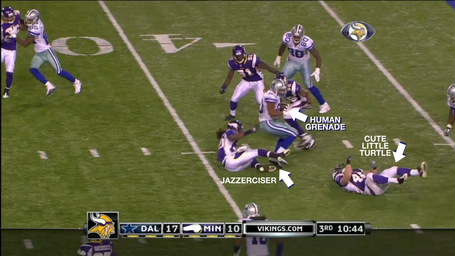 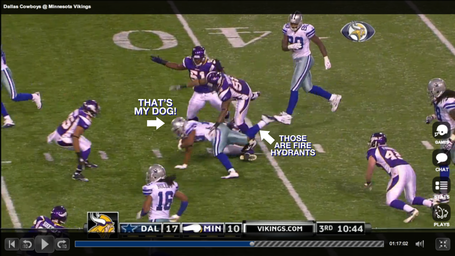 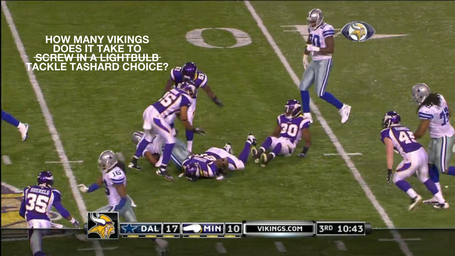