Some losses are hard to swallow; the Cowboys coughed up an almost sure-fire victory in the fourth quarter last night. There is a lot to like about this team, and that should never be lost amidst the frustration with the collapse. For evidence, follow the jump and check out the screen shot of the win probability graph; Dallas was dominating the Jets up until the end of the game. Alas, the effort didn't last a full 60 minutes and promising play by several of the Cowboys young guns was wiped out. Sean Lee and Dez Bryant look to be future Pro Bowlers in the same snap judgment reaction vein that says the Cowboys are doomed this season. BTB will continue breaking down this game and all it's complexities over the next few days before we turn the corner to San Francisco, but for now let's check out some reactions, news and notes from around the webisphere.

"That’s my route, that’s not a pick route," Witten said. "That’s not the design of the play. I don’t know. I probably need to bite my tongue right now. That’s all I’m going to say."

"This game came down to one or two plays, the plays that I gave them the ball," Romo said. "I cost us the game. I’ve got to do a better job right now."

Romo Not The Only One To Blame | NBC DFW

Article on some of the other things that transpired in the game, besides the three big fourth quarter mistakes. 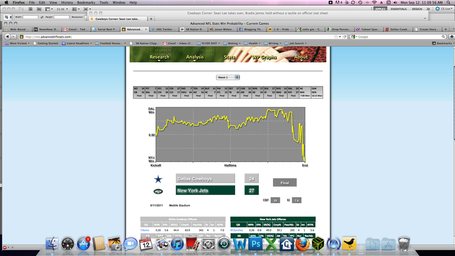 Jeebus. Talk about driving your car off a cliff.

"We didn't get a good enough shot on the X-ray," Jones said. "It's a high ankle. It's a fracture. It's something like that. Three or four weeks is what the doctors told me."

Scandrick left MetLife Stadium in a protective boot and will have more tests when the team returns to Valley Ranch early Monday morning. At one point in the second half, the Cowboys had their fourth (Alan Ball) and fifth cornerbacks (Bryan McCann) on the field after Mike Jenkins left with a shoulder injury.

Jenkins was in and out of the game, and should receive a lot of credit for trying to gut it out through numerous dings. When he returned, he made a brilliant open field tackle that led me to tweet the following:

Bryant suffered the injury when he took a helmet to his left thigh on a 12-yard punt return after the New York Jets' first possession. He caught only one pass the rest of the game after making two catches for 45 yards and a touchdown on the Cowboys' opening possession.

Owner/general manager Jerry Jones strongly hinted that he didn't want Bryant to be used on returns anymore, noting that Bryant's rookie season ended prematurely when he broke his ankle on a kickoff return.

"I'm just saying he's getting hurt on returns," Jones said. "He got knocked out last year and got limited in this game on a punt return."

The false start penalty late in the fourth was crucial. Romo was sacked four times and the team couldn't muster three yards a carry, but overall I was pleased with the young O line that went against the vaunted Jets D line rotation.

4. Tony Romo had some help in blowing a 14-point, fourth-quarter lead and losing to the Jets. But the way he played in the last 10 minutes, he can retire the Goat of the Week Award. With the Cowboys ahead by seven with nine minutes left, he foolishly dove for the end zone -- the traffic was way too heavy to think he had a prayer to make it -- and got stripped of the ball, losing it.

With a minute to go and the score tied, only the Lord knows what Romo was looking at. He badly underthrew Dez Bryant, and the interception into the waiting arms of Darrelle Revis led to the winning field goal.

Trying desperately to rally with eight seconds left, Romo wasn't ready for the shotgun snap, which hit him in the chest in a fittingly Keystone Kops moment to basically end it. I've defended Romo for a long time. He has some extended stretches of brilliance, throws a great ball, is accurate enough to be one of the great ones ... but Sunday night has to make the biggest Romo boosters question his judgment. How could he take such a huge risk on a third-and-goal dive that he could not deliver a touchdown on, and to follow that by hand-delivering the interception to Revis -- and the game to the Jets. A total, absolute, utter debacle for Romo.

Things from the Jets negative point of view.

We all know that Lee had a phenomenal game and staked his claim as the new lead ILB, but what is surprising is that Bradie James exited the game without a single tackle. Something to keep an eye on moving forward, he and Brooking seemed to be the rotation as Lee stayed in for most of the game.

the @BloggingTheBoys account is by far the best non official account out there in NFL or NBA...less than a minute ago via TweetDeck

@BloggingTheBoys You're doing an excellent job covering the #Cowboys game for me & providing stats on @Twitter since I can't see the game.less than a minute ago via TweetDeck

If you think the game day threads are awesome, jump on your twitter account and join me next week for all the in game goodness. Hopefully, we'll end on much better note.