The Cowboys did what they could to establish the run, but against such a formidable front seven not much space was available between the tackles. Instead, the Cowboys found seams across the middle and in one-on-one matchups, allowing their physical receivers to fight with the great cornerbacks for the Jets -- with the Cowboys coming out on top, for the most part.

Putting aside the frustration of the final ten minutes of the game, there were many positives to come away with from the game on the offensive side of the ball. The offensive line recovered from some early shakiness and the Cowboys passing game thrived on the deep ball, something no one would have expected against the Jets. Today, we'll take a look at five key plays in the game: three big plays and two very important third down conversions. 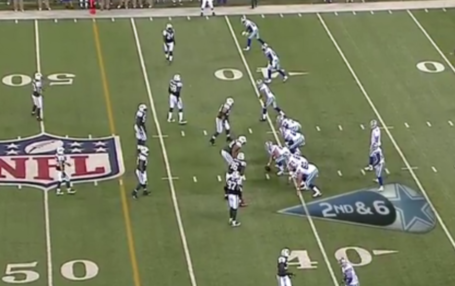 The Cowboys come out on their third offensive play of the game in a 1-back, 4-WR look with Romo in the shotgun. The Jets are playing man coverage on the outside with Revis and Cromartie, with both safeties playing close to the box before dropping back at the snap of the ball. With Austin and Bryant both lined up in the slot -- Witten and Ogletree on the outside -- the Cowboys have created a perfect mismatch with their best two receivers being covered by linebackers. 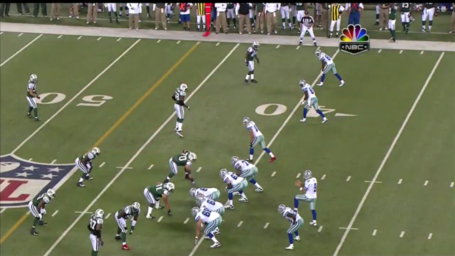 You can get another good look at the formation here. Harris (#58) slides left to cover Bryant. Austin is actually uncovered before the snap of the ball, but as we'll see -- he's just a decoy. 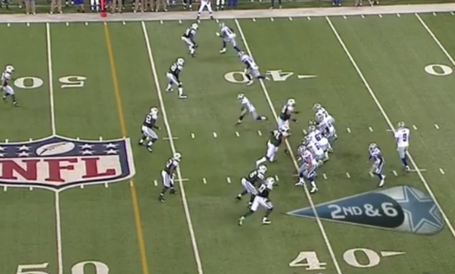 At the snap both inside linebackers drop back in coverage and Austin starts his move inside. Bryant makes an outside stutter to get Harris off balance. 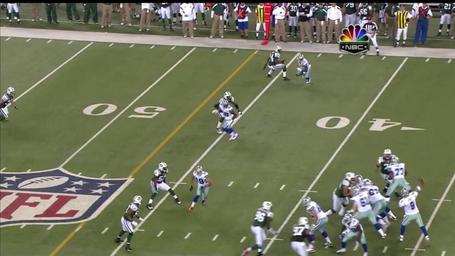 Better angle here. Austin runs a shallow crossing route that pulls the linebackers inside, as Bryant easily gets inside leverage on Harris. Both safeties, likely sensing a deep post route by Bryant or Austin, have fallen into a deep cover-2. This opens up plenty of space behind the linebackers. 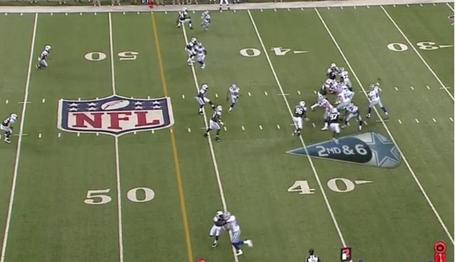 Here you can see just how much space Bryant has to work with over the middle, with Austin taking the attention of both linebackers. 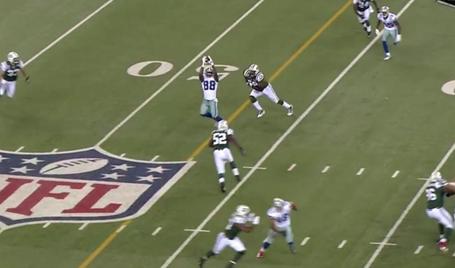 Bryant's great hands on display as he easily snags the rocket from Romo over the middle. Any guesses as to how might not have made this catch last season? 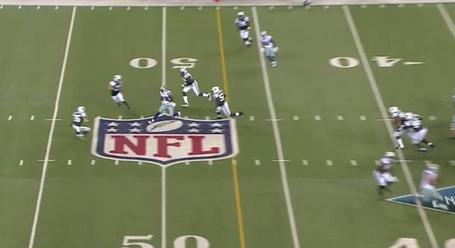 What should have been a 10-15 yard gain was turned into a long 42 yard pass play when the safety took a poor angle towards Bryant at the catch. You can see how Bryant's great acceleration with the ball caught the defense off-balance.

Conclusion: Garrett created an early mismatch with Rex Ryan's defense and the Cowboys took advantage. Both Austin and Bryant were covered in the slot by linebackers, making this an easy pitch-and-catch by Romo and Bryant. 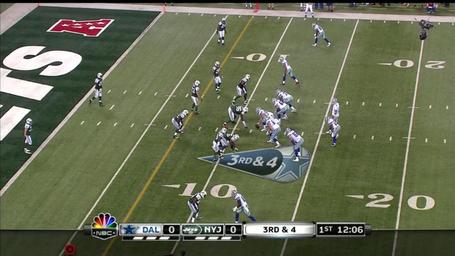 This was a key play on the opening drive. Third down in the red zone, something the Cowboys have struggled with the past few years. Once again, Romo is in the shotgun in a 3-WR set with Witten in the backfield, who goes in motion just before the snap. Ogletree playing wide right with Austin in the slot on the right side. 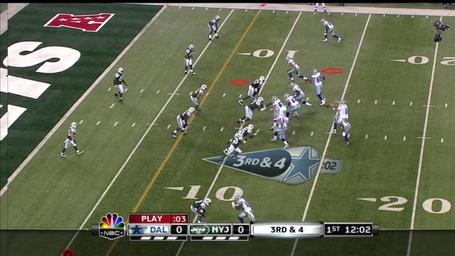 The key to this play is Jason Witten. As he goes in motion then peels off on a short route, he's covered in the flat by Calvin Pace. Not only does this take the Jets best pass rusher out of the play, but it creates a significant mismatch against Witten -- who as everyone knows is Romo's best option on third-and-short. 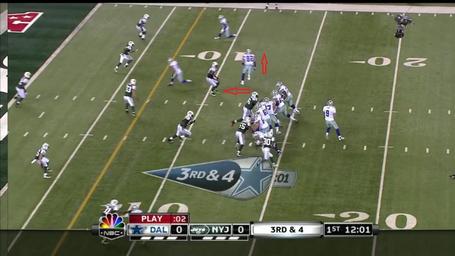 Cornerback Kyle Wilson recognizes this mismatch and hurries to his left to cover Witten, who is working hard into the flat. Pace drops back into zone coverage but he's preoccupied with Witten's route to the outside. Meanwhile, Revis has dropped back and given Ogletree a cushion -- and a clear shot to the inside. 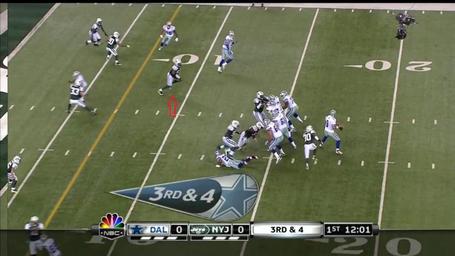 Austin clears out the linebacker while Witten's route distracts Pace underneath. Here's where it gets tricky. Romo is under heavy pressure and needs to fire the ball, and Pace has settled right into his throwing lane to Ogletree. There's a chance that Witten could get the first down -- but there's no time. 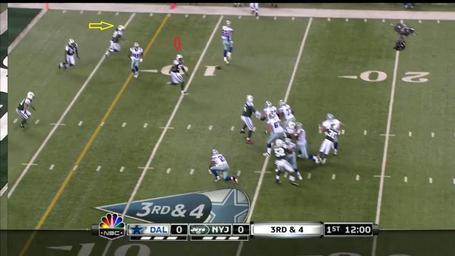 Pace cheats towards Witten too much and allows the pass to sail by where he had just been standing. With Wilson paying attention only to Witten and Revis giving Ogletree a nice cushion, there's a good target for Romo to make the pass for the first down. 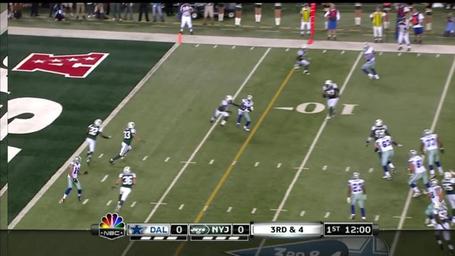 You can see here just how much Witten drew the defenders are Ogletree makes the catch. Both Pace and Wilson have taken themselves out the play completely.

Conclusion: Romo made a daring yet accurate pass to Ogletree for a key third down. Just a few plays later, the Cowboys would take the lead with a touchdown pass to Bryant.

Also, take note of Romo getting blasted as he releases the ball. Tashard Choice, in the backfield on third down, completely whiffed on an outside block and allowed his man a free run at Romo's blindside. This is exactly why Jason Garrett doesn't like Choice in the game in these situations. 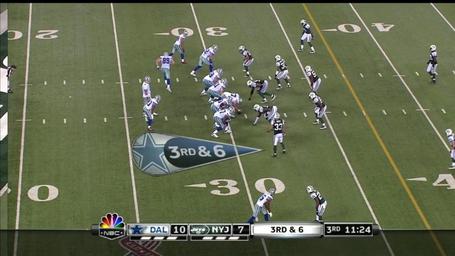 Once again a big third down play on a touchdown drive. The Cowboys have Ogletree out wide with the Cowboys in a bunch formation on the left, with Witten motioning out wide. Initially, the Jets are showing another 2-deep look. 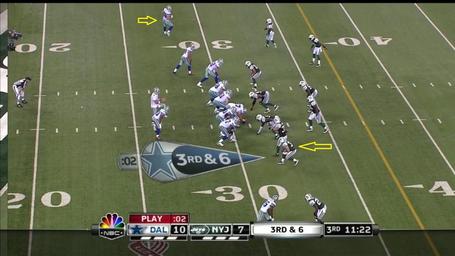 Just before the snap, the safety moves down into the box and the Jets show a heavy blitz is coming from an overloaded right side. Phillips goes out wide which opens up the coverage on the right side of the defense. 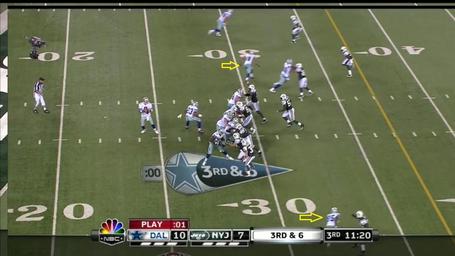 Phillips runs a clearing route up the left sideline while Austin takes another shallow crossing route in front of the defense. This draws the attention of the coverage and leaves Ogletree one-on-one with Darrell Revis, who is playing press coverage, yet allows Ogletree to get inside leverage off the snap. 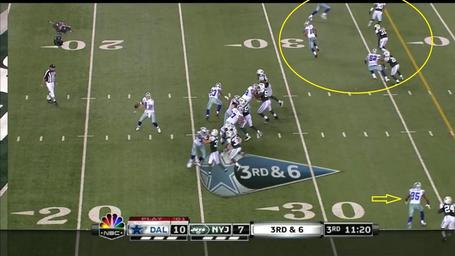 Two keys here. First, the Cowboys pick up the blitz perfectly on the right, with Tyron Smith and Kyle Kosier teaming up to negate an overload blitz on their side. Romo has a perfect pocket to hit Ogletree who has easily separated from Revis. Also, notice the man coverage up top and how the routes run by Byant, Austin and Phillips have opened up space in the middle of the defense.

Conclusion: The offensive line played the blitz perfectly and Ogletree ran a perfect route against the best cornerback in the NFL. Romo had plenty of time and space to make this throw, which went for an easy first down.

Sean Lee has just intercepted Mark Sanchez and was ruled out at the one yard line. This is where the Cowboys have had all sorts of trouble lately and Garrett comes out in a formation that shows a possible play-action pass, with Austin lined up offset on the right.

John Phillips is in the fullback position and goes in motion just before the snap. The line pulls hard to the left in a zone blocking scheme.

Witten and Doug Free are tasked with sealing off the left with Phillips in charge of leading the way for Felix off the toss. Notice Nagy gets overrun a bit off the snap but does just enough to buy time for Felix.

Here is the key to the touchdown. Witten and Kosier build a perfect wall, behind the goal line, for Felix Jones to run past. Phillips gets just enough of his man and the Cowboys score an easy touchdown on a toss right, with Felix not being touched on his way to the end zone.

Conclusion: This is the sort of run's we're expecting from Felix and this offense. He needs to have the acceleration to burst through that whole when it opens. This also shows just how valuable it is to have a couple of tight ends that know how to block.

The key to this big play to Jason Witten was the protection from the young offensive line. Witten is going to run a deep seam route against an overmatched linebacker, yet Romo needs time to wait for him to come open. The Cowboys provide him a perfect pocket. Notice how the Jets have all 11 players up near the box at the snap.

Witten lines up off tackle and takes off immediately on a seam route up the middle. He's covered by Eric Smith as the other linebackers cheat towards the box, and Phillips drawing coverage as well. The Jets rush four, with Felix helping out Free on the left side.

Tyron Smith plays Calvin Pace perfectly and Romo has a beautiful pocket to wait for Witten to come open. This is what he was looking for the whole time.

You can see here as Witten catches the ball just how much space has opened up in the middle. The safeties were playing close to the box off the snap and Witten easily exploited this with one of his signature routes.

Witten makes Smith bite with a quick move to the outside. As he makes his turn inside, Romo is already starting to release the ball.

Witten is easily open and the ball is already on its way as he comes out his break.

Conclusion: Perfect protection and perfect timing between Witten and Romo lead to the biggest play of the day for the offense.