Leading the Jets 7-0, the Cowboys defense played an integral role in giving the offense a chance to pad the lead. After Dallas scored on the game's opening possession, the defense forced a quick three and out. DeMarcus Ware abused Jets RT Wayne Hunter and administered a choke-slam-sack on the drive's first play, and got pressure on the subsequent plays. Ware was a force throughout the game, and looked to be in midseason form during the first week.

That was all to be expected. What the Cowboys didn't know to expect, was the breakout game of one Sean Lee. Lee was everything the Cowboys envisioned him to be when he was drafted in the 2010 draft's second round. We saw glimpses of his potential last season in the game against Indianapolis. Lee picked off Peyton Manning twice in that contest, returning one to the house for six. The ILB finished the 2010 season with a +9.4 cumulative grade from Pro Football Focus, on only 169 snaps, indicating that he was primed for a breakout season. If Sunday night's performance was any indication, we might be looking at a superstar in the making.

The week one grades are in, and for what it's worth, Sean Lee was one of the best inside backers to step on the field. His overall grade for the game was a +1.4. Lee's run stopping was by far the best part of his repertoire Sunday night, as he set the pace for all NFL linebackers in run defense rating with a +2.9.

Surprisingly, his pass defense graded out poorly, despite his interception and near pick-six. Lee graded out at -1.4 in coverage, as Mark Sanchez targeted the underneath middle of the Cowboys defense repeatedly. Lee's area of coverage was targeted a league leading 10 times (next closest was AJ Hawk with 6), plenty more times than the other ILBs on the team that rotated throughout the game, Bradie James (2 targets) and Keith Brooking (none). Lee was on the field for 55 snaps, as compared to 53 total for Brooking and Bradie.

Out of the 10 targets, Lee allowed 9 completions, the lone Sanchez miss being the interception. Now, he was being targeted, but a closer looks show that the quantity might be skewing the grade. Sanchez only accrued a 61.3 QB Rating when targeting Lee, and the linebacker gave up a respectable 9.1 yards per completion (17th for ILBs). The touchdown to Dustin Keller was credited to Bradie James, per PFF.

Here's a look at all of the plays that Lee was involved in, as well as the return of the Screen Capture Captions.

Jets go four wide, three to the right. Cowboys counter with a 3-3-5, Ware with hand down. Quick pass to Santonio Holmes from inside position, being bracketed by Scandrick and Lee. Both arrive to stop for a short five yard gain. In Lee's area, but not a negative play as his responsibility was clearly to keep play in front of him.

Lee is covering Keller, reads Mark Sanchez's eyes and releases Keller to come up and play Holmes. Pass to Holmes, tackled immediately for a gain of 5. A successful stop, but counted as a catch in Lee's coverage region. Forces a punt.

The first LaDanian Tomlinson drive, one of the craftiest backs of this generation.

Shotgun, Screen left to Greene. Lee does take a step back before attacking, then fights off LG block to make the tackle. First down Jets.

Lee in coverage on LaDanian Tomlinson sprinting to the left flat. Lee keeps LDT towards the sidelines and knocks him OOB for a gain of 5.

Sean Lee is keyed on LDT, and heat seeks his way to the opening of the line by the Jets blockers and meets him at the hole for a stop of 4.

Lee blitzes up the middle and meets Ware at Sanchez, forcing a quick incompletion.

Inside handoff to LDT, Lee crashes down and makes the tackle for a short 3 yard gain

Lee starts on line over LT, then drops into middle zone coverage. Quick pass to Keller who was lined up next to RT, who puts a move on Sean Lee and gets pass the first down marker. Lee quickly changes direction, and when Keller spins out a Sensi tackle, Lee is there to finish the play. He strips Keller of the ball, but he was already down.

Lee in coverage on LDT who leaks out into the flat and and catches the pass in front of Lee for a gain of 9. I don't see much more Lee could have done based on the coverage here. It's one of those 'this will always work against that D' routes.

Lee wasn't involved in any additional plays on this drive. As noted before the jump, the TD pass to Keller was on Bradie James. On the big LDT screen for 45 yards, Lee had responsibilities to the opposite side of the field.

Jets fake a run right, but Lee reads the play immediately, avoids the linemen and zooms in past left guard to assist Jason Hatcher and stop LDT for a loss of two.

Run play up the middle with Shonn Greene, Ware, Spears and Lee combine to stop for a short gain of  4. Lee fought off block by guard to get the assist.

Lee was substituted for on several plays this drive.

Lee in zone stays in front of TE, pass over them to Plaxico for a gain of 18.

Cowboys in a 3-3-5 with Spencer at DE, Lee on the line to his left, Ware opposite side, Bradie in the middle. We'll let the screen caps tell the rest of the story. 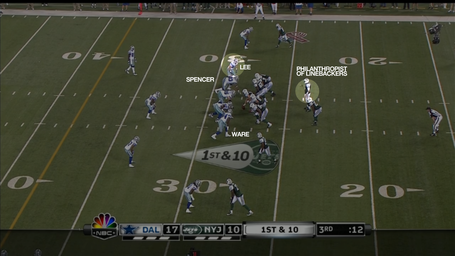 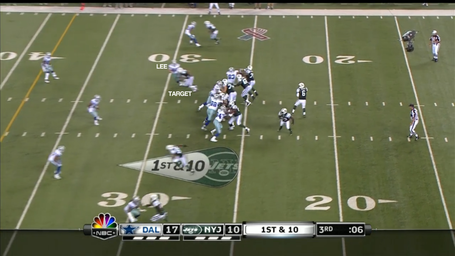 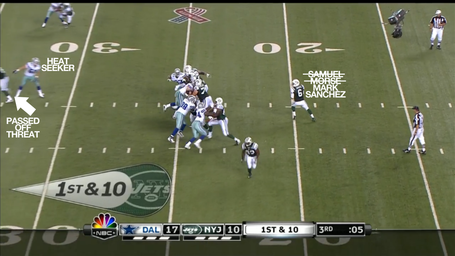 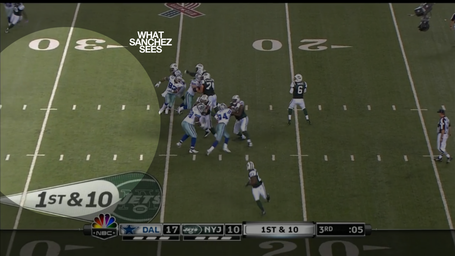 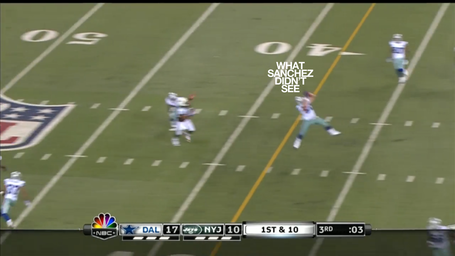 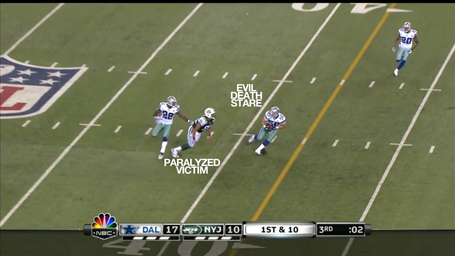 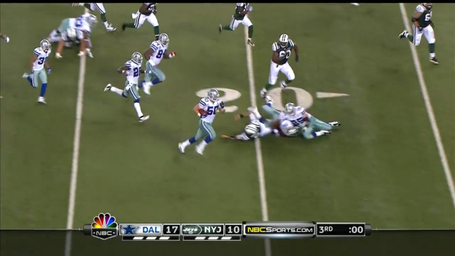 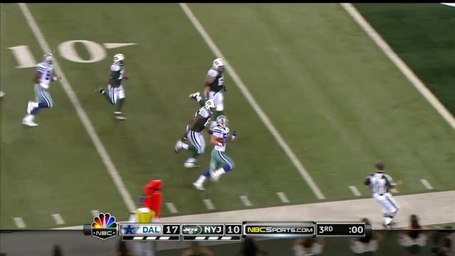 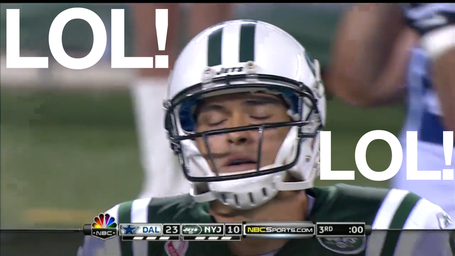 Lee in zone coverage, doesn't recognize O linemen coming out on the screen and is late to react to it, as Sensi clearly has Keller checked. Lee comes in to make the tackle, but could have prevented the first down if he was up more.

Shotgun run left side. Pulling RT clears out Jason Hatcher. Lee is engaged by the C, but peels off enough to get armon LDT and makes stop with Brooking, gain of 7.

Jets score two plays later when Plaxico pushes off McCann and catches a back shoulder fade.

Lee crashes down on the run play, despite getting shoved by LT Ferguson, pulls LDT down for a stop of no gain.

Lee in coverage on Keller 6 yards deep. Sanchez pump fakes twice as the three man rush closes in (not quick enough) The second pump fools Lee, who loses track of Keller and allows the completion to the Cowboys 46.

Rob Ryan brings the heat, sending seven including Lee and only dropping four into coverage. It's a double safety blitz, Church leaps up in the air to take away an option, and when Sanchez double clutches, McCray sacks him from behind forcing a fumble. Lee, who had peeled off from the RG block, sees the ball and makes a B-line to the bottom of the pile to recover the fumble.

Lee is on LDT, comes up and engages at the line then released him. Sanchez avoids the rush then completes the ball to LDT on the run. Lee has a chance to wrap him up short of the first down but can't. LDT gets the first down. Big play at the time, but the Jets got no more yards on the drive and punt.

Lee crashes in, peels off the block by the G and tackles Greene for a gain of 2.

The next play Alan Ball almost picks off Sanchez, but is yanked by Derrick Mason (another no call- this one would have pushed the Jets out of FG range) and can't close his hands around the pigskin. Incomplete pass next play, Folk FG on fourth.