Dallas Cowboys: Building Depth From Within The Roster

Share All sharing options for: Dallas Cowboys: Building Depth From Within The Roster

Depth. Always a concern for NFL teams, and it can be the difference between a successful season and disappointment. There is no better example than the 2010 Green Bay Packers, who suffered injury after injury, but kept putting backups into the lineup all the way to the Lombardi Trophy.

After only the second game of the season, the Dallas Cowboys are finding themselves in very much the same kind of place.  Coming into the game with key pieces like Terence Newman, Orlando Scandrick, and Dez Bryant sidelined, the team literally gutted out a win, but by the end it saw Tony Romo, Miles Austin, Jason Witten, Felix Jones and Phil Costa all injured to some degree.  Tony responded with an Emmitt Smith-like performance to come from 10 down and win in overtime, but at this point we can't be sure he will even be allowed to play against Washington.

Signing free agents is one solution to the depth problem. But a better solution, one that is more in line with the philosophy of Jason Garrett, is to develop the depth from within. The Cowboys are moving more towards young players.  Now the team is going to find out just how much depth those young, hungry players provide.

Warning:  Mathematical type stuff after the jump.  But just a little.

Relating to this, I have a theory I call the 10-80-10 principle. It is based on the statistical idea known as the Bell Curve. 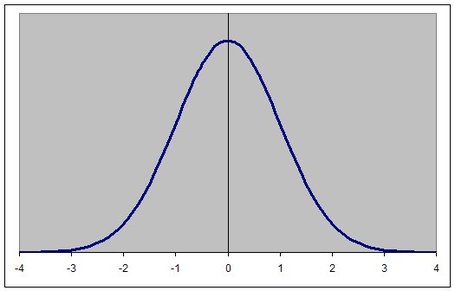 The Bell Curve is simply a way of showing that when you look at the distribution of an attribute like talent or performance, most people fall in the middle. They are fairly average. (It applies in many other things besides people, but I am talking about football players here.) Now in the NFL, being average means you are still a lot better than the vast majority of people out there. But within the population of players in the league, there are some that fill out the extremes of good and bad, and most are in the middle.

On the high end, you have the stars, that 10% of players that stand out and are clearly among the best at their position. Obviously, in building a team, you want to have as many of these players as you can get. If all teams had an equal distribution, you would expect each team to have five or six of these players. But the teams are not all equal. Some have more than that, others less. The Cowboys, in my admittedly Kool Aid flavored view, have more than many teams.  I would count DeMarcus Ware, Jason Witten, Miles Austin, Mat McBriar and L. P. LaDouceur as clearly in the top 10% at their positions (this counts towards the specialists, too). On the rest of the roster, Tony Romo, Dez Bryant, Jay Ratliff, Felix Jones, Doug Free, and based on the first two games of the season, Sean Lee, may also be part of this elite category, although they are in no way proven at this point.

The bottom end consists of players that do not contribute to success. This group is composed of young players who just made the cut and are only going to be around a year or two, and players who due to age or injury are no longer able to perform at the level they once could. In 2010, the Cowboys suddenly found themselves with too many of these, particularly the latter. Obviously a team must seek to keep this number as low as possible to maximize its hope of surviving the wear and tear of the season and making a postseason run.

However, most of any team is going to be that 80% in the middle, players that are NFL-caliber, but that are not superstars. And these are the player with which a coaching staff earns its money and makes the most difference.   The top 10% are players that have a combination of talent and motivation which will lead to their success even if the coaching is not all that great.  Take Ware and Witten, the two most obvious All Pro players on the Cowboys. They will excel even if the coaching is not all that great and the rest of the team is underperforming. Conversely, the bottom 10% are lacking in those things, either from never having them or having lost them, and will not be able to deliver what the team needs no matter how well they are coached.

But the middle group, the majority of the players, will respond. They can be coached up. In some cases, they will have to be in the right scheme, but given that, they can be taught and trained to be important contributors to the success of the team. Looking at how the Cowboys offensive line and defense did under the adverse conditions of the lockout limited offseason, it seems clear that Dallas has coaches that are very good at getting the most out of those "average" talents.  And good coaching and training sometimes will take a talent you thought was average and uncover some elite potential in them.

There is a limitation in getting the players in that 80% that are not starters ready.  They are not going to get real game snaps.  There is nothing that can replace the experience of going on the field and playing when everything counts.  Given that, the coaches have to do everything they can to prepare these bench-warmers to be ready to go in at a moments notice.  Every player who is active on game day has to be ready to step in and do his job.  They have to be mentally prepared, and they have to be taught and trained in practice to have a chance of stepping up.

These are the names the team will have to depend on for depth this year if it is to have any success:  Jesse Holley. Kevin Kowalski. Bill Nagy. DeMarco Murray. Josh Brent.  Alan Ball.  Danny McCray.  Bryan McCann.  Sean Lissemore. Dwayne Harris.  David Arkin.   Jermey Parnell. Alex Albright. Phillip Tanner. Barry Church.

Against the San Francisco 49ers, the depth of the Cowboys suddenly was put to the test.  Kowalski had to go in for Costa.  And with Dez out before the game and Miles Austin's hamstring injury, suddenly Tony Romo faced a three point deficit with a wide receiving corps of Kevin Ogletree, Jesse Holley, and Dwayne Harris.

At that point, a betting man would not have been likely to give the Cowboys much chance.

At that point, Jesse Holley showed that the Cowboys may be doing a very good job of building their own depth from within.  A player who had never caught a pass in a regular season NFL game had three key receptions for 96 yards, helping set up the tying field goal and then effectively ending the game with his stunning catch and run to the one-yard line in overtime.

If he had not come through, the Cowboys would almost certainly be 0-2 and doom would be settling darkly in the psyches of many, even most fans.  Instead, the Season of Hope is suddenly alive and well.

Depth appears to be something that will play a huge role early in this season.  Based on how the Cowboys responded against San Francisco, the situation may not be as ugly as it once appeared.  That seems to indicate that the team has very few of that bottom 10% on the roster.  And that the coaching staff (and some of the veteran players) have done a good job getting the backups ready.

In the last game, it made all the difference.

(Note:  This was written before word came out about Tony's punctured lung. - Tom)