Staring Into A Cracked Crystal Ball: Whither the 2011 Cowboys?

Share All sharing options for: Staring Into A Cracked Crystal Ball: Whither the 2011 Cowboys?

Is two weeks too early to try to figure out what type of a team the Cowboys are?

After two weeks, the Cowboys have a 1-1 record. They've scored 51 points and allowed 51 points. That looks like a pretty middle-of the road team. Of course you could argue that this is impacted (positively or negatively) by the strength of the two opponents so far, the injury situation, the coaching changes or any other factor for that matter.

So the question is, are the Cowboys a team that can make the playoffs, or is this a team that will have trouble putting a winning record together?

After the break, we look at some stats to try to get a better feel for where the Cowboys currently stand.

This formula was developed to measure overall team strength, on the hypothesis that a team's true strength could be measured more accurately by looking at points scored and points allowed, rather than by looking at wins and losses (for more details, go here). This is the NFL version of the formula:

With the formula, we can (attempt to) project how many wins we can expect for each NFL team based on the results of the first two games. Of course, two weeks does not pass the sniff test for any kind of statistical validity, but bear with me, it could be fun.

Before we fire up our calculators for this year, here's a look at how the Pythagorean Wins developed week by week for the four NFC East teams last year: 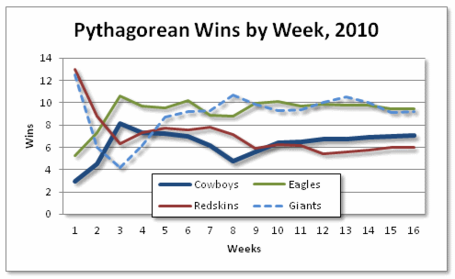 After a rocky first three weeks in the NFC East last year, the Pythagorean Formula began predicting the Eagles and Giants as 9-10 win teams. The Cowboys and Redskins also started zeroing in on the 6-8 win range fairly early. The point here is that barring significant changes in a team's performance, the formula can be a good early predictor of what a team's eventual record could be.

With 51 points scored and 51 points allowed, you don't need a fancy pants formula to tell you're looking at an 8-8 team, and that's just exactly what the formula currently projects for the Cowboys: 8.0 wins.

Of course, this is not a prediction, it is merely a projection based on the currently available data. As the data changes, so will the projection. So obviously, there's room to improve that projection for the Cowboys. At the same time, the more data points the model gets, the more robust the projection will get.

Last year, I did the exact same exercise after two weeks, and the projection for the Cowboys at the time were 4.5 wins. That's not too far off where they eventually ended up. Here's what I wrote at the time:

I'm not suggesting that the Cowboys will actually end up with four to five wins this season, but with the way they've played so far, they could very well end up there.

As to whether the Cowboys can make the playoffs, or whether they'll end up at 8-8, the jury is still out. We'll revisit this formula frequently over the course of the season, and after the next two games we should have a pretty good idea where this season could be heading. Two solid wins would go a long way towards improving the Cowboys' 2011 projection.

With two weeks in the books, where do you see the Cowboys this season?

With all of the above in mind, here's how the other 31 NFL teams stack up after two weeks: