While the bulk of the Dallas offense was spending time in the trainer's office, the defense closed its ranks and may be getting a bit overlooked when it comes to credit for Sunday's win. Over the 49ers final three drives, Dallas only relinquished 28 total yards to San Francisco. The Dallas offense had three consecutive three and outs before the late first-half touchdown, which means that the defense never got much chance to rest on an unusually hot day in San Francisco.

With 14:40 left on the clock in the fourth quarter, the Dallas Cowboys had to punt the ball away from inside their own 20, trailing 21-14. An injured Tony Romo had just returned to the game and led a fourth three and out. The 49ers returned the kick back to their own 44, and thanks to a holding penalty (unreported by the crack broadcasting team) on the punt, they started their next possession at the Dallas 46. DE Marcus Spears and NT Jay Ratliff stuffed a Frank Gore run for a short gain of two on first down.

On second down, the Niners used an eight-man line (seven linemen, an inline tight end plus a fullback for good measure) to gain five yards as ILB Keith Brooking was matriculated eight yards down the field by the pulling left guard.

The formation jumped out to me immediately when reviewing the tape, as I use it ALL the time in the Madden video game. Goal Line package, move TE1 to TE2(left side), substitute TE2 with OT3(next to RT) and TE3 with OT4(next to OT3).The formation was so unconventional, the referees didn't realize that one of the linemen failed to report eligible until they were back in the huddle. A five-yard penalty pushed San Fran back to 2nd and 13.

Before we get to the good, it must be mentioned that Brooking had what appears to be a disastrous game.

He was consistently being pushed backwards by linemen and running backs on rushing plays. The soon-to-be-discussed leverage penalty was just the icing on the cake. Dallas had flirted with the penalty several times over the course of the last month but had escaped the flag. On this occasion, Brooking didn't have enough athleticism to hurdle the line without using his teammates as a springboard and was caught for a crucial, potentially game-ending infraction.

Following the penalty and with the help of Chuck Norris Sean Lee, Anthony Spencer snuffed out the next Gore run for no gain. On third and 13 with Alex Smith in the shotgun, Rob Ryan dialed up a 2-3-6 formation. Ratliff and Jason Hatcher were with their hands down with Spencer, DeMarcus Ware and S Barry Church in between them standing up. Lee is a few yards back with Mike Jenkins, Alan Ball and Frank Walker at corner. Safeties Gerald Sensabaugh and Abram Elam were in deep coverage. On the snap, the four man rush on the edges opened up a lane and Smith took off. He might have had a shot at the first if not for a shoestring stop by Lee.

That play would be Lee's tenth and final official tackle, eight solo and two assists on the game. Pro Football Focus credits Lee with six solo tackles and six stops, a perfect 100 percent. A 'stop' is as follows:

It’s when an offense fails to get:

That's quite an impressive tackling exhibition by Lee and it earned him the highest rating by a Cowboys defender, +2.9.

The next play was the successful field goal attempt and the above referenced Brooking penalty. On a drive where the 49ers were obviously trying to run off time, the front seven played stout defense to force an elongated three and out. 24-14 San Francisco.

Now, the final three defensive stands hold some good information to digest. First, the 49ers offensive line didn't give up a single sack in their victory over the Seahawks in week 1. On the last two drives, the Cowboys secured their fifth and six sacks of the game. A little discussed fact of the Ryan defense (Rob and his brother Rex in New York) is that they don't send the most pressure on third down; they actually dial it up more on early downs than third. Let's head to the play by play. 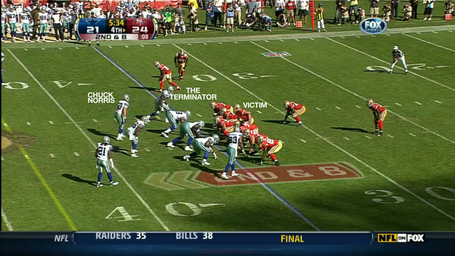 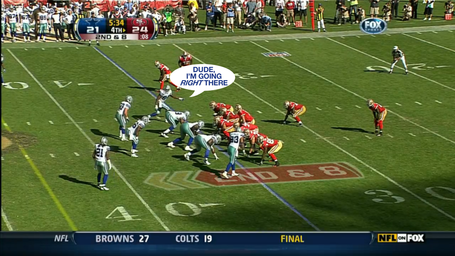 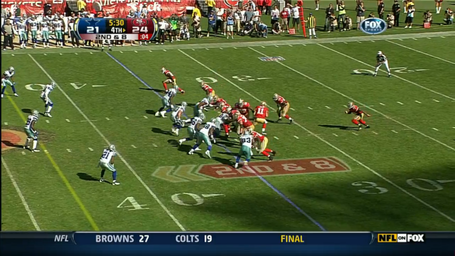 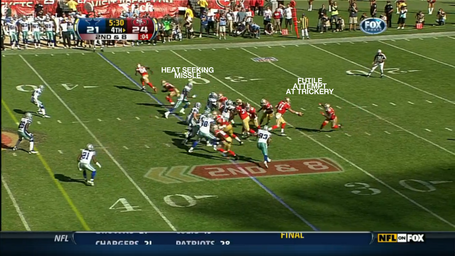 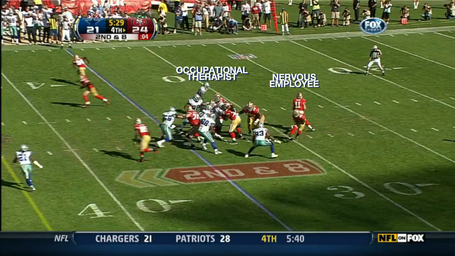 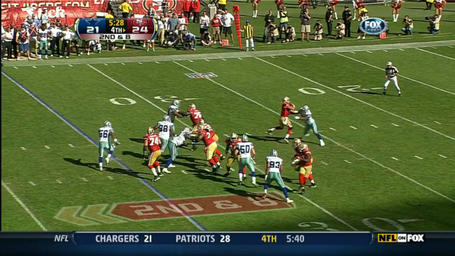 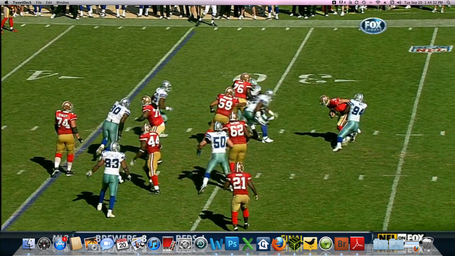 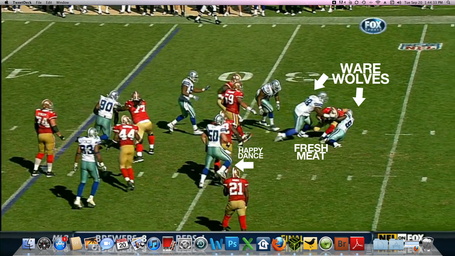 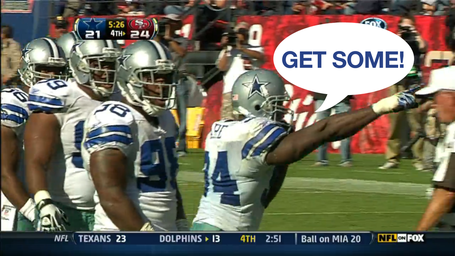 Romo would then lead the team on the game-tying drive, punctuated by a Dan Bailey field goal with no time remaining in the quarter. Overtime. The Cowboys would lose the coin flip and have to defend their end zone one more time. David Buehler didn't mishit this kickoff and the touchback forces San Francisco to start at their own 20.

We all know what happened next, Troy Aikman to Rocket Ismail Tony Romo to Jesse Holley and a Cowboys game-winning field goal. The offense gets all the accolades, but the defensive performance down the stretch was a hopeful precursor of everything we want to see out of Rob Ryan's defense and the Cowboys front seven.