As we all marvel at the heroic efforts of Tony Romo, Jason Witten and Miles Austin (among many others) on Sunday, I sat down to go through the game tape a second and third time to watch this game without the emotions behind it. At the end of the game, with the Cowboys winning on a chip shot field goal in overtime, I thought to myself that aside from a disastrous second quarter when Romo lost the ability to hit the side of a barn with his passes -- the Dallas Cowboys played a decent game overall.

The defense held their own against a supposedly good rushing team and while there were certainly some issues in the first half, the secondary didn't embarrass themselves against an Alex Smith-led offense. Aside from a great tackle across the middle, I didn't notice Abram Elam once in this game; compared to last season's horrendous play at safety, I'd say this is a big step in the right direction.

Breaking down the offense was tough, however. After Romo was injured on the third play of the game and he walked off the field after the first drive, he lost his ability to step into throws and to lead the offense. The Cowboys failed on five straight third-down conversions until they were assisted by a boneheaded offsides penalty, and Romo had seven straight incompletions in the first half. When Jon Kitna stepped in, it was like the Cowboys went into hyperdrive and each play happened much faster than it needed to -- which directly led to the two costly interceptions.

In today's offensive breakdown, we take a look not just at the big plays but at some of the costly plays as well. 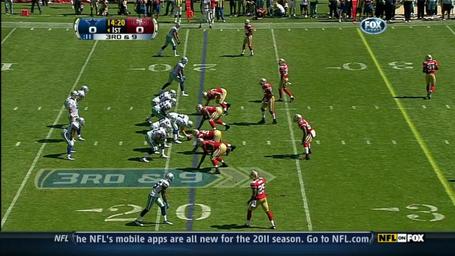 This was a big third down completion to Jason Witten across the middle that kept the Cowboys opening drive alive. It was indicative of just how perfect the timing between Romo and Witten really is and how important that timing is to this offense.

This is also the play where Tony Romo's ribs were injured. 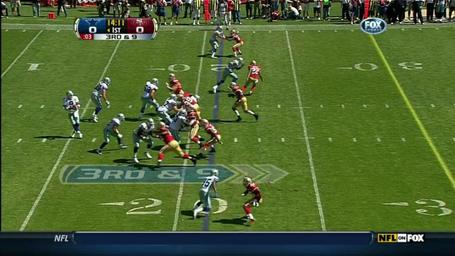 The Niners played a lot of man coverage against the receivers, with a two-deep zone scheme for the safeties over the top. They played careful with their inside linebackers, who were sure to blanket any backs coming out of the backfield. On this play, a corner back is one-on-one with Jason Witten out of the slot with safety help over the top.

Here you can see that Witten has started an inside move which the corner immediately cuts off. Kyle Kosier has lost his block on the inside and it is as this exact moment that Tony Romo begins his release of the ball. The Niners showed a great ability to close on the quarterback in a very short amount of time.

Here you can see the ball is already released, yet Witten is still covered (apparently) by the cornerback. Yet Romo and Witten have such timing, Romo has thrown the ball towards the numbers. If you look closely, you'll notice that Romo has been hit hard as he's releasing the ball -- which exposed his ribs. 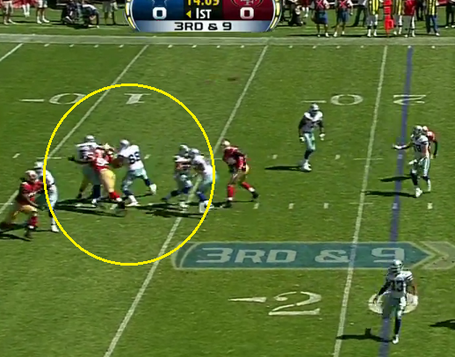 Here are a few close ups of the moment of impact. You'll notice that Romo's arm is still out after the release and the defender's helmet has crushed against his armpit and upper chest area. 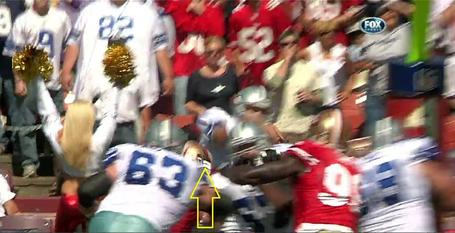 The moment of impact from another angle. I know that Fox kept showing that Carlos Rogers hit, but this was the actual moment of injury. 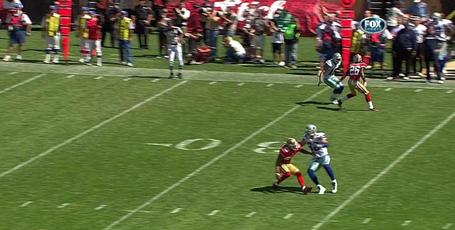 Back to the pass, this moment above is when Romo has released the ball. This timing is essential to the Cowboys offense. 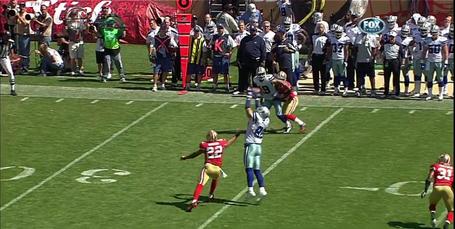 You'll notice how far toward the numbers that Witten has moved to catch the ball. Romo placed a perfect pass a good 5 yards outside the defender and in a place where only Witten could get to it. With the safeties typically playing deep, this was a matchup the Cowboys took advantage of while Romo was able to actually throw the ball. 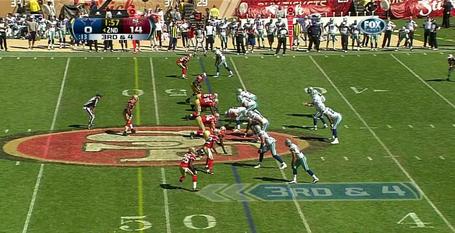 This was the play directly after a failed third-down attempt was nullified by an offsides call against San Francisco. The Cowboys come out in what is turning into one of their most productive passing alignment, with the top two receivers lined up in the slot. Martellus Bennett starts off in the backfield, and the Niners play press coverage against the pass with two safeties once again over the top. 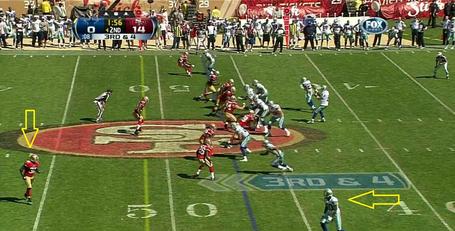 The key, once again, is the motion of the tight end going out wide. Last week, this exact same formation, yet reversed, opened up a big gain for Dez Bryant across the middle. This time, the targeted receiver is Miles Austin. With Bennett going out wide, this draws the safety down in coverage - who obviously wants to ensure a receiving threat is not left uncovered. 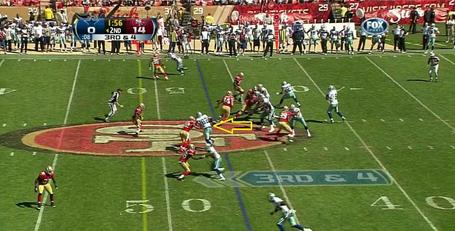 Once again, Witten across the middle draws two linebacker in coverage. You'll see Bennett run a deep route on the near side, which keeps the attention of the safety. Austin starts with an outside move against the press coverage of the cornerback. 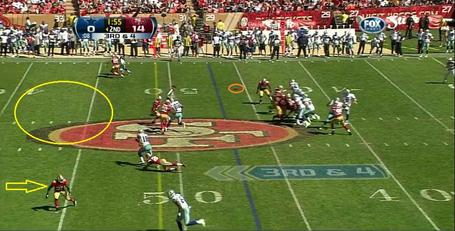 The safety has his back turned completely to the inside of the field, the defender covering Austin falls down as he makes his inside move. There is now an incredible amount of space -- once more -- for the receiver to work with after the pass. Once again, this is very similar to the play that Dez Bryant broke open early in the Jets game. Miles Austin makes an easy stutter step move against the lone safety remaining and he's off to the races. Even at about 75%, no one catches him. 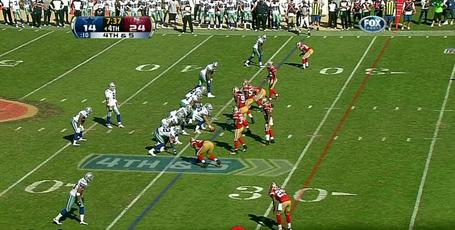 Once again, the timing between Witten and Romo is the key to making perhaps the biggest play of the game. Fourth down inside the Niners territory. Instead of attempting a 51-yard field goal with over seven minutes to go, Garrett puts the ball in Romo's hands. The Cowboys come out with Bennett in the slot and Witten lined up off tackle. 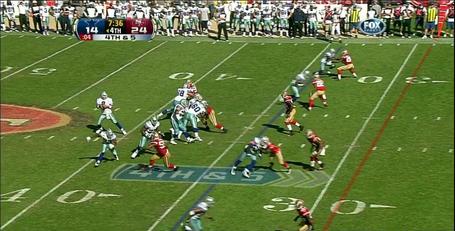 Once again, you can see here that the Niners are in man coverage underneath with two safeties deep. After showing blitz pre-snap, the linebackers drop back in short coverage and only send a three man rush against Romo. They know the Cowboys love to hit the tight ends over the middle on these sorts of plays and they take that away at the snap. Austin runs a clearing route on the near side, while Witten fakes an inside route before breaking outside. 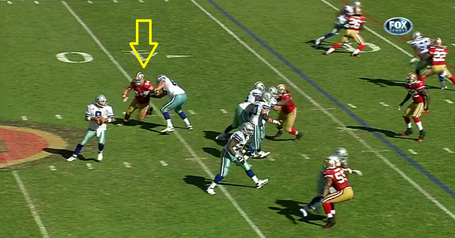 This is how close the Cowboys came to disaster. Not exactly having the best game of his career, Doug Free allows a rusher with a clear path around him and to Romo. 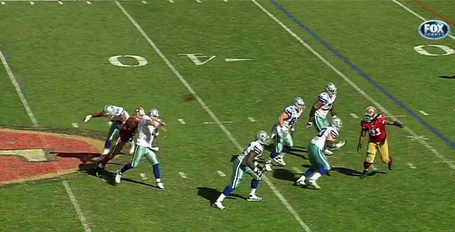 Only Romo's insanely quick release saves the Cowboys here, as Romo was able to get the ball off just as he was being blasted from the blind side. 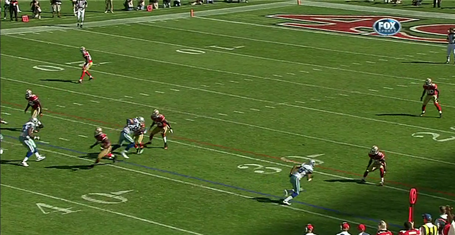 Here is a good look at the routes run by Austin and Witten, against the two-deep zone and man coverage. The cornerback covering Witten has inside help by a linebacker and Austin is looking at over-the-top coverage. He runs an outside fade down the sideline which draws the safety and corner away from Witten on that side.

Witten breaks for the outside and the cornerback sticks with him. It's actually very good coverage, yet once again Romo is releasing the ball as Witten makes his break and puts it in a spot where only his receiver can get it.

This isn't even fair.

Plays #4 & #5: I've combined two plays for our final analysis -- the goal line attempt nullified by a timeout and the failed 3rd down run just before the tying field goal attempt. 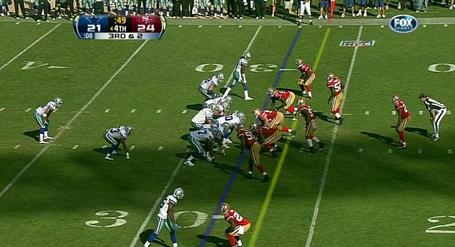 Above, we have the pre-snap formation of the third-down running play on third-and-short. Austin is in the backfield, with Witten motioning from right to left before settling in the slot just before the snap.

Here is the exact same formation, this time on the goal line on the first drive of the game. You'll notice that the Niners are playing each play similarly, bunching up the middle expecting an inside run of some sort -- even with Austin in the backfield. 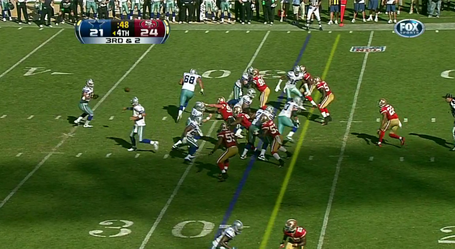 In the 4th quarter play, Free breaks off to lead the way around the outside. Holley and Witten collapse to the interior and Free has ample space and room to lead Austin to what should be a big gain. Yet, Austin looks like he's already made up his mind to break inside, despite the play being designed to go outside......

Which is what he was going to do on the goal line back in the 1st quarter. Free has space and time to lead Austin around the edge and if it weren't for a timeout -- no explanation given on the reason -- then the Cowboys had an easy touchdown. I'm sure this was on Garrett's mind when he made the same play call late in the game on a crucial third down.

Instead, Austin breaks inside -- exactly where the Cowboys are blocking the defenders into. You'll notice that Holley, Witten and Free are all blocking for an outside toss, yet Austin attempts to get inside. He fumbles the ball and only Doug Free's awareness saves this from being one of the most disastrous plays in recent Cowboys memory.

Garrett took heat after the game for the play call and said it was a bad idea. Yet it had worked early in the game before he called that timeout (at least, looked like it was going to work) and if Miles Austin had just followed his blocker around the edge, we'd likely be calling Garrett a genius for a gutsy play call.

Instead, Austin fumbled and was injured. Such is the game of football.