With six offensive starters out with various injuries, the Dallas Cowboys' offense looked rather thin at practice yesterday. So thin in fact that the Cowboys took it easy at practice. Tom Orsborn from the Express News writes that Jason Garrett downgraded Thursday's practice to a non-contact affair.

"We've got a lot of guys banged up and evidently we needed (a light workout)," linebacker Bradie James said. "I never thought Jason Garrett would give us anything off, but I'm happy he did."

With the rash of injuries, the Cowboys could potentially start three true rookies on the offensive line this week. If Phil Costa doesn't play, Kevin Kowalski will get his first NFL start at center. Bill Nagy will start at left guard while Derrick Dockery is out with a knee injury. And Tyron Smith is the man at right tackle. Kowalski said he is ready.

Romo's performance against the 49ers could very well turn out to be one of his career defining moments. Bradie James said as much yesterday:

"The legend has begun. Punctured lung and all. Whatever it is -- punctured spleen, kidney, whatever it is, he's going to be out there."

An because you can never have enough positive things to read about your quarterback, here's the win probability graph for the 49ers game, courtesy of AdvancedNFLstats.com, who also provide some commentary on Romo's performance right after the graph. 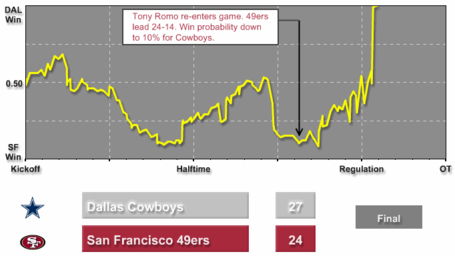 From here on out, Romo went 11-for-14 for 195 yards and a touchdown, an insane 13.9 yards per attempt. He threw two of the most important passes of the game, a 25-yard touchdown to Miles Austin (+0.08 WPA) and the real game-winner, a 77-yard catch-and-run to Jesse Holley, who killed the hopes of hordes of soulless fantasy owners when he was dragged down at the 1-yard line. But it was enough to kill the hopes of the 49ers as well, as the play was worth a staggering +0.49 WPA, just under half of Romo's fantastic +0.96 total on the game (second of the week to the aforementioned Fitzpatrick).

And he did it on a broken rib.

For the first time this year, both starting corners will be ready for the game. Abe Elam and Bradie James are happy Terence Newman will be back against the Redskins.

"It's definitely great to have a Pro Bowl corner and a mainstay like Terence who has been here and is a solid player for us,'' Elam said. "He's an experienced guy who knows how to get prepared and can go out and challenge the team's top receiver.''

"Just happy to have him back,'' linebacker Bradie James said. "It's good to see ol' 41 back out there, moving around at practice. "He's going to help us."

Outside of Orlando Scandrick, the Cowboys defense looks to be back to full strength. And not a minute too soon, as the Cowboys may need to lean heavily on the defense for the next two weeks until the offense gets some of its starters back to full health.

The only defensive player still missing is second-round pick Bruce Carter, who said he'll be released to practice on Oct. 23, which is the Sunday the Cowboys host St. Louis. Theoretically, the first game he could play in would be the nationally televised Sunday night game at Philadelphia on Oct. 30. But it's more likely that the Cowboys will ease him into the roster slowly, starting with special teams work at which Carter excelled in college.

Dez Bryant remains a game-time decision. While there has been all sorts of unfounded speculation as to Bryant's status, Garrett set the record straight yesterday.

"The degree of the injury is really the issue," Garrett said. "It really swelled up on him soon after (the opener). He didn’t have very much flexibility at all, all throughout last week. We were all hopeful and optimistic but it’s just been a progression. I think it’s gotten better as the days have gone by."

Garrett also ruled out that Bryant might have had a setback of some kind.

"I don't think he had any setback," coach Jason Garrett said. "I think everyone was hopeful and optimistic because it was a thigh contusion, but again the degree of the injury is really the issue. It really swelled up on him soon after that game. He didn't have very much flexibility at all all throughout last week. "We were all hopeful and optimistic, but it's just been a progression. I think it's gotten better as the days have gone by."

In a sign that the world may not be ending after all, Kitna fully expects Romo to play.

"I fully expect him to play," Kitna said after Thursday's practice. Kitna is taking the first-team snaps in practice during Romo's absence. "I try to do things just as he would do them," Kitna said. "I don't want to change anything for what those guys are used to so far."

Kitna is nothing if not a team player, always mindful of his and Romo's role on the team.

"Hopefully I'm just taking practice reps and Tony will be able to get back out there," he said. "For me, I'm just trying to go out there and have a good practice, give the other guys a chance to get a feel for things, and hopefully I'm just practicing."

Here's an overview of the Cowboys' walking wounded.

Injury Report (via the NFL Media department) for the game against the Redskins: