What Hogs Haven Is Saying About The Dallas Cowboys

Share All sharing options for: What Hogs Haven Is Saying About The Dallas Cowboys

Dallas Cowboys. Washington Redskins. Heck, even the team names declare that these franchises must be enemies.

It's one of the most storied rivalries in the NFL. In recent years it has not had the meaning it once did, as both teams have had some rough times, but this year there is some hope for both teams to improve on last year. And in this early meeting, Washington is a somewhat surprising 2-0, while Dallas is coming off a gritty, come from behind win. This one has that old fire burning again for two fan bases that, frankly, just don't like each other all that much.

But, hey, that what makes it all so much fun. I cruised on over to Hogs Haven for my weekly review of what the other guys are saying about the Cowboys and their fans. It was another interesting trip, with useful analysis and some good old fashioned bad-mouthin'.

One article you may have read already as a fanpost at BTB is also on the Haven front page. It says The Redskins/Cowboys Rivalry Deserves Its Spot Among Great Rivalries. I can go with that (although that really should be Cowboys/Redskins).  It points out that this may be the only great sports rivalry that started before one of the teams existed.

In order for the Dallas franchise to be approved, it needed unanimous approval from all the other owners. I'll give you one guess as to who was the only owner in the NFL that opposed approval of the Dallas team.

Now that is how to do a rivalry.  Check out the whole article for some good stuff.

More from Hogs Haven after the jump.

Here is an idea I kind of like.  The site has a weekly preview of some good NCAA games, with some likely draft prospects highlighted.  And it looks at some small schools, too.  A sample of the analysis:

Quarterback Ryan Tannehill (6'4", 220) - For the first 2 and a half years of his college career, Tannehill was one of the Aggies top receivers. Last year though he took over as their top quarterback, and hasn't looked back. Tannehill is pretty advanced for a guy who's been running routes the past couple of years, and while the offense doesn't show it, he has the speed and athletic ability to be a threat running the ball as well. Right now he appears to be a solid 2nd rounder, but I love his upside and think that he could have franchise quarterback potential. He'll probably need a year or so to develop on the bench, but his future is extremely bright.

Nice write up, and a good eye for talent. Sounds like someone to watch.

Did I mention that I'm an Aggie?

Our Dave Halprin did his weekly exchange of questions with Hogs Haven. We get to see the answers to Dave's questions here at BTB, but you can go to their version of the 5 Questions and see how Dave responded to them. Here is his take on the impact of losing Stephen Bowen to the Redskins:

When it happened, I thought it was a big deal. Now, not as much. Jason Hatcher has been playing inspired ball in the first two weeks, he's thriving in Rob Ryan's system. The rotation of Hatcher, Marcus Spears, Kenyon Coleman, and Sean Lissemore has been tough against the run, and efficient in the pass rush. I like Bowen as a player, and lobbied hard for the Cowboys to keep him, but so far, it really hasn't hurt us in losing him.

The big story for Washington, of course, is the 2-0 start. An article on 4 Early Season Developments covers some of the things contributing to the fast start.  Based on my look at the Cardinals-Redskins, the points made here are pretty good, especially this one:

Hightower, Helu looking like the real deal: What's been interesting to watch is the complete reconstruction of the Redskins backfield in such a short amount of time.

This points out that the Washington team coming to play on Monday is very different from the one we played last year. And I think that is very much a two way street.

There is an absolutely outstanding look at the performance of the Washington defense and why they were less effective in the second half. There is so much good stuff in here that I don't know what to quote. But I feel I have to because this is just primo stuff. If you want to read one article from Hog Heaven, this is it.

We clearly went into the game with a blitz heavy and often game-plan.  To do this, you have to have CB's on the outside that can play man coverage, because the LB's will be blitzing and can't cover a zone in the middle of the field.

So what changed in the second half? We lost both Josh Wilson and Kevin Barnes, our 2nd and 3rd CB's, to injury, forcing Byron Westbrook and Brandyn Thompson, our 4th and 5th CB's onto the field.  The Cardinals called an excellent game offensively from this point, and there was little we could do about it.  They took advantage of Wilson and Barnes being out and forced Westbrook and Thompson on the field by using 4/5 WR formations.  We didn't want to match up Westbrook and Thompson on the Cards 2nd and 3rd WR's, so we changed to zone coverage.

Glad to see BTB is not the only site doing the scouting for the other team.

A much shorter article talks about DeMarcus Ware Having a Lot of Success Rushing from Right Side. There's no reason to block quote it since that is pretty much the whole idea there. The comment thread is a bit fun to read, but you can make your own call there.

Normally I don't mention the posts that you can call link dumps, but I did notice something in this edition of their Daily Slop (besides the theory going on over there that the whole Tony Romo rib/lung injury story is a hoax):

Next Up For The Cowboys: Video Review Of The Redskins Last Game - Blogging The Boys
The enemy scouts our game vs Cards.

I take page views however I can get them.

But there is not just hard analysis. There is also some plain 'ole smack talk. The title of The Rivalry Means More To Us Then It Does To Dallas (that's how it's spelled over there) pretty much says it all. Just a little basic venom spewed out at us.

Cowboy fans get so sick of their hometown teams losing, that they get fed up and abandon them.
These fans are sick of losing and want a team that's going to win. They see a team that has promise , take the winning shortcut , and hop on said team's bandwagon & there you have it.

I hate the Dallas Cowboys & I hate their fan base. Make no mistake they do think they're better then you. Because they felt entitled to winning they have fell flat on their collective faces due to the realization that besides talent you actually have to work for it in the NFL.

I wonder how he really feels? Oh, I also liked the picture the author selected to illustrate his article: 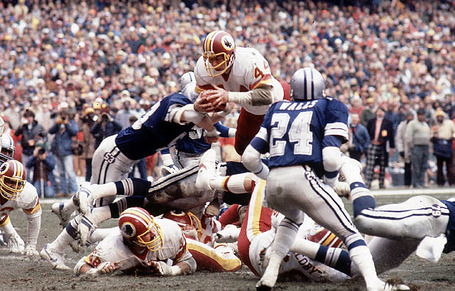