Share All sharing options for: What I'm Wondering About The Cowboys Offensive Line Heading Into Week Four

Going to switch up the Wonders Series this week, and just take an extended trip into a thought that's been rattling in my head this week.

I wonder why I never cared if the Redskins were yelling out the snap count or not?

Well, because it apparently happens all the time in the league, and a team should be able to adjust. Besides, the honest-to-goodness Redskins said they didn't do it in the first place.

The game was at home, and even though Cowboys Stadium never does a great job of keeping quiet while the Cowboys have possession, I still can't fathom a center being fooled as many times as Costa screwed up a snap.

I wouldn't say that fans are glossing over the offensive line problems, but it certainly is sitting as the 'athletic and mobile' elephant in the room. As we pointed out, the Redskins entered the game as the worst run defense team in the league (by advanced metrics) and should have been the cure for the Cowboys running woes. They succeeded in playing their role in this regard, as the Cowboys averaged 4.8 ypc and only had one run for negative yardage. However, just because you beat up on a bad team (or unit, in this case), doesn't mean you're a bully. The Cowboys had a couple big runs that skewed their rushing average a bit.

Meanwhile, the Lions are a much tougher challenge in the run game than the Redskins. Although they rank as the 10th worst run defenders according to Pro Football Focus' cumulative grade metrics, Football Outsiders sees things a bit differently. FO's #2 overall ranked defense is ranked 11th in defensive Run DVOA. DVOA is basically a metric that compares performance on a play by play basis to what the average NFL result is in the given down, distance and game situation.

Passing against Detroit is even more difficult, as their formidable pass rush ranks second in the NFL (FO). Here, PFF agrees; grading the Lions sixth best in pass rush and tops overall in pass coverage.

Unfortunately, the bad snaps aren't the sole concern here (plus Costa consulted Gurode! We're presuming it was after the bad snaps happened). Even with the 4.8 ypc, there were facets of the run game that still didn't work.

As O.C.C. points out here in his game grading post, Doug Free scored the worst of all O Linemen according to Pro Football Focus' metrics. He graded out as a -3.4 for the game (the cutoff for average play is -1.0). For an explanation of PFF's grading system, go here.

Since 'penalties against' are graded separately from run blocking and pass protection, Free actually scored a +0.8 in protection. His run blocking was a disturbing -2.6 and his penalty grade a detrimental -1.6 due to the holds on Orakpo (pass) and Bowen (rush).

Runs to the left side of the field graded a cumulative -4.5, compared to +1.9 to the right side. For those wondering, yes this is Stephen Bowen and Brian Orakpo's side.

Even though Free had the worst game of all lineman, he's not even the worst offender. Bill Nagy again struggled and has now morphed himself into a feeling in the pit of my stomach as the Lions stalk in the reeds. This guy is going to stop Ndamakong Suh? 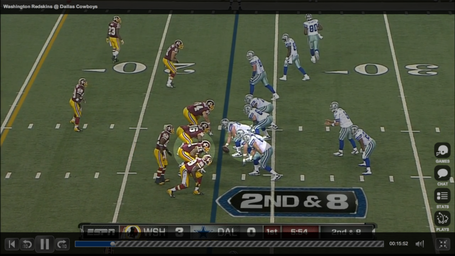 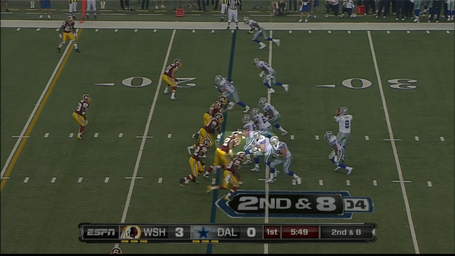 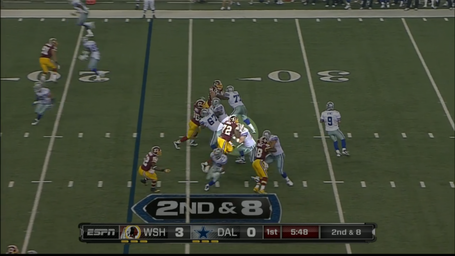 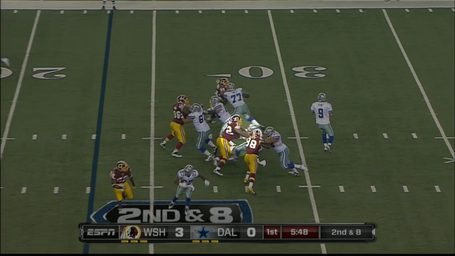 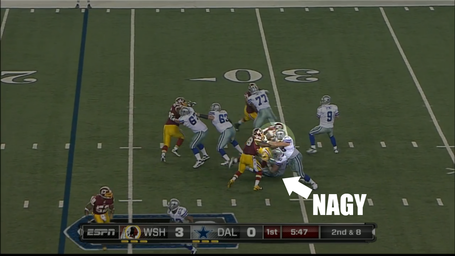 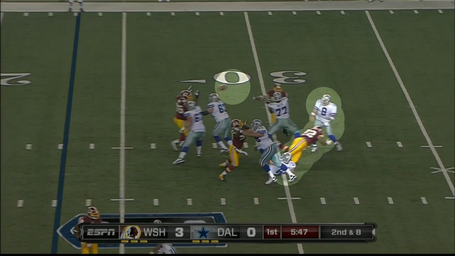 Ouch. Nagy has played in only two games, Week 1 and Week 3. 139 snaps, yet he has accrued the worst cumulative grade of all the Cowboys linemen. Nagy's PFF overall grade is -6.2; +0.1 in pass blocking, +0.5 in screen blocking and an astoundingly bad -7.4 in run blocking. At least he's not committing any penalties like the rest of the line. He's the only line starter yet to be called for an infraction.  Maybe that's the problem; they say there's holding on every play. I guess just not on the ones that include the Cowboys left guard.

One silver lining is that the Cowboys could just still be struggling against 3-4 defenses. It has always been an achilles heel of the Garrett offense. Despite the horrible job of reading the defensive rush, the Cowboys have still accumulated four scoring drives against the Jets, five against the 49ers (plus a missed FG), and six against the Redskins. If Dallas' technique settles down when the gap coverage changes against the 4-3, then there are some signs of hope as 10 of their last 13 opponents go with quattro on the line.

With one less lineman body type on the field than the five in a 3-4, hope exists in the fact that the smaller athletic line can better match up physically and provide each other more help where needed.

Another silver lining is that this entire post of bad line play analysis didn't have to include Tyron Smith. We are keeping an eye on him though, as his game grades have decreased each of the past two weeks.The Cowboys showed some improvement along the line in the win over Washington, but there is still plenty of room to grow. Hopefully the growing kind are the only hiccups they experience on Sunday.