This was a fun game to go back and watch for me, as Jason Garrett and Tony Romo worked together to adjust during the game to a struggling receiving group and a Redskins defense that was playing the very definition of bend but don't break football. They never could get it together in the red zone, something that could be the subject of a future film review.

It's interesting to see how the Cowboys passing offense struggles when the field is shortened and I get the feeling that's why Garrett resorts to the shotgun so much: it opens up the field a bit for Romo and gives him a little more space with which to work. Unfortunately, that hasn't exactly translated to on-field success.

What Garrett was able to do, however, was find a quick answer to the running game woes of the Cowboys. The long runs by Felix Jones in the second half opened up the passing game and gave the Cowboys a big spark in their two 4th quarter drives to finally get the lead at the end of the game. In the passing game, the Cowboys were never able to really get downfield, in part because of a lack of overall speed in contrast to the speed of the Redskins cornerbacks. Romo still found a way to get some big plays, however, mainly due to his incredible ability to recover and make plays when nothing was there.

After the jump, we take a look at how a few breakdowns led to some big plays for the Cowboys and how Garrett and Romo took advantage of a very aggressive Redskins defense.

Before I get into the film breakdowns, I want make a few notes on the offense:

Felix Jones may not be playing at top speed (which cost him at least one long touchdown), but he's still a very savvy running back and may be one of the smartest players on offense. He's developed a great ability to be able to weave his way in traffic between the tackles and he's developed into a weapon in the passing game.

One play really stood out to me that didn't have anything to do with running: On another early snap by Costa, this time on that final drive in the 4th quarter, Jones had the chance to dive after the fumbled snap. Instead, he allowed Romo to go after the ball and he took out a rushing defender -- this avoided a potential disaster if he and Romo tried to get the ball at the same time.

Tyron Smith has suddenly become the best player on the offensive line. He had only one breakdown that I saw and he's become a force in the run and in the passing game. What I want to see is more screens by the Cowboys that take advantage of Smith's athleticism, something I'm surprised I haven't seen more of. 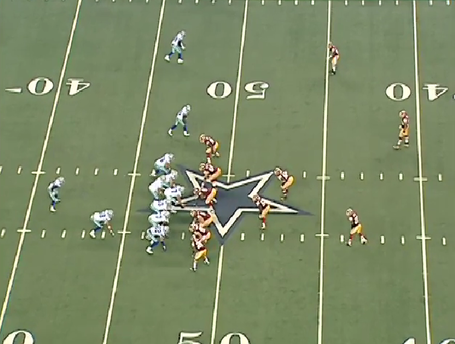 The Cowboys have been given a fresh set of downs after a defensive penalty on third and long, and the Cowboys set up in a traditional run formation, with Witten off the right tackle and Fiammetta in the backfield along with Jones. The Skins are showing an aggressive stance pre-snap and man coverage on the outside receivers. 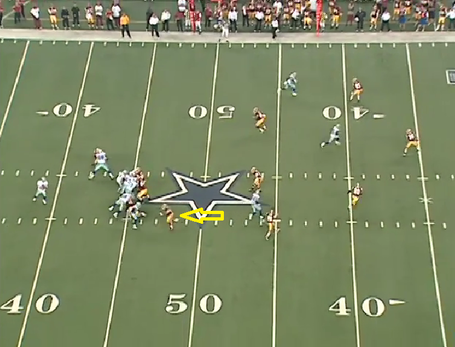 At the snap, the Skins on send four rushers while the linebackers drop off into coverage underneath. You can see on this play that Romo was looking for Bryant or Ogletree deep, with Bryant running a shallow cross and Ogletree deep post across the middle. The Redskins do a great job of bracketing both receivers over the top and underneath, while the linebackers focus on Witten, who is running a crossing route.

As you can see, London Fletcher is a late blitzer, with Felix Jones given the task of delaying his rush. 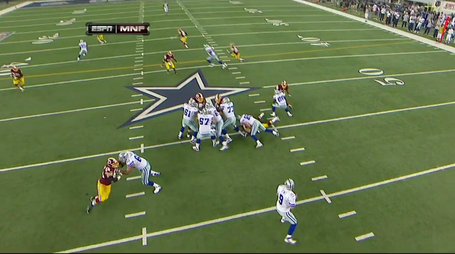 Another view of the field, at the moment when Romo is looking to make the pass downfield. Jones puts a good block on Fletcher, while Witten crosses from right to left. 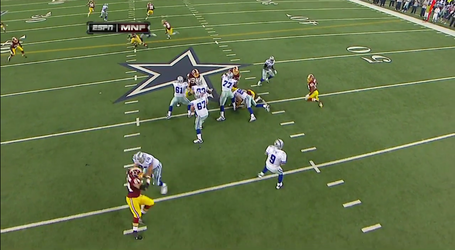 Here's the breakdown: Fletcher gets a good bump by Jones, but doesn't take notice when he's left free to continue the rush. Both underneath linebackers follow Witten across the middle, which Romo sees. The key here is that Romo uses his eyes to keep the defense moving to the left while Jones sneaks into the flat. 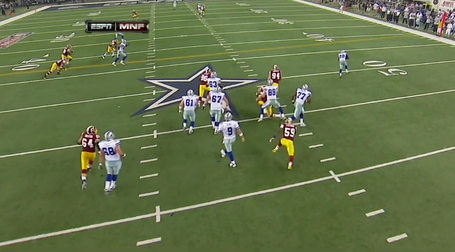 Romo makes a near no-look pass over Fletcher and Jones is off to the races. DeAngelo Hall is able to come all the way across the field to make the tackle, but you can see here how a simple blown coverage underneath has completely opened up the right side of the field. 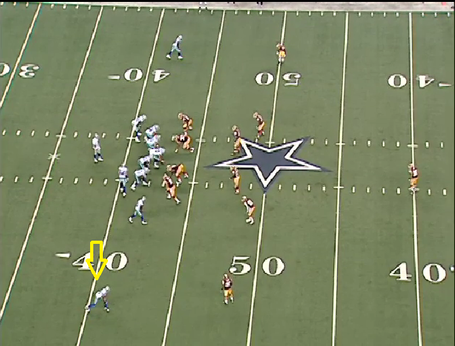 After a Doug Free holding call puts the Cowboys in a 2nd-and-long situation, they line up in an empty backfield, 3 WR formation with Witten set up off the right tackle and Bennett off the left. The Redskins are showing just a four man rush, likely wary of two receiving threats at tight end, and are showing man-coverage on the three receivers with a decent cushion, given the long distance needed for a first down. 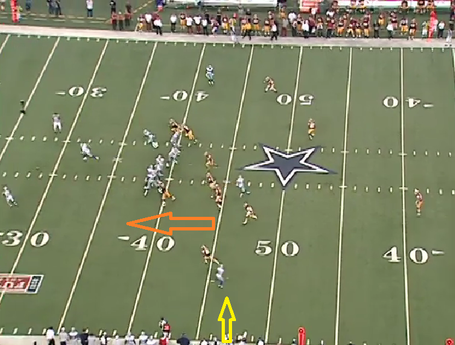 The snap comes early, bouncing off Romo's hip and scooting away from him. All three receivers just quit their routes, but Robinson continues to move upfield. The cornerback covering Robinson, seeing the loose ball, takes off after Romo and leaves Robinson alone. 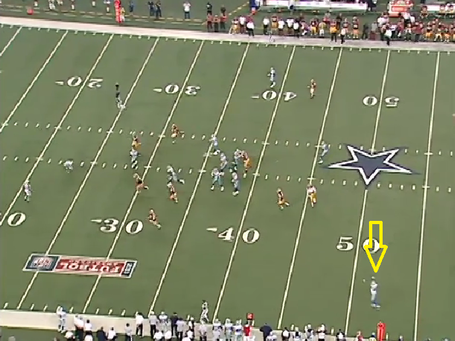 You can see, at the moment Romo picks up the ball, that Robinson has worked himself into an open area of the field while the Redskins chase after the ball. Moving upfield like he has gives Romo space underneath where he can let the ball fly.

It was a great veteran move by Robinson, who knew he needed to get to a space to allow Romo time to make a play with the ball. It should have been the catalyst for a good drive, yet Romo threw an interception on the following play on third down, when the Skins brought an all-out blitz. Remember that.

I'm grouping two (really three) plays together as they are all big running plays out the exact same formation with nearly the exact same result. With the Cowboys unable to open up the running game with straight ahead plays, Garrett pulls out of his bag of tricks a run formation and play we haven't seen much from -- which needs a good fullback to pull off. 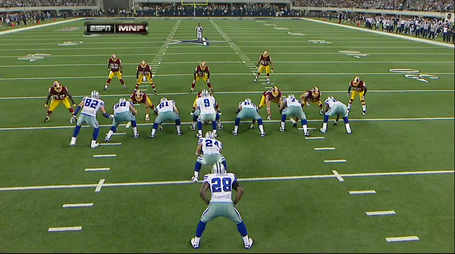 This first play sees the Cowboys in a 22 I-formation, with Fiammetta and Jones lined up right behind Romo. Witten has come in motion from the right slot to just off left tackle, which usually is a sign that the Cowboys are about to run behind Witten to the left. 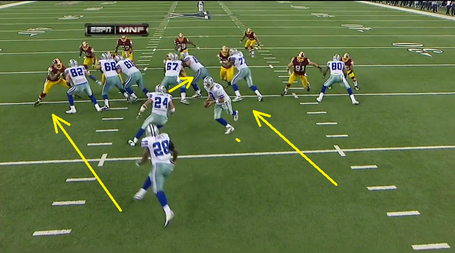 At the snap, the Cowboys formation moves to the left with Smith crashing in from the right tackle. This initial movement gets the Skins moving to the left as well and effectively moves the defensive line out of the way of where this play is designed to go: between Smith and Bennett. You can see here that Fiammetta has already made the first move to the right and it's his job to open up the hole for Bennett. 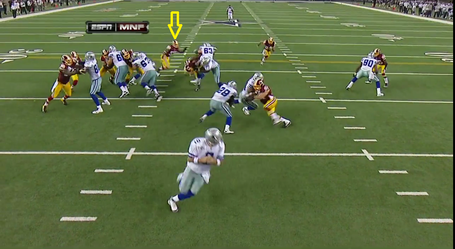 The second key to this big run Jones making an incredible move. You can the Skins linebacker has diagnosed the play and is sliding behind the line to fill the gap. 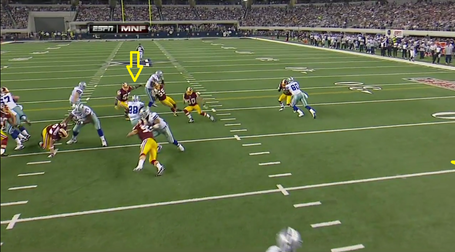 With his momentum carrying him too far, the linebacker is faked out of his shoes as Jones makes his patented one cut back to the left and leaves three Redskins defenders with broken ankles in his wake. After making this move back to the left, you can see a wide open field behind the linebackers. With Jones having to sidestep a few more defenders after breaking free, the cornerbacks for the Redskins had time to cut down the angle and bring down Jones after 27 yards. 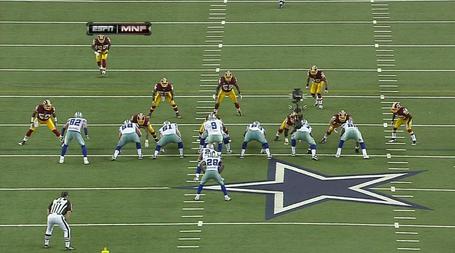 Same exact formation, same exact defense. Witten once again goes in motion from right to left. This was the play that really irked Cowboys fans as well. 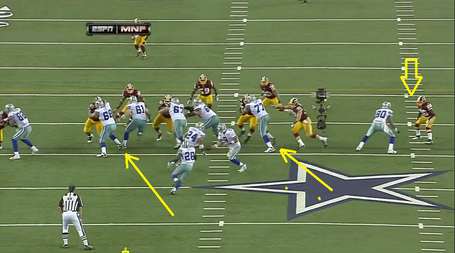 Same as above, with the defense getting moved to the left as Fiammetta makes his break to open up the hole inside of Bennett. 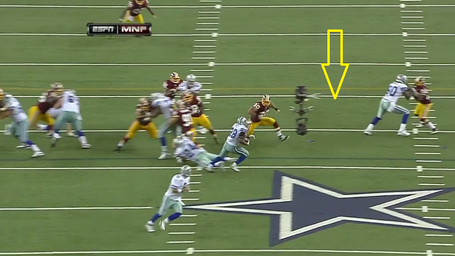 This time, Jones is met by a linebacker who read the play and is bounced outside. Bennett  was supposed to seal the block for an inside run and with Jones breaking outside, he was caught with his hand full of the defender's jersey. This ticky-tack holding penalty nullified a 35 yard run up the sideline. I know fans are all over Bennett for this play but it's very tough for a blocker when the runner changes direction behind him.. 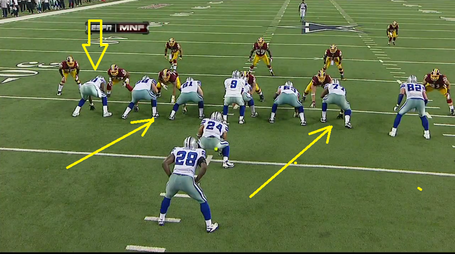 Here's the big run of the game. Same exact formation, yet flipped. Bennett to the left and Witten going in motion from left to right. The offense is going to make the big push to the right this time, with Fiammetta and Jones focusing on the whole on the left. 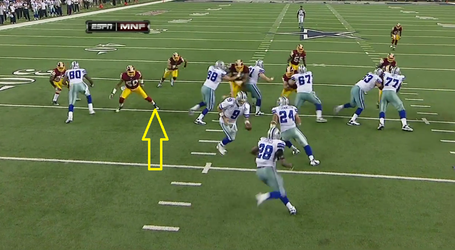 This time, the Skins have diagnosed the play the third time around. Fiammetta has two defenders to take on and it looks like Jones is initially going to go inside of his block. 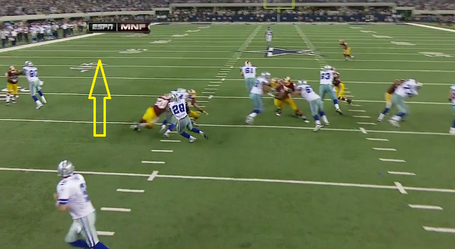 Jones makes that initial cut to the inside, which creates an opportunity for Fiammetta to take out both defenders. Bennett had driven his man so far to the outside that Jones has no choice but to cut his run back up inside. You can see just how wide open the field is, leading to a 40 yard run that set up the game-tying field goal. 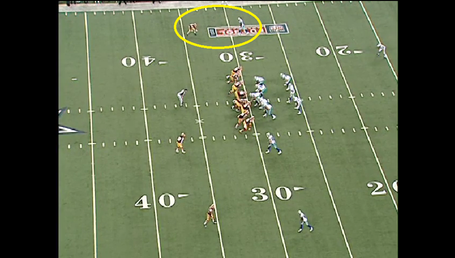 The biggest play of the game. Facing a third and long after yet another bad snap by Costa, the Redskins are showing their third all out blitz in a row. This has been a recurring them throughout the night and with the Cowboys needing 21 yards for a first down, you question whether opening up the field for Romo is smart. The Cowboys are ready for the blitz this time and Romo sees Bryant one-on-one with Hall on the right sideline with zero safety help. 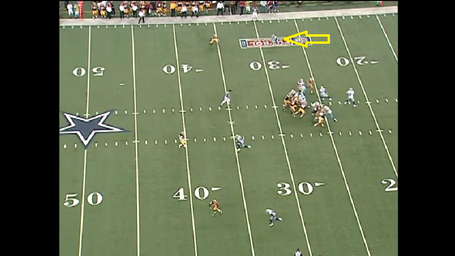 When the ball is snapped, the Skins send eight players on an all out blitz. Choice does a good job of coming across to pick up the free blitzer on the right while Bryant settles down into his "hot" route when he sees the full blitz. Romo has enough time to pause a bit and see how open the field is across the middle. 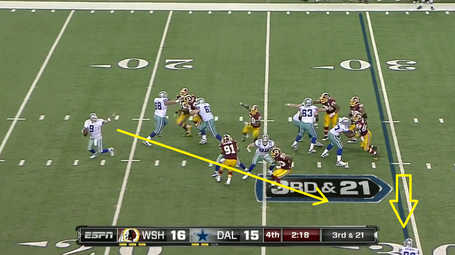 After that initial pause, he peels off and runs out of the pocket and away from the blitz. You can see here where he locks eyes with Bryant(who is standing still at the bottom of the screen) and he tells him to run up field. He moves further away from the pocket and buys time for Bryant, who has now raced past Hall. 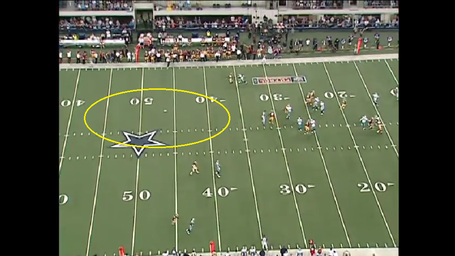 Here, you can see what Romo was looking at. As he throws the ball, there is no one in the middle of the field. He launches the ball to the inside of Bryant and puts it where only his receiver can get it. He said after the game he wanted to put some air under the ball and just let Bryant run underneath it and catch it. It was a brilliant play by the quarterback and a great job by Bryant in reading his quarterback and going and making the biggest play of the game.