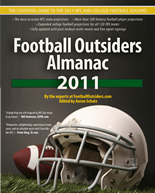 Every year, Football Outsiders produces and excellent Almanac that covers all the NFL teams, and is a wealth of advanced stats information. We love reading their stuff, so after devouring their Cowboys section, we wanted to ask some questions. FO was more than happy to oblige us, so we had the following Q&A exchange with FO writer Mike Tanier that covers all kinds of Cowboys topics. Enjoy!

The 2011 Football Outsiders Almanac is for sale as a PDF document or in print edition.

Blogging The Boys: You famously caused quite a ruckus last year when you predicted a 7.5 win season for the Cowboys, and with the Cowboys closing the season at 6-10, I'd say that's pretty close. How have your other predictions held up?

Football Outsiders: Our Chiefs prediction last year was our best "positive" prediction. We had the Saints coming back to earth, and we predicted a big year for the Patriots at a time when it had gotten fashionable to shovel dirt on them. Not all of the picks were quite that good. The Cowboys pick last year was a tough one. I wrote that chapter and really had to be talked into the numbers we came up with. The great thing about having a statistical system is that the system is blind: it is not always right, but it is always more objective that any individual person can be.

BTB: This year's 7.7 win projection indicates you don't think the changes the Cowboys have implemented will amount to all that much, correct?

FO: They amounted to getting younger and getting rid of guys like Roy Williams, and those things matter. It's hard to make an overwhelmingly positive projection for a team that made so many changes on the offensive line, but those changes had to come at some point or another.

BTB:  Jason Garrett took over the team at the halfway point of the season and led the 1-7 Cowboys to a 5-3 finish. Do your numbers show a significant change in the way the Cowboys played, or was the 5-3 finish just a result of the Cowboys getting back the luck (i.e. in form of turnovers, close games) they had been missing in the first eight games?

FO: A lot of it was getting back that "close game" luck, winning the ones in the second half that they lost in the first half. A little bit was the short-term blip that often happens with a coaching change. There were little things too, like using Marion Barber less and Tashard Choice more, which helped. The Cowboys certainly weren't a better team down the stretch, because they lost too many people to say that.

BTB: You point out in the Almanac that one of the biggest factors for the Cowboys 6-10 record last year was simple, pure luck. More specifically, the absence of it: the Cowboys went 3-8 in games decided by a touchdown or less, including an incredible 0-6 start to the season. Would you assume a regression to the mean for 2011, or in other words, will the Cowboys be luckier this year?

FO: Luckier than last year, probably. Luckier than average, no. You cannot really assume that mathematically. It's called the Gamblers Fallacy. The most logical thing to think is that a team with 8-8 talent is going to go 8-8. I know that's a subtle difference. It's better to concentrate on what the Cowboys can control: getting Garrett established, getting the new offensive line up to speed, and so on.

BTB: The Football Outsider metrics ranked the Cowboys offensive line 14th in run blocking and 8th in pass protection for 2010. The mere suggestion that the O-line might have been average or above average was considered blasphemous among many Cowboys fans and drew derisive sneers last year. And the recent releases of the Cowboys' veteran linemen seem to indicate that the coaches thought similarly. How can you reconcile your numbers with what the infamous ‘eye-test' that suggests were two human turnstiles on the right side of the line?

FO: The numbers show what they show. I never use any stats, even our own, as a substitute for good scouting. At the same time, one or two dramatic plays per game can influence our perceptions of players. The reality is that the Cowboys averaged 4.33 Adjusted Line Yards per rush off right tackle. They had success rushing to that side of the field, and because it is Line Yards, it isn't success that came from some open-field runs by the running backs, but from holes.

BTB: One of the hot-button topics among Cowboys fans is the role Jay Ratliff should be playing on the defense. Do you have any indication that the performance of the D-line would improve if Ratliff were to move to DE.

FO: Not really. He's an excellent lineman at any position.

BTB: Do your metrics provide any indication about what to expect from Dez Bryant and Sean Lee? Both had flashes of brilliance in 2010, but both were also hampered by injuries.

FO: Bryant's DVOA and DYAR were good. One thing I noticed last year is how often they fed him the ball on little "smoke" screens, and I see that 39 percent of his passes were "short" according to our records. There was an effort there to "get him involved," and the Cowboys will have to move past that now because Williams is gone and Bryant will have to be a more traditional second receiver. Lee had that one great game, but I did not see that much of him otherwise.

BTB: You project 810 yards for Dez Bryant for 2011. On a per game basis, that is only marginally better than what Bryant had in 2010. Do you expect the Cowboys to acquire an extra receiver who would push Bryant back into the role of the third receiver Bryant held last year?

FO: We have a pretty sharp increase for Miles Austin. Really, Bryant was the de facto #2 receiver from about Week Four until he got hurt, so his targets and overall stats last year were more like a 2A receiver than a #3. And we project wide receiver-like numbers for Jason Witten again, so it is a matter of how much you carve out for Olgetree and the backs.

BTB: In the 2010 Almanac, you projected Tashard Choice and Orlando Scandrick as number 4 and number 6 on your top prospect list. For what it's worth, Scandrick just signed a 6-year, $28M extension with the Cowboys. Choice though was largely a no-show in 2010, yet this year, he once again makes your list at no. 8. What makes you so confident in Tashard Choice?

FO: He had a pretty strong three-game stretch near the end of last year. He's a back who does a lot of things well. He catches well, he can run direct snap plays, he's sound as an every-down runner. He got caught in a numbers game last year, but with Marion Barber gone, he makes a very good complement to Felix Jones, and a guy who could get a few starts because of Jones' injury history. Apparently, the coaches aren't that high on him because he's not good on special teams, but we think he makes a good running back.

BTB: We haven't even played a regular season game yet, but it's never too early to talk about the draft. Based on your data, what positions should the Cowboys be looking at in the draft with their top two or three picks?

FO: Actually, it is sometimes too early to talk about the draft. No one in an NFL front office projects draft specifics this far ahead. Scouts are still gassing their cars and checking their schedules. Teams project three or four years ahead in terms of salary cap and often in development at positions like quarterback, but there's no way to project even the most preliminary draft board without engaging in goofy speculation.

Thanks to Football Outsiders for sharing their knowledge with us.

The 2011 Football Outsiders Almanac is for sale as a PDF document or in print edition.