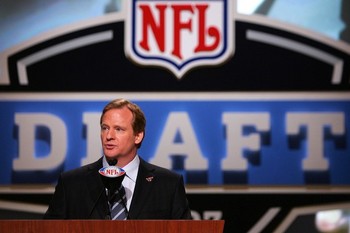 We are exactly three long months away from seeing this happen. The excitement of picking in the top 15 again is too much to take during the long cold months of winter. Maybe the cold air is seeping into my brain and is making me go crazy

It feels like this every year for me. A new year, a new draft......a new emotion takes over me and that emotion is hope.

This is why I love the draft so much. Everything you did wrong goes out the window and all 32 teams are back to step one again. The fresh slate is set forward into motion. After months of research, that hard work finally pays off when your team goes on the clock.

But that is when the emotions run the highest and you find yourself sweating. I get somewhat panicky when the Cowboys go on the clock because I never know what is going to happen.

Will the wheeling and dealing Jerry Jones arise from the ashes of the trades that have burned him and strike a new deal when we go on the clock?

Will Jerry just draft whoever he wants and ignore the entire draft room after months of prepping for this decision?

Will Jerry let months and months of hard work go down the drain in less than twelve minutes?

Will the Cowboys make the right decision? Will they make the wrong decision?

Our first round pick is a hope of joy for me every year, but when that moment finally arrives when we are about to select our next Dallas Cowboy, I go into a state of panic and hysteria.

This was no different for me last year. I knew who I wanted, it was USC offensive tackle Tyron Smith and I had known that for months. But the Cowboys war room was letting the clock run down the entire twelve minutes. Who knows what was going on in that room. Maybe they were exploring trades with other teams and talking about a bunch of prospects.

Whatever happened in that room for almost a full twelve minutes, it made me nail biting nervous. As Roger Goodell announced the pick, I heard the sweet words I had been playing in my head with Goodell's voice over and over again for the past three months. 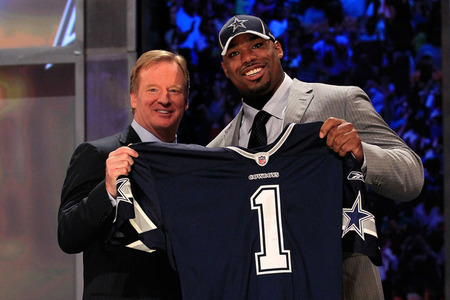 Relief overtakes my emotional state, I then sit back and inhale some fresh air. After months of researching draft prospects and worrying about what would happen, we finally get our guy. We get the guy I have touted since November and it's a great sight to watch Tyron Smith go on to have a great rookie season. Tyron Smith really made me look good and I knew he was going to be the real deal.

But now it's a new draft and everything starts all over again. It will be months of breaking down prospects and analyzing them. I will be looking for the right guy for the Cowboys and their system. This is a crazy time of the year and I am glad that I have tied myself down to one prospect for the Cowboys again this year, like I did with Tyron Smith last year.

Today is January 26th 2012, and I have come to a decision on who I want the Cowboys to draft with their 14th overall pick.

This is what I want to be announed by Roger Goodell on April 26th 2012. 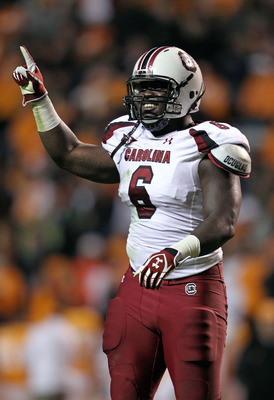 Melvin Ingram has been my guy for the Cowboys 14th overall pick basically since I began to start my draft journey a few weeks ago before the season ended. I just think Ingram is a perfect fit for the Dallas Cowboys and I believe he would jump start this defense back to life.

Personally, I am really proud to have hit on Tyron Smith last year. It's very rare when you become so attached to a guy during the draft process and actually see that player go to the team you love. If this happens two years in a row, I would be so thrilled and overcome with joy. But the odds of that happening really aren't too good.

It's no secret that I want to replace Anthony Spencer. I have written countless comments and articles about my dislike for Spencer in Dallas. He has been a total disappointment in my eyes during his five year career. We have areas of need in other positions, trust me I know this more than any other person. But I believe in Melvin Ingram, I believe that he will be a great football player in the NFL for a long time.

What really sold me on Ingram as my selection for us at 14 so early was his impressive week down in Mobile, Alabama. At the Senior Bowl, Melvin Ingram really had a great all around performance down there. He looked great in the practices and displayed his pass rushing abilities. His burst and athleticism were truly on display this week.

During the individual drills with the coaches, Ingram looked to be a very coach-able player. The RKG people out there will be pleased to here this, Melvin Ingram is the total package as the RKG. Ingram looked very fluid and his footwork was amazing. By going to the Senior Bowl and performing so well, Ingram has solidified himself as a top 15-20 pick in the first round.

I have been watching Ingram perform at a high level in the SEC conference for that last two years at South Carolina. In those last two years, Ingram has been a real productive player for the Gamecocks. Also keep in mind Ingram was installed as a starter in 2010.

Melvin Ingram is also one of the most versatile players I have seen in a long time. I have began to nickname him, Mr. Everything. He played RB, Special Teams, DT, DE, ILB, Nickel LB, and OLB during his career for the Gamecocks. South Carolina knew what they had in Melvin Ingram and unleashed him as a starter in 2010.

You can line Ingram up anywhere on the field and just let him go, because he is going to produce for you. With a creative defense coordinator like Rob Ryan running our defense, I assume that he would love having a guy like Ingram on his team.

Whoever you want to compare Ingram too, that is up to you. But what I do know is that Melvin Ingram would be a perfect fit for us with the 14th pick in the first round. I feel just as confident in his skills as I did with Tyron Smith's last year. It's early to be sending my card in now, but this is how much I like Melvin Ingram.

The Cowboys can go in a multitude of directions this year with their first pick of the draft. David DeCastro would bring a big time guard prospect to the offensive line and we haven't seen that in a long time. Courtney Upshaw would be another suitable replacement for Anthony Spencer on the outside. Michael Brockers would bring a much needed disruptive force to the defensive line. Peter Konz would be an instant starter for us at center and he would be a drastic upgrade to Phil Costa. Janoris Jenkins would bring us our first ballhawk/lockdown cornerback since Deion Sanders.

The Cowboys have options, and options are a great thing to have when you are drafting that high.

But I am sending my card in now folks. I am in love with Melvin Ingram and this man crush has gone facebook/publicly official.

I want the Cowboys to draft Melvin Ingram. I was right last year about Tyron Smith and I hope that I am right again.