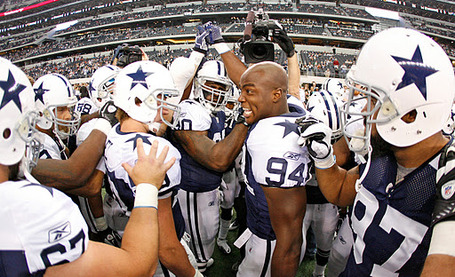 After my last piece, in which I discussed my pains in having a Franchise Quarterback with no rings, I also wrote about The Cowboys having some good skill players with nothing to show for it. Listen in this league it's about Championships, those that have them are consistently in the playoffs, those that don't are left in wonderment.

Well it's been way too long for The Cowboys, and sometimes I wonder why, but to me it's simple. The Cowboys lack some intangibles that are needed for a Championship-Caliber Team. I truly believe you don't have to have a Ray Lewis on your team to win a Super Bowl, but some form of leadership is important. I'm not questioning Tony Romo, Jason Witten, DeMarcus Ware or Sean Lee because they lead by example. In my mind this team needs a few dogs in order to get over this hump.

What is a dog? To me a dog is a player that exudes confidence, and leadership. A dog is a guy that you go to bat for; who always goes in day after day and has one thing in mind, and that is to win a ring. The dog eats, sleeps, and breaths winning. On the other side the dog is someone you need after a tough loss as well. The dog is your glue and he is a guy that given the opportunity he is going to make that key block, or catch, or run, or throw, or stop, sack, interception whatever it may be the dog can handle that. This team has some dogs, but they need more.

The intangibles it takes to get over to the greener pastures start with these dogs I speak of. After the heart-breaking loss The Ravens suffered by missing a potential game tying kick, Ray Lewis spoke to his team afterwards and his speech gave me chills. This guy took up for his Quarterback and team, and I knew after that speech this team would follow this man anywhere because they trust him with their lives. That is what I want for our Cowboys.

I want to see players that will claw their way to a victory. I saw flashes of it this year with some close games in which Romo would set up Bailey for the win. I want more. In this Draft, in this Free Agency, we must find men that can be dogs. We need Jason Garrett back at his 2007 Form when if he was ahead; he was going to poor the points on. Love him or Hate him but Belichick does that to a T, and the same could be said for Sean Payton. Who cares about sportsmanship, if they can't stop you they deserve to be embarrassed.

This year hurt me more than last year in terms of the NFL Season for our Cowboys. Last year I lived in New York City, and I knew how hard it was when they lost because I would hear it all around. However this year, Romo was out of his mind good, and Sean Lee really cemented himself, Ware was his consistent self as well as Ratliff, Witten, and others. We saw Dez make some spectacular catches, DeMarco Murray emerged, Laurent Robinson became a true gem, Tyron Smith proved his worth and that's what hurt the most. This team had times where I really thought it might happen, but the same inconsistencies popped up.

In this Offseason, Jason Garrett and the rest of the Coaching Staff need to force this team to the next level. This Offseason is too crucial to waste. I know people will say this team is in rebuilding mode. That is idiotic to think because with the "Stars" that are on this team you should be in contention. The goal for every team during the season is win a ring. If you buy into the "We just want to put some wins together and hopefully be there at the end of the year" then you are doing exactly what The Coaches want you to do. Ask Rob Ryan, he wants to win Championships, if you don't then get out of Football.

Luckily there are some dogs hitting the free agent market this year, as well as prospects in the draft. I suggest we get a few, and I guarantee you that if we can put together some solid acquisitions then the dogs that are currently on this team will start to bite a "helluva" lot more than they bark. Jerry said when he took over the ownership of this team "There is no substitute for winning, we will win, winning is the name of the game." This team needs that winner's mentality to hit and they need to run with it.

I hope as I am writing this now that some of our players are getting ready to watch the Super Bowl and are realizing this is what it is all about. That the feeling of watching your rival getting the chance; eats you alive inside. I hope all they can think about is in March when 2012 begins; I hope that football is the only thing on their minds. This team needs to use this Offseason to find chemistry, and work as a single unit to accomplish the ultimate goal: A 6th Lombardi Trophy for The Dallas Cowboy's History Books.

Open ended Question: How can The Cowboys make significant strides this Offseason?