Cowboys Film Session: The Controversial Play That Sparked A Win In Philly

Tony Romo hooked up with Dez Bryant for a 30-yard touchdown with seconds remaining in the third quarter. This play may not have won the game for the Dallas Cowboys, but it was the beginning of a 28-point explosion that buried the Philadelphia Eagles.

Share All sharing options for: Cowboys Film Session: The Controversial Play That Sparked A Win In Philly

It feels good to watch the Dallas Cowboys defeat a divisional opponent on the road, but it feels even better to basically end the Eagles season in a 38-23 win. It was a win that the Cowboys needed to have, giving the Cowboys some much needed life. The New York Giants have lost two games in a row. If the Cowboys beat the Cleveland Browns at home this Sunday, then the Cowboys will be just one game out of first place.

Perhaps the biggest play of the Eagles' game came on Tony Romo's 30-yard touchdown strike to Dez Bryant. It was a controversial play, but it gave the Cowboys a much needed spark. 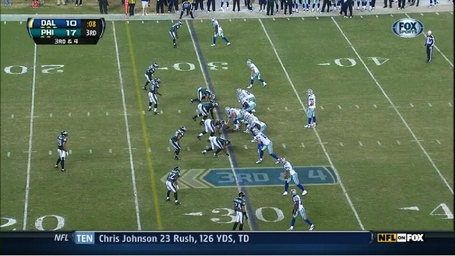 Once again, the Cowboys were stale on offense. On their opening drive, Felix Jones capitalized and scored on a 11-yard touchdown pass from Tony Romo. After that play, the Cowboys struggled to move the ball against the Eagles. After finally sustaining a decent drive, the Cowboys faced a 3rd and 4 with just a few seconds left on the clock in the third quarter. 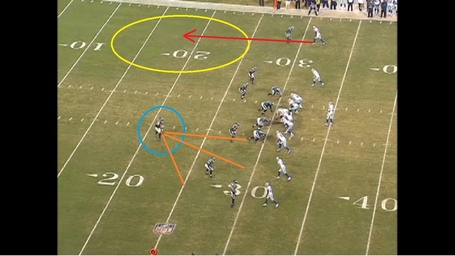 Jason Garrett empties out the backfield and goes with four wide receivers and one tight end. Kevin Ogletree and Dez Bryant are split out wide, while Miles Austin and Cole Beasley man the slot. Jason Witten is split out on the left side of Tyron Smith.

The most interesting part of this play is that the Eagles simply do not show any concern for the deep ball. Dez Bryant may have had his struggles this season, but he is always a huge threat for the deep play. Dez receives single coverage against Dominique Rodgers-Cromartie.

Safety Nate Allen is the only safety lined up anywhere remotely deep, but he is still playing closer to the line of scrimmage where he can take on either Ogletree, Austin or Witten. 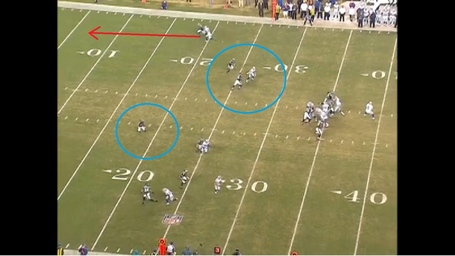 At the snap, Dez runs a fly route. With no safety deep, Dez has a clear shot to the end zone. Cole Beasley gets some respect from the Eagles due to his speed. Kurt Coleman and DeMeco Ryans play their zone and double Beasley up in coverage.

Nate Allen roams in his area and makes sure that Witten is neutralized. The Eagles never had a chance to prevent the deep ball to Bryant, and Romo knows that. 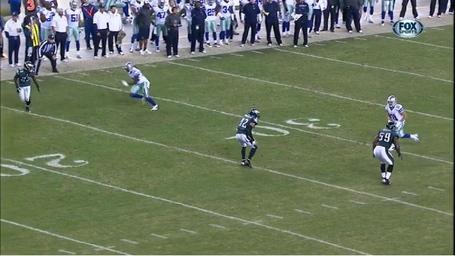 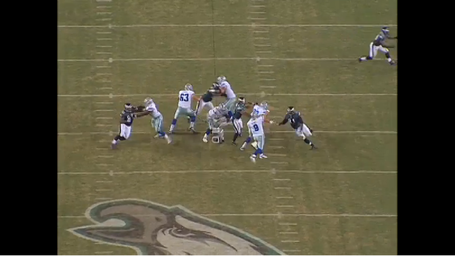 Jason Babin and Fletcher Cox run a stunt. The stunt is run to perfection and beats both Mackenzy Bernadeau and Doug Free, which is no surprise since those two have had trouble with those type of pass rushes all season long. Romo eyes in on Dez the entire time and makes a beautiful throw before Cox can get to him. 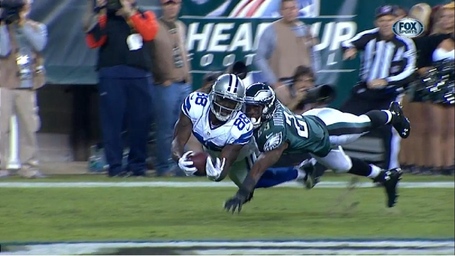 This was a controversial call because there is some question to whether Dez had full control of the football. Dez makes an incredible catch with Rodgers-Cromartie all over his back. 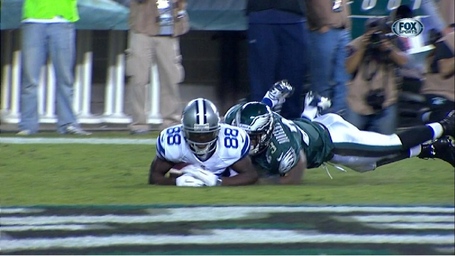 Regardless of whether Dez had full control, this play got the Cowboys going in this game. In the fourth quarter, Dallas scored 21 points and put the Eagles away for good. Dez Bryant had one of the most memorable plays in recent memory get called back because he was just inches out of bounds. In a season full of disappointment, it felt really good to see Bryant and the Cowboys catch a break.