Join us in our BTB pick 6 football game for a chance to show up some of the frontpage writers and earn a spot on the BTB top ten leaderboard. And remember to get your Week 12 picks in before 1:00 pm ET on Thanksgiving! 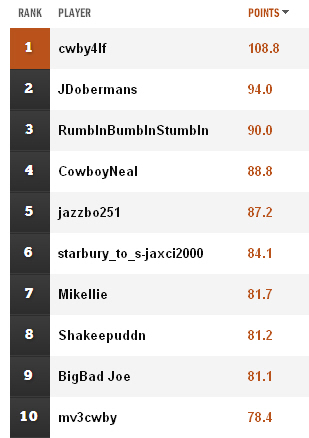 Another week is in the books for our BTB Pick 6 Football contest. 84 BTB members participated for a chance to read their name on the BTB Top Ten leaderboard on the right.

If you haven't signed up yet, you should. The game is easy and fun: You pick six different players (QB, RB, WR, TE, K, Wildcard) with a capped fantasy budget. You can pick anyone you want as long as you stay within your budget. There is no simpler fantasy football game around, and everybody starts from scratch every week. You can enter and leave at any time, no obligations whatsoever.

This week's winner, cwby4lf, ran away with the victory by including Carson Palmer, Dez Bryant and Andre Johnson on his team. That team was so good, it finished second overall in the entire SB Nation network. cwby4lf has been a member of this blog for almost exactly four years so this win doubles nicely as a 4-year anniversary present.

We had three frontpage writers participate in the game last week. "The Grizz Line" denotes the position of the lowest ranked writer on the leaderboard, and this week Dave Halprin drew the line at no. 46. Yours truly only came in marginally better at no. 35 while our fantasy master extraordinaire KD Drummond finished in the 20th spot.

You may not make it onto the top ten leaderboard when you sign up, but there's a good chance you'll do better than at least one of us front-pagers in this contest, so submit your picks today.

Join the contest and enter your picks before Week 12 kicks off at 1:00 pm ET in Detroit for a chance to see your name on the BTB leaderboard. Click on the banner below and you'll be taken directly to the Pick 6 welcome page, where you can select the players to fit your fantasy budget.

Here are my picks for Week 12: