It's almost Turkey Day, which always means time for the Dallas Cowboys to play a game. This time around we get a hated rival for the holiday festivities - the Washington Redskins.

To get a better read on what is going on with the Washington Redskins, we turn to Hogs Haven, the SB Nation blog for the 'Skins. I asked 5 questions about the game, and got five answers. 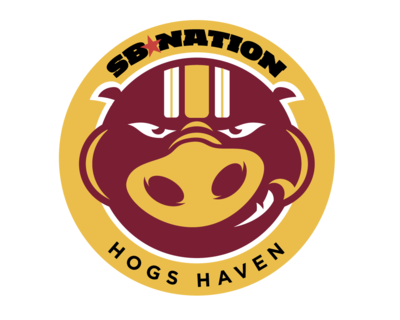 Blogging The Boys: We all know RG3 can run, but how has he progressed in the passing game? What are some of the best strategies that have been employed to slow him down?

Hogs Haven: RGIII's passing game has progressed nicely, and frankly, I feel like it's always been there. The Redskins just don't have the personnel to compliment it. Pierre Garcon got injured the first quarter of the season and basically has not played since. That's a huge loss. Santana Moss has been reliable, but the other WRs, Josh Morgan, Leonard Hankerson, Aldrick Robinson have all been benched at one time or another. They're decent, but inconsistent, which is not ideal for rookie QBs. The Oline is not good enough to let RGIII do the traditional 5 and 7 step drops, so the read option has served nicely. For the stat geeks, Mike Tanier did a post where RGIII's accuracy between 11 and 20 yards is 71.9% (rest of league is 55.1%).

I don't have much advice on slowing him down. His worst statistical game was vs the Steelers and the Redskins WRs dropped 10 balls that game. RGIII shredded the Eagles D with his feet converting two key 3rd and longs with outside runs because they let him get out of the pocket. Always, always funnel him inside and force him to get down or take a hit.

BTB: You guys lost a couple of important pieces on defense early on. What is the state of the defense now, heading into the Cowboys game?

HH: It's a mess. Losing Brandon Meriweather in the pre-season was a big loss, which we saw when he finally played last week and made a big impact (both of his backup SSs have been benched before). With Meriweather lost for the season, the Redskins will fall back to Dejon Gomes, the 2nd year man out of Nebraska who was benched earlier this season for poor coverage. The DLine has been good against the run, but without Orakpo, the Redskins are ranked 23rd in sacks. Teams with good OLines have shredded the Redskins secondary since the lack of pass rush has given QBs too much time.

BTB: Give us the 411 on the current injury situation in Washington and how could it affect the game.

HH: London Fletcher sprained his ankle and was in a walking boot on Monday. It's hard to imagine he'll sit out this week, but Redskins fans probably wouldn't be against him resting. It's clear our defensive captain's age has caught up to him as he's much slower in coverage. Lorenzo Alexander and Keenan Robinson have been filling in. On the offensive side, Pierre Garcon has a mystery toe injury that has him playing limited. He is not much of a threat these days, sadly. I wish they'd shut him down for the year.

BTB: Alfred Morris has overcome his low draft position to be a real find for the Redskins. What's his game like? How do the Redskins utilize him?

HH: The best way to describe Alfred Morris' running style is this pre-season clip of when he trucked Lance Briggs. No one does that to Briggs. There's at least one highlight a game where Morris is dragging multiple defenders. He said his goal with every carry is not to get tackled by one defender only. He doesn't have breakaway speed, but he does a lot of damage in chunks.

BTB: What strategy on offense and defense do you see the Redskins using to come away with a victory Thursday?

HH: Offense: I see the Redskins continuing to do what they have been all year. RGIII runs the read option where he either hands it off to Morris or doesn't. His play action fakes are outstanding enough where you will have trouble following the ball on TV once or twice. With LBs frozen, that leaves over the middle passing plays to Logan Paulsen and Moss. The bootlegs and misdirections then get thrown in for long passes where Hankerson and Aldrick Robinson's speed can be utilized.

Defense: Haslett has always been an aggressive play caller. With Dallas having so much talent at the WR positions, it'd be crazy to think the Redskins don't play tight, jam coverage and attack the OLine as much as possible. The Redskins have had trouble covering TEs over the middle all year, so if you don't have Witten on your fantasy team, trade for him and start him.

Thanks Kevin and Hogs Haven for dropping some knowledge.