Even though our division rivals, the Washington Redskins, put the beat down on our beloved Dallas Cowboys, Dez Bryant had another monster game. Let's take a closer look at his two touchdowns on Thanksgiving.

Robert Griffin III strolled into Cowboys Stadium and had himself one hell of a homecoming game. The Washington Redskins beat the Dallas Cowboys at home on Thanksgiving and they made it clear that they aren't out of the NFC East race just yet. It was a bitter way to end a great day for many Cowboys' fans who love to watch their favorite team after a great meal.

The Dallas offense did pretty much nothing in the first half. Actually, the defense also did their fair share in allowing the Redskins to coast to a 28-3 lead at halftime. Had the Cowboys opened up the offense and tested a suspect Washington secondary, who knows how this game turns out.

Regardless of the outcome, there was one player who continues to grow into a very dominant player. Dez Bryant has had an up and down season, but he is such a talented player who can dominate games. The mistakes are starting to disappear from his game. He did have a costly fumble, but that was just a great play by the cornerback. When you can get your helmet square on the ball and make a violent hit, then you will force that football to come popping out.

Dez has kept the Cowboys in the game for the past two weeks now. If not for a great play by Madieu Williams, we would be breaking down three touchdowns by Bryant. Let's take a closer look at his two touchdowns and analyze how he was able to score. 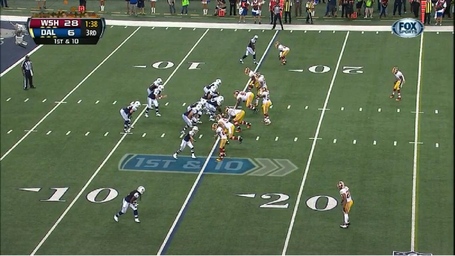 Up until this play, the Cowboys have struggled mightily on offense. Operating out of a three wide receiver set, Romo also has Felix Jones and Jason Witten in the backfield. Before the snap, Witten will motion out to the right of Romo. 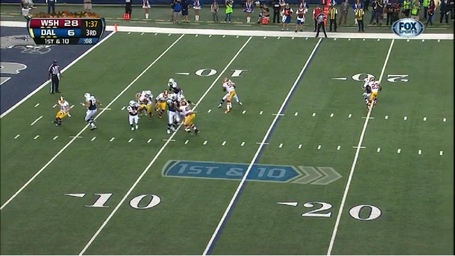 While Jeremy Parnell had a pretty good game, he gets beaten badly on this play. There is also some confusion by Nate Livings on which Redskin to pickup on the stunt blitz. Due to the pressure, Romo is forced to scramble out of the pocket and run to his right. 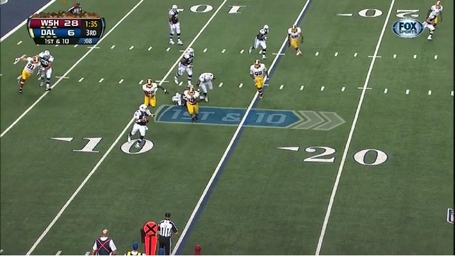 Mario Addison and Chris Baker are in hot pursuit of Romo, but Tony easily gets away from them and leads Dez into the open field. Dez receives single coverage from Josh Wilson, but he beats him easily and drags across the field in order to make the throw easier for Romo. 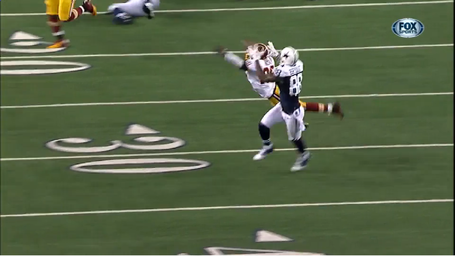 This is a dangerous throw by Romo, but he puts it just above the stretching Wilson and into Bryant's hands. If this throw is off, then it's probably a deflection or another terrible interception. Wilson gambles and makes a diving attempt to make a play on the football, but it's just a great throw. 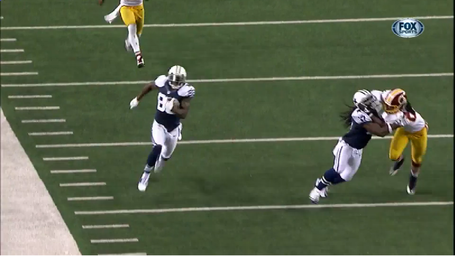 Notice that Dwayne Harris is fighting down the field and makes a great block on Dejon Gomes. Dez is too fast and has a lot of open room. This 85-yard touchdown was the spark that the Cowboys needed. It's just unfortunate that they couldn't get this going earlier. 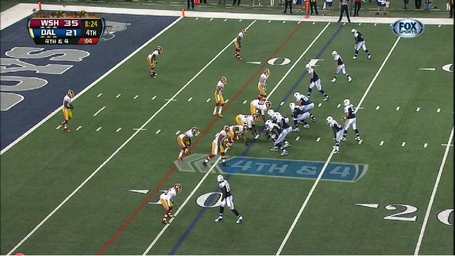 On this play, the Cowboys need to pick up the first down. If they don't, then this game is over with and they will turn the ball over on downs. Troy Aikman said during the broadcast that he liked the decision to go for it because a touchdown makes this a one-possession game. The Cowboys overload the right side with Jason Witten, Cole Beasley and Dwayne Harris. Dez receives Josh Wilson in man-to-man coverage on the bottom of the screen. 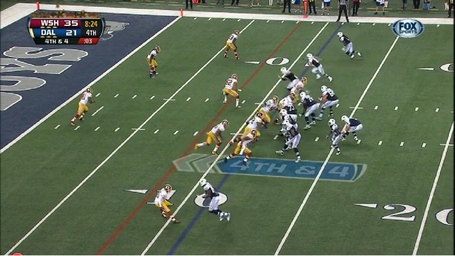 Mackenzy Bernadeau has done a pretty good job filling in at center, but on this play he picks the worst possible time for a mishap snapping the football. The snap is nearly on the ground and Romo has to make a great play just to pick the football up. 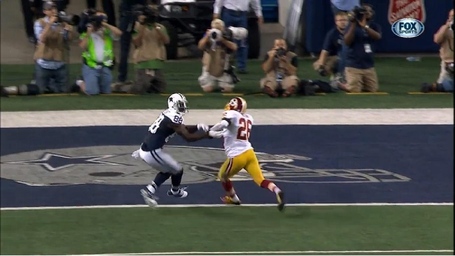 Dez hesitates like he is going inside, but instead he runs a move to the pylon in the front corner of the end zone. When there is just the wide receiver and the cornerback, I want to see the refs let them play. There was some contact on both sides here, but nothing is called and I think that is just great football. Dez runs a fantastic route here and beats Wilson to the corner pylon. 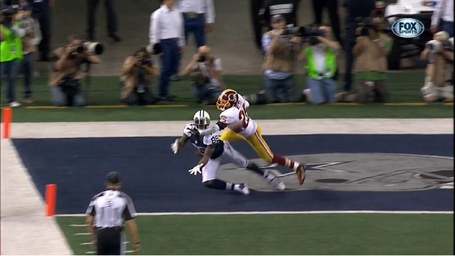 It's amazing that Romo even got this throw off. Not only does he pick up a bad snap, he makes a perfect back-shoulder throw to the only spot that Bryant can get the ball. Wilson recovers and is draped over the back of Bryant, but the Romo throw is perfectly placed where only his wide receiver can make a play on the football. 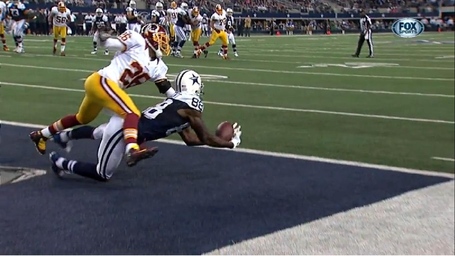 Dez adjusts to the ball and secures the touchdown catch. This was a huge play in the game because it gave the Cowboys life and cut the game to a single-possession. The lead has been cut to just seven points and if the Cowboys get a stop, then they can make a run at making a great comeback. Unfortunately, the defense didn't do much yesterday and couldn't stop Robert Griffin III and Alfred Morris when they needed to.

This post is sponsored by Jack in the Box.