Seven teams in the NFC are locked in a battle for the two wildcard spots at the moment. We look at where each of those teams ranks in our summary of power rankings heading into week thirteen.

If the season were to end today, the Cowboys would not make the playoffs. And with seven teams currently in a race for the two wildcard spots, the chances of Dallas playing in the postseason are slim at best.

But there still are five games left to play, and a lot can change in those remaining games. So instead of looking at the NFC East, where the Giants hold a two-game lead and the Eagles are irrelevant, today we'll take a look at the playoff picture via the various power rankings out there to understand which NFC playoff contenders are the flavor of the week, and which aren't.

The Falcons, 49ers, Bears and Giants currently lead their divisions, so we'll leave them out of the picture for now. Instead, we'll look at the seven teams who have won between five and seven games. On to this week's power rankings.

WEII.com: 17th (13th). "In two full seasons, Jason Garrett has a 13-14 record. Dallas is an average team with above average talent. Don’t get me wrong, this team has endured a boatload of injuries. However, poor coaching and undisciplined play has made a bigger impact on the Cowboys win/loss record."

Drafttek.com: 18th (15th). "Remember when the Thanksgiving Day game was a built-in advantage for da 'Boys? Short week at home, semi-bye late in the season . . . to hell with that, remember when professional football was played in Dallas? With 6 losses, it's time to analyze some Big Uglies!""

CBSsports.com: 18th (16th). "Say goodnight to a division title and those playoffs hopes are looking dim again. They just can't get over the hump."

SB Nation: 18th (16th): "Cowboys vs. Eagles is another opportunity for an NFL head coach to be fired at halftime."

Fox Sports: 18th (17th). "Ladies and gentlemen, please keep your hands and feet inside the car for the duration of the roller-coaster ride."

ESPN: 19th (16th). "Four starting defensive players are now on injured reserve as the Cowboys continue to muddle through an up-and-down season. (Graziano)"

reddit.com: 19th (16th). "On what is normally a day of pride for Cowboy’s nation, the Redskins marched into Cowboy’s Stadium putting on a spectacular air show featuring their shiny new Quarterback. Cowboy Fans watched their playoff hopes effectively shut accompanied by a chorus of mocking laughter from holiday celebrating family and friends. For many, Jerry Jones’ culture of mediocrity has robbed them of the joy of football, replacing it with the burden of embarrassment. One must wonder how long it will take for that burden to reflect in Jerry’s pocketbook."

Just for fun, this week we're adding a little visual razzmatazz. Every week, BeatGraphs.com produces some of the niftiest charts around, based on the premise that if team A beats team B (A→B), and B beats team C (B→C) then A is better than C. BeatGraphs provide rankings that cannot be defeated by a chain of A beat B beat C scenarios. In the end, when all ambiguity is removed, if A has beaten B, A will be ranked above B. Here's their latest offering: 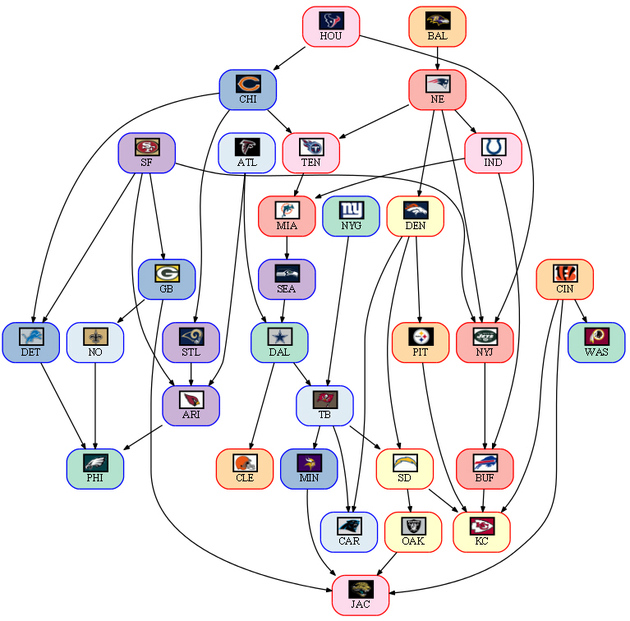 Oddsshark: 13th (12th). Oddsshark use a multitude of stats to establish an offensive and defensive power ranking, which they then adjust for the strength of schedule.

Teamrankings.com: 18th (16th). This site measures the relative strength of all teams using team performance, home/away status, margin of victory and other factors.

WhatIFsports: 16th (24th). These guys simulate every possible match-up in the NFL 100 times, and use the winning percentages from those nearly 50,000 games to evaluate every team, with updated rosters and depth charts.

Below is how the seven teams currently competing for the NFC wildcard spots fared in this week's power rankings.