BTB Fantasy Football - This Is Where It's At!

This week we've got a three-time winner, a front page writer and a handful of other recognizable names in the Top Ten of our weekly BTB fantasy contest. Read on and make sure you submit your picks this week. No excuses!

Share All sharing options for: BTB Fantasy Football - This Is Where It's At! 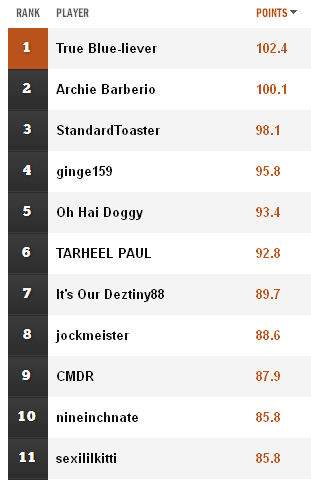 Another week is in the books for our BTB Pick 6 Football contest, and we have our first three-peat: This week's winner, True Blue-liever, already took the BTB fantasy crown in weeks seven and nine and now has won the Week 12 contest as well. In this week's contest True built a team featuring Tony Romo, Dez Bryant and Trent Richardson. That team was good enough to finish fifth best overall in the entire SB Nation network.

60 BTB members took part in the contest this week. In previous weeks, it had been fairly easy for the participants to beat the participating frontpage writers, and about 20-30 players routinely beat all frontpagers. Not so this week. A look at the leaderboard on the right shows a familiar face in second place. Our own Archie Barberio came in a close second for the first Top Ten finish by a frontpager.

Dave Halprin finished a respectable 19th, I came in at a middling 35th while KD Drummond took up his customary position at the end of the the rankings, finishing 57th out of 60.

If you haven't signed up for the Pick 6 game yet, you really should. The game is fun and it couldn't be simpler: You pick six different players (QB, RB, WR, TE, K, Wildcard) with a capped fantasy budget. You can pick anyone you want as long as you stay within your budget. Everybody starts from scratch each week and you can enter and leave at any time, no obligations whatsoever.

You may not make it onto the top ten leaderboard when you sign up, but there's a good chance you'll do better than at least one of us front-pagers in this contest, so submit your picks today. Click on the banner below and you'll be taken directly to the Pick 6 welcome page, where you can select the players to fit your fantasy budget. Deadline is by kickoff on Thursday night.

Here are my picks for Week 13:

Use the comments below to trash my picks (or talk about KDs disappointing results) and to discuss your Week 13 strategies (the most important of which is to remember to actually make your picks).