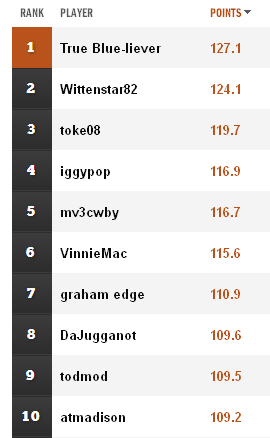 You know all about the challenge: You pick six different players (QB, RB, WR, TE, K, Wildcard) with a capped fantasy budget. You can pick anyone you want as long as you stay within your budget. There is no simpler fantasy football game around, and everybody starts from scratch every week. You can enter and leave at any time for a chance to see your name in the bright lights here on BTB.

Week 10 saw the first repeat winner of the season: Our Week 7 winner True Blue-liever came through again with a season-high score of 127.1 points. This week's breakout player was Tampa Bay's Doug Martin (51.2 points) and every single one of the top 16 participants this week had Martin on their team.

True Blue-liever ranked high enough to place third overall among the participants from all 32 SB Nation NFL blogs, and represented us well. The top five BTB players all finished within the SB Nation Top 25, the best result of any blog in our network. Cool stuff.

Join the contest and enter your picks before Week 9 kicks off on Thursday night for a chance to see your name on the BTB leaderboard. Click on the banner below and you'll be taken directly to the Pick 6 welcome page, where you can select the players to fit your fantasy budget.

The top 16 all had Doug Martin on their team. I didn't, and finished 17th. My personal best of 95.1 points would have been good enough for first place last week, but that's just how this goes. Bummer. Here are my picks for Week 10:

You can do better than that, can't you? Click here to get your team going. Don't be a slacker, do it right now!