The Dallas Cowboys failed to capitalize on the opportunities given to them against the Atlanta Falcons. Let's take a closer look at a few plays that the Cowboys didn't capitalize on.

The Dallas Cowboys had a very good opportunity to get their season back on the right track against the Atlanta Falcons. Even though the Cowboys were coming off a gut-wrenching loss to the New York Giants, the Cowboys matched up with the Falcons pretty well. Yes, the Falcons were an undefeated team, but they have their flaws and are a very beatable team.

When you play teams who are undefeated, you need things to go your way. Unfortunately for the Cowboys, this was another game that just didn't go their way. They failed to capitalize on the opportunities given to them. Good teams will take an opportunity that is given to them and they will capitalize on it.

For the most part we can blame Orlando Scandrick and Danny McCray for their failures on defense, but overall the defense did their part. Even though they allowed Julio Jones, Roddy White and Michael Turner to have 100-yard games, the defense managed to hold the Falcons to just 19 points.

I decided to focus on a special teams play and two offensive plays that had an outcome on the Cowboys losing to the Falcons and falling to 3-5. 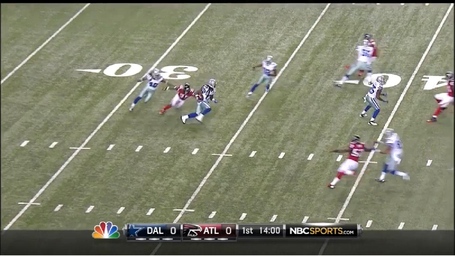 The Falcons start the game off with a quick three-and-out. This was a key opportunity for the Cowboys to get some points on the board and take the early lead. Dez Bryant has been demoted as a punt returner because he takes too many chances and doesn't secure the football.

Dwayne Harris isn't the same type of dynamic athlete that Bryant is, but he does have some "wiggle" to his game and can be a reliable punt returner. Harris takes the punt and immediately makes the first Falcon miss. When a punt returner makes the first guy miss, usually good things will follow. 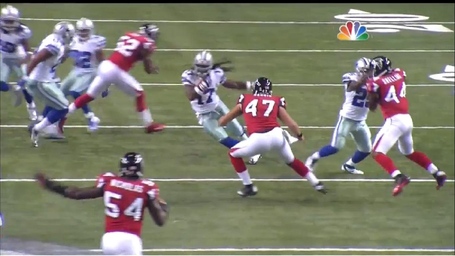 Harris doesn't bounce this return outside and decided to go right through the heart of the Falcons up the middle of the field. He makes a quick cutback and avoids more Falcons on his way to a big play. 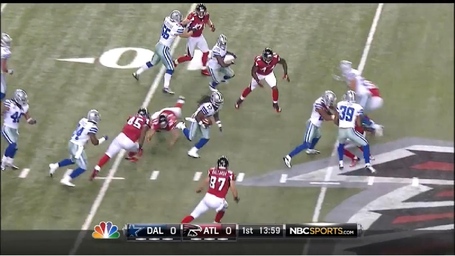 After his juke, Harris avoids a shoestring tackle and heads up field. Notice that #39 Brandon Carr is earning his $50 million on this play and makes a great block. 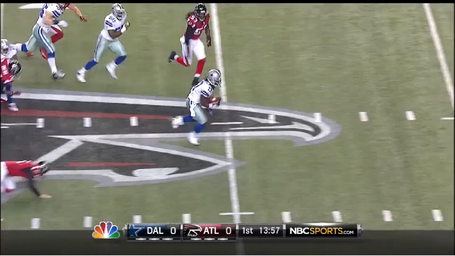 Harris makes a beautiful spin move on the punter and has nothing but open room waiting for him. If Harris can outrun veteran linebacker Mike Peterson, then he puts the Cowboys up 6-0. 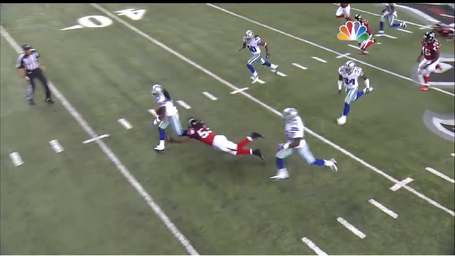 Let's give 14-year veteran Mike Peterson some credit here for hustling back and making the shoestring tackle on Harris. Harris should probably have ran more to the sideline when he got into the open field. I really can't sit here and say that Harris made a bad play or mistake, but he didn't fully capitalize on his opportunity. This didn't cost the Cowboys the game, but it did cost them an early seven point lead and a whole lot of momentum in a football game that they desperately needed to win. 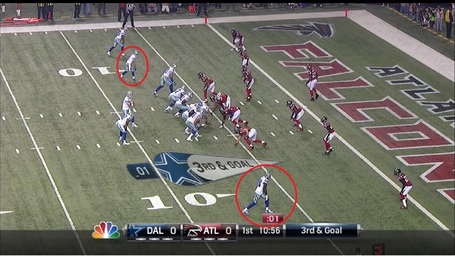 After the 37-yard return by Harris, the Cowboys are given a great opportunity down in the red zone. After a couple of plays, the Cowboys find themselves in a third-and-goal situation. Cole Beasley finally began to see some playing time in this game and he is lined up in the slot.

On the bottom of the screen, Dez Bryant draws Asante Samuel in coverage. We will get back to Bryant later on in this play. 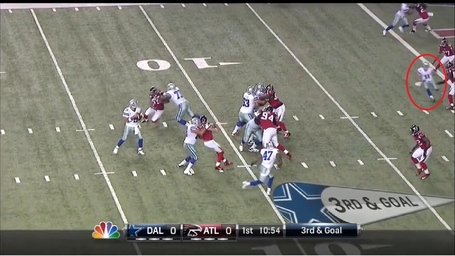 Romo has his eyes on the left side of the field. Beasley runs an inside route to the end zone, but the Falcons have this play bottled up from the beginning. Zone defense is perfect for red zone situations because there is a short field to work with. Throwing the ball with success becomes even more difficult when teams run zone defense down in the red zone. 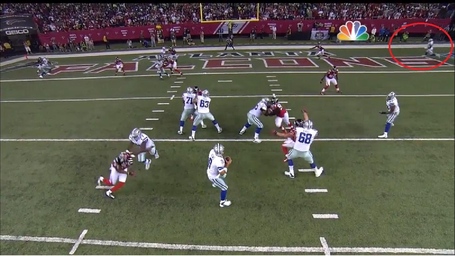 The Falcons are running a great defense for this play, but Romo never looks to the right side of the field. Bryant easily beats Samuel and finds a hole in the zone defense. All Romo has to do is see that Bryant is open. If he notices that, then he can drop the football in over the linebacker. Romo has done this countless times before. 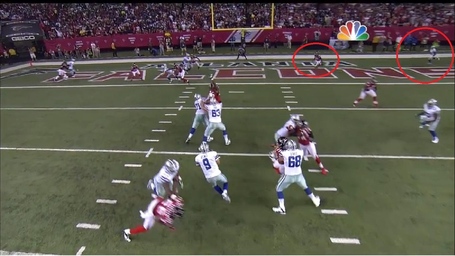 Romo never looks for Bryant and decides to take off on his legs. This is a shame because this was a touchdown, hopefully the Cowboys will see this when they review their film throughout the week. 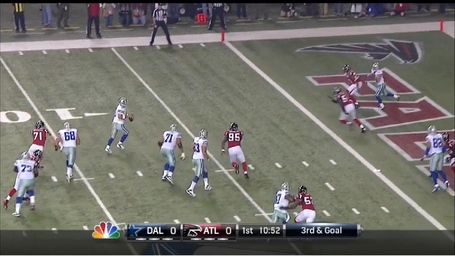 Romo scrambles away and attempts to get the ball to Beasley in the back of the end zone. The throw to Beasley was also never really thought out and Romo kind of flips the ball instead of making a more natural throw. I honestly felt that Romo should have taken off and ran. #54 Stephen Nicholas does come rushing in, but I have faith that Tony can make plays with his legs. He needs to start running the football when he has open room.

The Cowboys settle for a field goal instead of capitalizing and putting a touchdown. The red zone woes continued for the Cowboys in this game. They really need to start putting up seven instead of three. 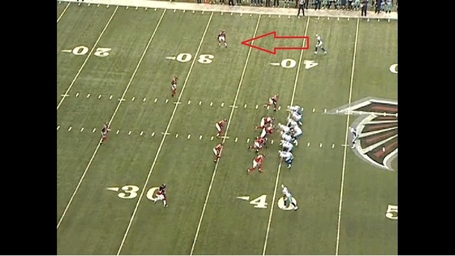 My last missed opportunity came in the second quarter with the Cowboys leading 6-3. Dez Bryant is on the top of the screen and receives Asante Samuel in coverage again. 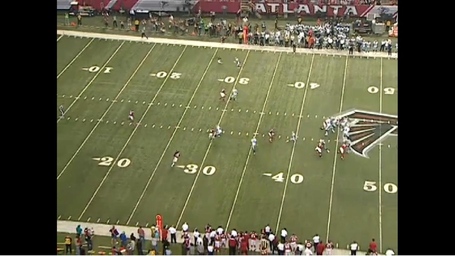 I love the play call by Jason Garrett here because he tested the Falcons deep. Frankly, this is something that we need to see more of from Jason Garrett and the Dallas Cowboys. Testing teams deep does a lot of things for your offense. Not only does it open up the playbook, but it keeps defenses on their feet.

There is also the chance for a big play or pass interference penalty. Big plays help you win games, and the Cowboys are lacking in the big play department this season. 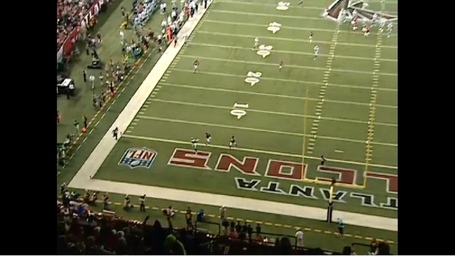 Dez was nowhere near to being one-hundred percent healthy in this football game. You could tell that his hip was bothering him. It didn't matter on this play because Dez runs right by Samuel who was waiting for Bryant to run a curl, comeback or route to the sideline.

Garrett was setting this play up when he had Bryant run various routes earlier in the game that were designed to break off instead of going deep. Once the Falcons secondary had seen those routes, they dialed back their coverage deep. Samuel waits for Bryant to change the route, but Dez just flies right by him and has a lot of open room in the end zone. 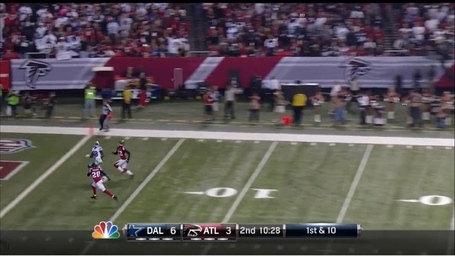 As you can see in the frame above, Samuel is starting to close in and cover some of the ground he gave up to Bryant. If Romo puts a little more on this throw, then it's an easy touchdown for Bryant. 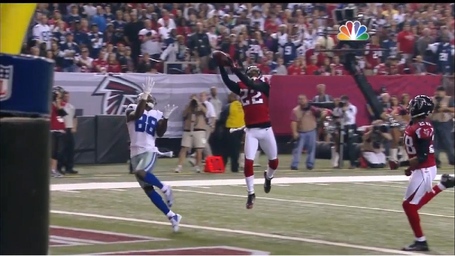 Because this pass is under thrown, Samuel can extend his arms and deflect the pass. Is it a terrible throw? No, by no means is this a terrible throw because of the distance. But Romo didn't put enough on the throw and he failed to lead Bryant into the end zone. There was plenty of room for Romo to lead his wide receiver into a touchdown reception.

Don't get me wrong, this was an outstanding play by Samuel. But if Romo puts a little more on this throw then it's a touchdown.

Later on this possession, Kevin Ogletree drops an easy catch on third down. Garrett then settles for a 54-yard field goal attempt. Dan Bailey probably doesn't have that type of range to begin with and misses the field goal.