With the division title up for grabs in the NFC East, and two wildcard spots left, which of the six remaining contenders have the best chance at postseason spots?

Just as we thought Week 14 could potentially provide a little more clarity in the NFC playoff race, almost all NFC wildcard contenders won their games. Three teams are at 8-5 (Giants, Seattle and Chicago) three more are right behind them at 7-6 (Dallas, Washington, Minnesota).

Whatever the preferred method, the pigskin prognosticators across the nation have once again thrown out some power rankings for your reading pleasure, and we look at how the Cowboys held up against the five other teams in contention for an NFC wildcard spot.

CBSsports.com: 12th (16th). "The emotion of the past few days might sink in soon, so they have to be prepared to move on. Are they good enough?"

ESPN: 13th (16th). "Winning four of five has put the Cowboys on the fringe of playoff contention. Can they weather the injury storm and cash in? (Graziano)"

Fox Sports: 13th (18th). "The Cowboys are now one game above .500 and beat their first team that entered the game with a winning record on Sunday, but I'm not sure they can sustain it through the final three games. Losing Dez Bryant for the season would be detrimental."

Newsday.com: 14th (15th). "Dramatic and emotional comeback win in Cincinnati for the Cowboys, who are still mourning the death of practice squad player Jerry Brown. Tony Romo’s comeback may have saved the season."

NFL.com expert rankings: 14th (15th). Elliott Harrison ranks the Cowboys 15th and provides the blurb: "This defense played most of the second half without its starting nose tackle, defensive end, inside linebacker, other inside linebacker, right cornerback, slot cornerback and strong safety. Yet Rob Ryan's unit held a team averaging 25.2 points per game under 20. Considering everything else this organization was dealing with, you have to tip your cap to the Dallas Cowboys. Unfortunately, there is no respite for this organization. Dez Bryant, who came up a finger long against the Giants two months ago, might be a finger short of finishing the 2012 season."

BeatGraphs.com: 9th (10th). BeatGraphs provide rankings where if team A has beaten team B [insert some math here] team A will be ranked above B.

Massey-Peabody: 12th (13th). These guys generate their predictions by working up from play-by-play data to calculate a performance figure for rushing, passing, scoring and play success. And today, they provide an interesting divisonal ranking graph to decorate our power rankings: 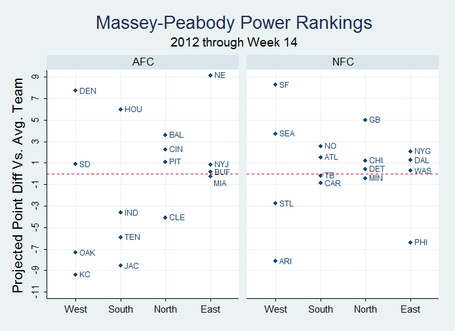 Teamrankings.com: 13th (22nd). This site measures the relative strength of all teams using team performance, home/away status, margin of victory and other factors.

Oddsshark: 14th (14th). Oddsshark use a multitude of stats to establish an offensive and defensive power ranking, which they then adjust for the strength of schedule.

WhatIFsports: 23rd (16th). These guys simulate every possible match-up in the NFL 100 times, and use the winning percentages from those nearly 50,000 games to evaluate every team, with updated rosters and depth charts.

The table below summarizes the power rankings for the six teams in contention for the NFC wildcard spots.