Pick 6 Fantasy Football on BTB: Can You Beat The Machine?

Share All sharing options for: Pick 6 Fantasy Football on BTB: Can You Beat The Machine? 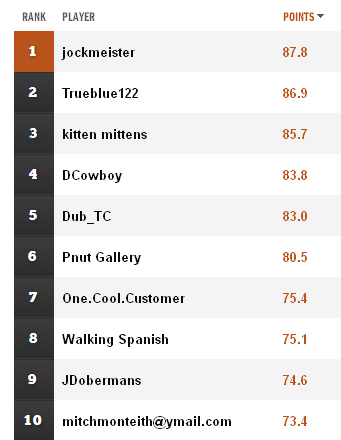 We've been running the Pick 6 Football challenge for a while now, and today is a good time to tally where we stand as community relative to the other 31 NFL blogs on the SB Nation network:

Last week, 86 BTB members entered the contest, the most participants of any SB Nation blog, ahead of Arrowhead Pride (Chiefs) with 64 and Bleeding Green Nation (Eagles) with 56. The other NFC East blogs had even fewer participants: Big Blue View (Giants) had only 20 participants, while Hogs Haven (Redskins) could only get 13 members to participate.

For the first time since Week 10, our winner here on BTB did not finish among the Top Ten across the entire network, but congratulations anyway to BTB-member jockmeister for taking the crown this week with a team featuring Adrian Peterson, Knowshon Moreno and Josh Freeman.

If you want to join in the fun and see you name on the leaderboard, just go to the Pick 6 Football site and pick six players. I guarantee it won't take more than a couple of minutes to select your fantasy team. Then check in next week to see how you did. That's it. No obligations, no hidden fees, no sign-up required, nothing.

The frontpage writers set the bar high this week, as Dave Halprin finished 12th overall and I came in seventh. It's unlikely that we'll be able to repeat that in the next round, so now would be a good time for you to submit your picks. And get it done before Week 15 kicks off on Thursday night.

In fact, get it done right now. What are you waiting for?

This week, instead of picking largely random player names based on what I think may be favorable matchups, I went all data crazy and selected the players I expect to give me the most bang for my fantasy bucks: By dividing a player's cumulative season fantasy points by his current price, I calculated a Points-Per-Fantasy-Dollar metric. I then scanned the top players at each position for the best Points-Per-Dollar value and picked the corresponding player for my team. And to make all of that fit into my tight fantasy budget, I ended up selecting a kicker as my wildcard. Here's what that team looks like:

Show me! Click here to select your team and prove that you can do better than a calculator.