Cowboys Defense Came Through On Money Down vs. Bengals - Will It Hold Against The Steelers?

Third downs are called the "money down" for a reason. Teams that consistently win in these situations usually go far in the NFL. The Cowboys defense has struggled of late on those money downs, but with a little luck, the defense came through against the Bengals and delivered some key stops that helped win the game. Can they repeat against the Steelers?

Share All sharing options for: Cowboys Defense Came Through On Money Down vs. Bengals - Will It Hold Against The Steelers?

Conversely, in four of their six losses, the Cowboys allowed a third down conversion rate 50% or higher. The two exceptions were the Seattle game and the second Giants game, where turnovers and other miscues doomed the Cowboys.

Nevertheless, they're an important part of the game, so today we'll take a closer look at what the Cowboys did and didn't do defensively on third down against the Bengals.

The first thing that stands out upon review of all the third down situations the Cowboys defense faced is that the Bengals attempted to pass the ball on all 11 third downs they faced, regardless of the distance to go. The Cowboys brought out their run defense three times on the first six third downs (4, 3 and 1 yard to go), but then Rob Ryan probably said "Screw it," and stuck with a pass defense for the remaining five third downs.

Nickel vs. Dime: If we stick with a very base definition where a nickel defense has five DBs and a dime has six DBs, the Cowboys lined up in the dime six times, the nickel twice, had four DBs on the field twice and even featured a defense with seven DBs. After some painstaking film analysis, here are the exact personnel formations for each third down the defense faced:

The Cowboys have taken to calling their Dime defense "Dollar personnel", and they've used that package throughout the season. The Cowboys take an ILB off the field and replace him with a physical safety at the point of attack who can cover.

One particularly interesting formation came in the third quarter on third-and-seven at the Dallas seven yard line: The Cowboys lined up with seven DBs, one defensive lineman (Spears), two OLBs (Butler and Ware) and one ILB (Sims) who for some inexplicable reason played the left corner spot. Here's the formation: 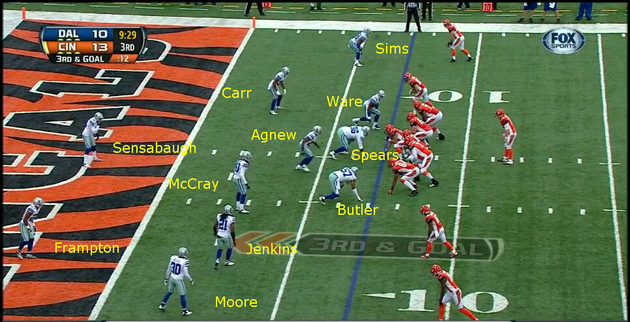 On the play, five Bengals go out on a route. TE Jermaine Gresham, who's lined up with his hand on the ground next to the left tackle, runs straight at McCray and also draws Agnew in double coverage, and pushes both towards the goalline. Below Gresham, WR Andrew Hawkins runs straight at Jenkins and also pulls him back towards the endzone. A.J. Green, at the bottom of the picture, immediately breaks inside, while Moore is stays way back on the goalline. Here's how the play develops as the ball is in the air: 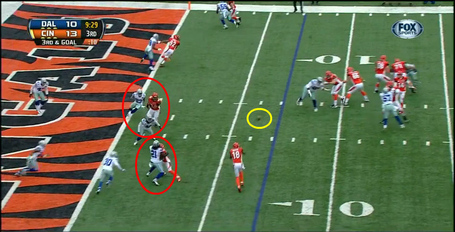 Gresham and Hawkins (circled in red) are trying to clear a path inside for Green, who's just about to catch the ball. In this frame, it look like McCray (below Gresham) still has an angle on Green, and Moore also look like could stop Green before the goal line. Note that while Frampton has begun to move, Sensabaugh hasn't yet. 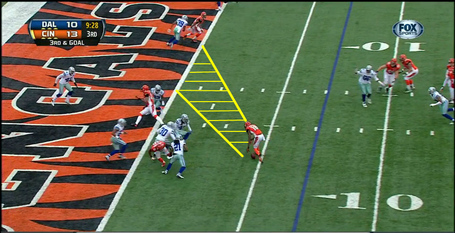 Fortunately for the Cowboys, Green drops the ball, because he would likely have had a clear run to the endzone. McCray was caught over-pursuing and is trying to reverse his momentum, but that would have likely been too late. Moore runs straight into McCray. Frampton continues to follow Gresham into the endzone, leaving Sensabaugh as the only DB who could have stopped Green in a completely empty corridor down the middle of the Cowboys defense.

Keep in mind that the objective of the defense here was to stop the Bengals short of the goal line. And there's a chance they would have done that even if Green had caught the ball. But it certainly looks a little awkward when two receivers look like they are tying up five defenders.

This would prove to be the first of three successive incompletions thrown by the Bengals. On the next two attempts the Cowboys' pass rush got a lot closer to Dalton and arguably impacted the accuracy of his throws. On the final two third down plays, the Cowboys' rushers got to Dalton an sacked him.

A few more things stand out as you review the third down formations:

In football, the third down is often refereed to as the "money down". Every NFL defense works hard to stop its opponent from converting third downs, and teams that consistently win in these situations usually go far in the NFL. The Cowboys defense started the season as a strong 3rd down unit but have struggled with their third down defense the last few games as injuries have started taking their toll. The Bengals aren't exactly a powerhouse offense on third down, but it's encouraging to see that the Cowboys at least held their own - and yes, luck is part of that equation too.

That luck needs to hold on Sunday: The Steelers are the fourth best third down offense with a conversion rate of 44.3%.