We take a closer look at DeMarco Murray's 6-yard run that set the Dallas Cowboys up to close out the Cincinnati Bengals.

The return of DeMarco Murray continues to pay dividends for the Dallas Cowboys. You have to look past the statistics and watch the film to truly appreciate how good Murray is. When the Cowboys wanted to close out the Cincinnati Bengals, they fed Murray the ball. His physical running style picked up the hard yards needed to move the ball down the field, but he also used his athleticism to create separation from the defense. It's really fun to watch a big running back like Murray use his acceleration and run right by defenders.

On Dallas' game-winning drive, Murray accounted for 32 yards on the 50-yard drive. The Cowboys ran 13 plays on that drive, and Murray was the main player in 9 of those plays. Great players want the ball in crunch time. Murray has the potential to become a great player. He is very competitive and he wants the ball when the game is on the line.

Let's take a closer look at the biggest play of the game. 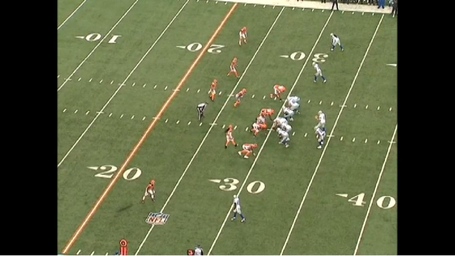 Jason Garrett continues to say that he wants to run the ball more. Running the ball here shows that he is committed to the running game. Garrett calls a shotgun set with three wide receivers, one running back and one tight end. Jason Witten is lined up on the right side of right tackle Doug Free. 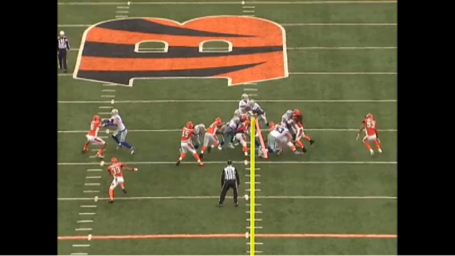 Safety Reggie Nelson creeps towards the line of scrimmage before Tony Romo snaps the ball and blitzes. Defensive coordinator Mike Zimmer decides to bring the heat and sends a heavy blitz at the Cowboys' offensive line hoping to sack Romo. With the way the line has played in 2012, it's really not surprising that defensive coordinators are willing to use the blitz against us late in the game.

This was a good call by Garrett because of Zimmer's aggressiveness. If Murray can clear the first level, then he is going to be in a good position to pick up a big chunk of yardage. Garrett rolled the dice by running the ball, but he showed good awareness of what the opposition was doing and he adjusted to it. If Garrett continues to adjust during the game, then he will become a great play-caller. 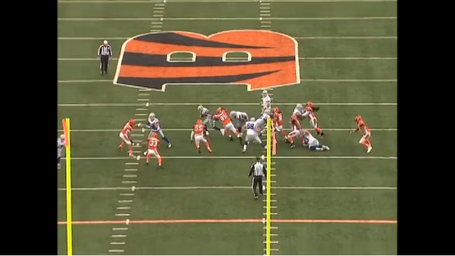 Romo hands the ball off and Murray immediately sweeps to the right. Defensive tackle Wallace Gilberry dives and attempts to take Murray down. Murray shrugs him off and continues to bounce it outside. Vontaze Burfict has a shot to meet Murray in the backfield, but DeMarco is just too fast for Burfict. 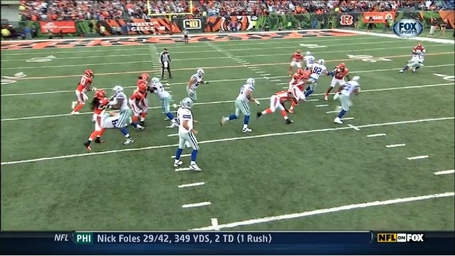 This play could have went for nothing. Look at all of the Bengals moving with Murray to the right side of the field. It appears that Nate Livings may have been pulling out to the right side to give Murray a lead block, but he never gets there. Livings gets pushed straight back and looks like he is on ice skates. Doug Free completely whiffs on Burfict and nearly gets this play blown up for negative yardage. 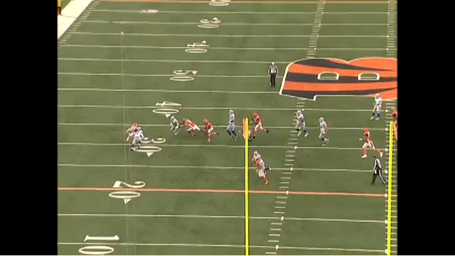 Jason Witten holds his block long enough for Murray to take this run outside and up the field. Dwayne Harris showed in the pre-season that he was a willing blocker. He takes out Terence Newman, but it was close to a block in the back. 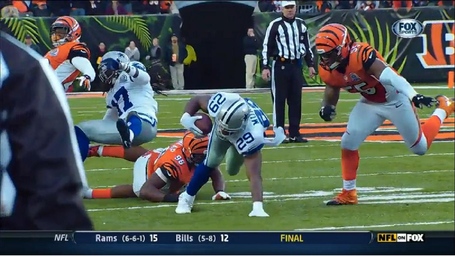 Carlos Dunlap makes a diving attempt and gets a firm grip on Murray's legs. DeMarco breaks out of the shoestring tackle and loses his balance, but he doesn't go down easily. Murray knows that the game is on the line and gives everything he has to pick up this first down. 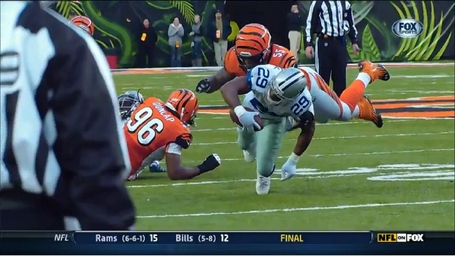 Burfict shows great hustle on this play and followed Murray from the beginning to the end of this run. He finally makes a diving attempt to take Murray down before he gets the first down. Even with Burfict draped over his back, Murray lunges forward for the first down. 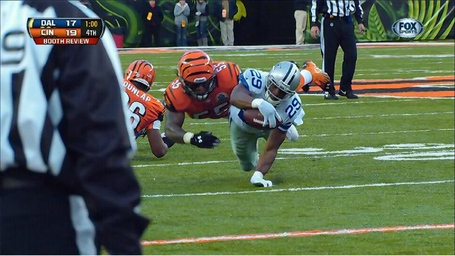 Murray then extends the football out before his knee hits the ground and securely picks up the first down. Felix Jones can be good at times, but he cannot do what Murray did here. We've seen Felix lunge forward for extra yardage before, but Murray is one of the best at this. He is the perfect combination of size, strength and speed and puts all of those unique abilities on full display here.

Murray is a special running back that is being prevented from running wild due to his offensive line and injury. If the Cowboys can ever get their needs on the offensive line taken care of, then Murray would be one of the best running backs in the NFL. He has the talent, he just needs the blocking and to stay away from the injury-bug.