Is Anthony Spencer An Option At Inside Linebacker Versus Steelers?

In recent weeks, Anthony Spencer has been repeatedly spotted lining up at inside linebacker. Is this something the Cowboys should try more often or is Spencer more important as an outside linebacker rushing the passer?

Share All sharing options for: Is Anthony Spencer An Option At Inside Linebacker Versus Steelers?

By now, most Cowboys fans are aware that OLB Anthony Spencer has historically been asked to drop into coverage far more often than his bookend OLB partner, DeMarcus Ware.

But what not all fans may know is that in addition to dropping back into coverage, Anthony Spencer has repeatedly lined up at inside linebacker in recent weeks, mostly playing a kind of underneath zone. Here are a couple of very recent examples from the game against the Bengals, starting with a play on 1st-and-10 in the first quarter: 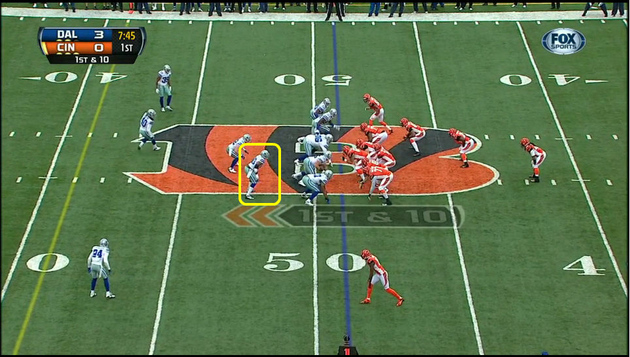 This play turns out to be an end around to WR Marvin Jones, who runs the ball for the Bengals' biggest gain of the game, a 37-yard scamper. Spencer gave chase, but it was McCray who ultimately forced Jones out of bounds.

In the second quarter, this time on 2nd-and-9, Spencer again lines up at ILB and plays a soft zone coverage. 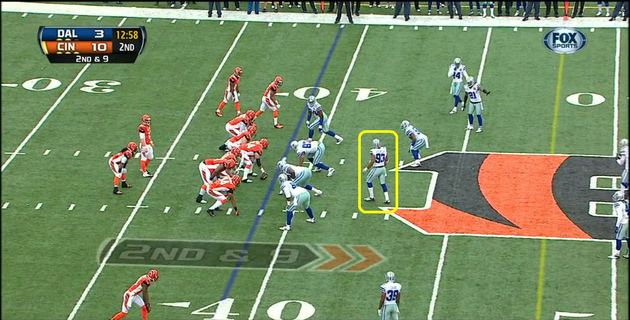 The play ends up going away from Spencer to A.J. Green, who's lined up at the bottom of the picture above, and who has an 11-yard reception against Brandon Carr. Incidentally, the much-vaunted Green was held to three receptions for 44 yards by the depleted Cowboys secondary.

The next example is from the fourth quarter. It's 3-and-12. Spencer lines up in coverage roughly where the 1st-down-marker would be. The Bengals keep seven guys in to block only three Cowboys pass rushers (from left to right: Victor Butler, Jason Hatcher, DeMarcus Ware) which leaves eight Cowboys in coverage against only three Bengals receivers. Dalton predictably can't find an open receiver and Ware eventually chases him down for a sack. 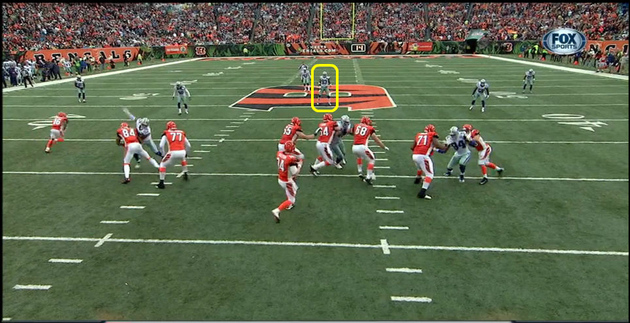 The final example is also from the fourth quarter. It's 3rd-and-4 with 4:40 left in what will turn out to be the Bengals final offensive snap of the game. 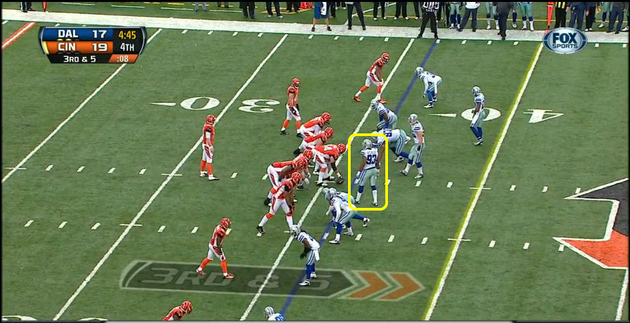 Spencer is once again lined up at inside linebacker in the Cowboys' dime defense, but this time he's much closer to the line of scrimmage, and doesn't drop back into coverage the way he's done in the previous examples. Instead, Spencer rushes, quickly beating guard Kevin Zeitler inside and getting to Andy Dalton for a sack. This play showcased an underrated aspect of Spencer's game: he's a great A-gap blitzer. And having that extra threat to account for adds an extra dimension to the Cowboys game that they may not have with somebody else lined up at ILB. (Coty Saxman had a nice post up after the Tampa Bay game in which he broke down a couple of plays in which Spencer was lining up in the A-gap. Follow this link for more.)

However, for all his athleticism as an OLB and/or A-gap pass rusher, Spencer isn't a player who'll be able to cover a receiver step-for-step, and he'll quickly find himself a step or two behind whoever he's covering. But his football instincts will undoubtedly be an advantage when he can play in some kind of zone situation on passing downs.

The Cowboys have been depleted by injuries at inside linebacker this season, and will likely have Brady Poppinga and Ernie Sims active on Sunday at ILB (in addition to Dan Connor). No offense to either player, but that's two players who joined the Cowboys as street free agents this season - after no other team in the league wanted them.

At OLB, the Cowboys still have their top three guys relatively healthy, which means that fourth-year OLB Victor Butler could be available for more snaps. For the Cowboys, the question then becomes whether Spencer at ILB and Ware and Butler at OLB is a better option than Ware and Spencer at OLB with Sims and Poppinga/Connor at ILB.

What do you think? Would you give Butler more snaps at OLB and have Spencer line up at ILB a little more often, or would you stick with a Sims and Poppinga/Connor combo at ILB?