Anhony Spencer has been the signal-caller for the Cowboys defense for a while now, and one specific example from Sunday's game shows that he seems to be pretty good at it.

Despite HD, NFL gamepass and the All-22 film that we have available these days to watch and enjoy NFL games, one thing the NFL doesn't regularly give us is a chance to listen to what the players are saying on the field. Of course, the NFL occasionally mic's up a player or two, and after careful editing by NFL films, we get to hear what a player is saying during a game.

But on Sunday, we briefly heard some live audio from the game against the Steelers. As our own Brandon Worley was re-watching the game, he noticed a specific play that's worth reviewing:

It's early in the first quarter, the Steelers face a 3rd-and-10 on their own 33 (this is just after the officials overturned the fumble by Emmanuel Sanders). The Steelers line up with three wide receivers, one on the left and two on the right. Just before the snap, they motion tight end David Paulson from the left to the right. 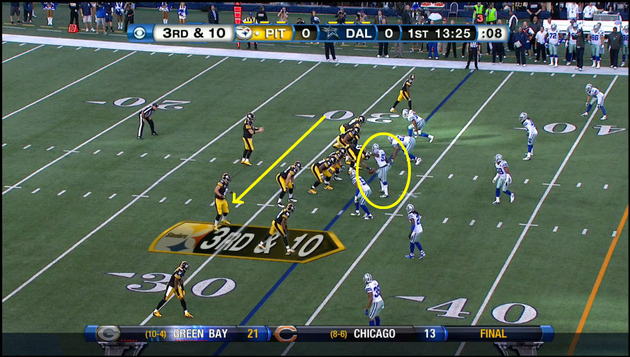 As a result, Victor Butler, who lined up as the left OLB, moves a little further outside, and instead of rushing the QB, plays the quarterback's eyes. The screenshot below shows the situation just as Roethlisberger releases the ball. Butler is now sitting pretty and waiting for the screen, Mike Jenkins has jumped his route in anticipation of a screen to Mike Wallace (17), and DeMarcus Ware is about to hit a big mass of lard. 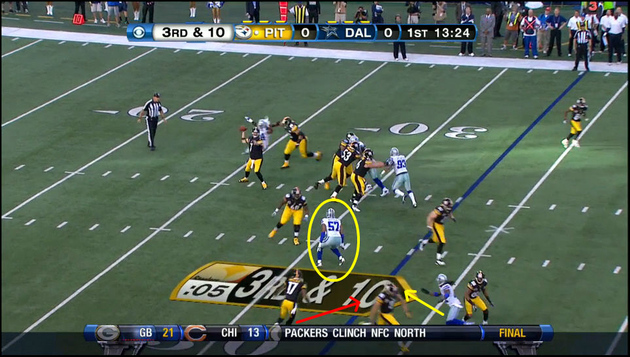 Roethlisberger throws the ball and Butler is in a perfect position to make a play on the ball: 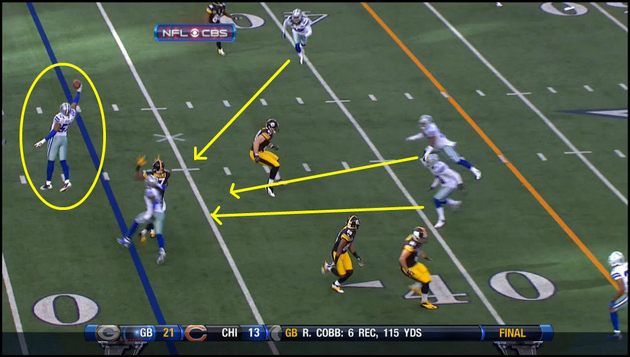 Despite making an athletic play for the ball, Butler can't hang on to it, and neither Jenkins nor Sims or Sensabaugh (the two guys rushing in from the top) can get there fast enough to catch the tipped ball.

The Steelers love the quick screens outside on third and long. The Cowboys knew this coming into the game, and the Cowboys coaches certainly prepared their players for exactly those plays. But in the end, it's up to the players to execute, and on this one specific play from Sunday's game, it was Spencer who made sure the Cowboys executed perfectly.

Or as Brandon said: "Man, that was an awesome play."