In this week's film session, we take a closer look at Tony Romo's 24-yard touchdown pass to Dez Bryant against the Steelers.

The Dallas Cowboys are beginning to make up for their poor performance earlier in the season. The 2012 season started out with a great win against the New York Giants, but the Cowboys didn't carry over that momentum into their other games. Regardless of what happened before this winning streak, Jason Garrett finally has his team playing at a level that could get them into the playoffs.

With so many injuries, it's amazing that the Cowboys are winning games against good teams. To make matters worse, we learned that Dez Bryant suffered a broken left index finger during the game against the Cincinnati Bengals. Heading into the game against the Pittsburgh, Bryant's status was in doubt. There is no question that Bryant's departure from the lineup would have been a drastic loss for the offense.

Dez got the opinions of a couple doctors, but he decided to put off the surgery until the offseason because the Cowboys are still in the hunt for the playoffs. While Dez didn't dominate the Steelers, he scored another crucial touchdown in the second half that gave his team the lead. He is committed to winning, and that is the type of behavior Garrett expects from his players. 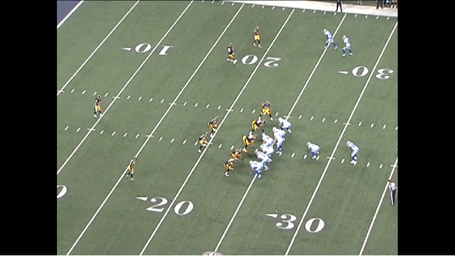 The Cowboys sustain a great drive in the third quarter and are heading into the red zone. On first down, Garrett sends out a pretty basic formation. Garrett's "21 personnel" consists of one running back, a fullback, a tight end and two wide receivers. With the fullback becoming somewhat obsolete, this basic formation isn't as familiar as it used to be in the NFL. 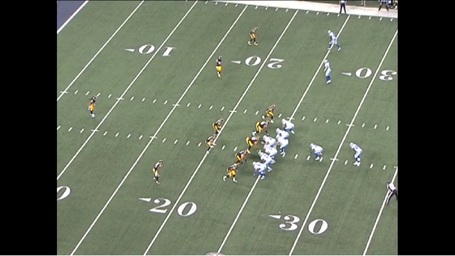 Right before the snap, Miles Austin motions out to the slot. This is key in the play because it spreads the field and opens up man-to-man coverage for Austin and Bryant. Josh Victorian will take Austin, while Keenan Lewis will take Bryant. Troy Polamalu is the high safety and is responsible for the deep part of the field. 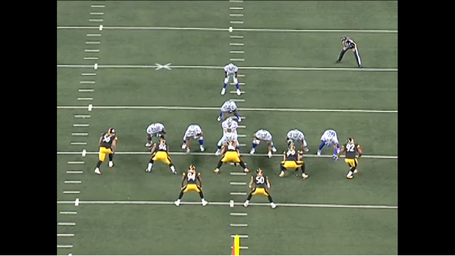 The Steelers operate out of their basic 3-4 defense. LaMarr Woodley and James Harrison line up at outside linebacker. Ziggy Hood and Brett Keisel line up at the defensive end spots, while space-eater Casey Hampton lines up at nose tackle. Lawrence Timmons and Larry Foote line up at the inside linebacker positions. 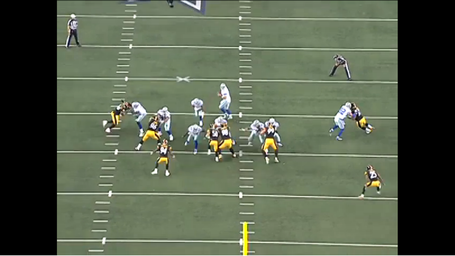 Romo runs a great play-action fake to DeMarco Murray. Timmons and Foote take the bait and immediately fly towards Murray. Jason Witten stays in and blocks Harrison effectively. Jeremy Parnell takes care of Woodley from the beginning, but he cannot hold him forever. The rest of the line does their job and holds up in protection. 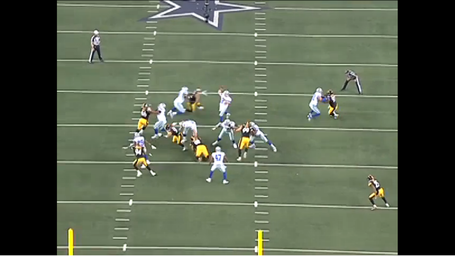 Parnell holds off Woodley long enough for Romo to get the ball out quickly. If it came down to it, Romo probably could have just stepped up and made the throw. 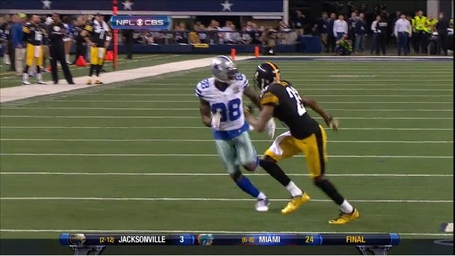 Romo was going to throw the ball to Bryant the entire time. This back-shoulder throw is a low-risk play call because if the quarterback gets the ball to the sideline, then the defender has no chance to really make a play on the football. If the wide receiver gets enough separation, then it's going to be a very successful play. Later in the game we saw what happens when the quarterback doesn't get the ball to the sideline. Ben Roethlisberger's attempted pass to Mike Wallace was the exact opposite of Romo's throw 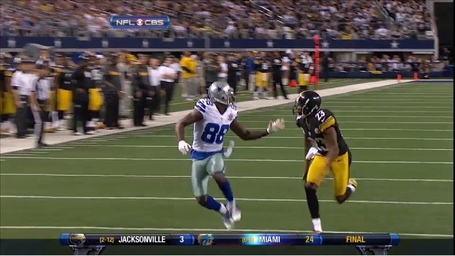 Bryant takes Lewis up the field and uses his athleticism to gain enough separation to put himself in a good position to catch the ball. Over the course of his route, Bryant shows tremendous footwork. 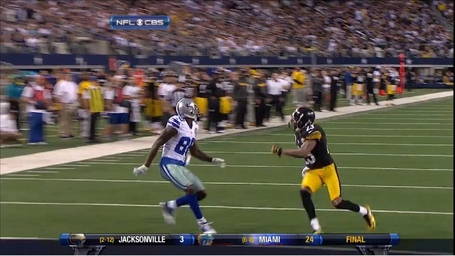 By the time Lewis realizes where the ball is going, Bryant has already begun to backpedal to the sideline. Lewis never looks back for the football and decides to react off of what Bryant is doing. This play is nearly impossible for the cornerback to defend unless he sticks to the wide receiver like glue. In order to stop this play from being a completion, you must have lockdown coverage. Lewis doesn't do this and Bryant just gets too far away from him. 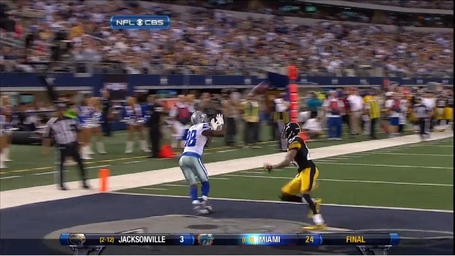 This was an easy touchdown, but this was perfect execution by Romo and Bryant. Romo made a perfect throw where only his wide receiver could make the catch. Bryant ran a perfect route and created separation by using great technique and footwork. The back-shoulder throw is one of my favorite plays that Jason Garrett runs. Garrett dialed this up at the perfect time and the Steelers could not defend it. 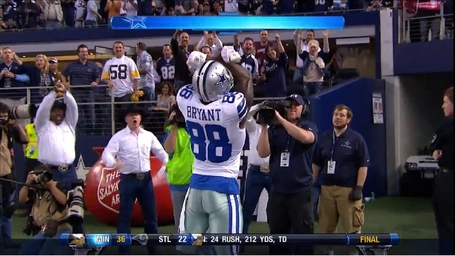 Just a few months ago, Bryant couldn't even run a route correctly. His route running has drastically improved over the course of the season and Dez continues to grow in front of our eyes. Meanwhile, Romo is tearing it up in December. The combination of Romo and Bryant could carry the Cowboys into the postseason for the first time since 2009.