Pick 6 Fantasy Football on BTB: Get Your Groove On

73 BTB members participated in our weekly Pick 6 Football game last week. All but one of those participants finished ahead of one of the front page writers, and the other writers didn't exactly dazzle anybody either.

Share All sharing options for: Pick 6 Fantasy Football on BTB: Get Your Groove On 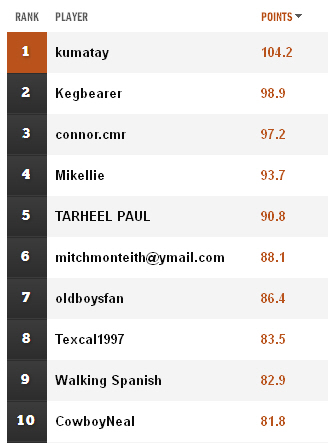 Before we get to the beatdown the community administered onto the three participating frontpage writers in our weekly Pick 6 Football game last week, let's first review the winner:

In just the second week as a participant, BTB-member kumatay took the crown with a team built around Drew Brees, Dennis Pitta and DeAngelo Williams. Kumatay's score of 104.2 was good enough to rank 6th among all SB Nation participants

The fact that this week's winner had only played this game once before serves as a welcome reminder that there's no easier way to have a little fantasy football fun than with our Pick 6 Football game. Just go to the Pick 6 Football site and pick six players for your fantasy team in a couple of minutes. Then check in next week to see how you did. That's it. No obligations, no hidden fees, no sign-up required, nothing.

For the frontpage writers, Week 14 was a completely forgettable week. Archie Barberio finished 72nd out of 73 participants. I wasn't noticeably better, coming in at No. 64, and even Coty Saxman failed to finish in the top half at No. 43. Not a particularly dazzling performance by any of us. Then again, our names are on the masthead because we're supposed to write, not because we're supposed to be right.

If there ever was a time to join the contest, now is the time. Click on the banner below to submit your pick, and get it done right away. You're Mom always told you not to procrastinate. You should have listened. There's nothing more important right now than getting your fantasy picks in.

After last week's debacle in which I tried to calculate myself to the top of the rankings, I'm now firmly back to looking for favorable matchups. Let's see if this works. Here are my picks for Week 16: