By successfully running the ball early against the Steelers, the Cowboys set up their play-action game. We review three key plays showing how the threat of a run helped open up the Cowboys passing game.

Share All sharing options for: How The Threat Of The Run Helped Open Up The Cowboys Passing Game

The Cowboys have rushed for just 1,125 yards so far this season. That's the second lowest total in the league, right behind the woeful Arizona Cardinals. Sure, not having DeMarco Murray for six games this season contributed to that, as did the fact that the Cowboys have been playing from behind much more than they've been playing with a lead. Oh, and an O-line that's having trouble blocking for the run is no help either.

The Cowboys 3.5 YPA on the ground is tied with the Cardinals for the lowest value in the league - yes, those selfsame Cardinals who only managed 7 total rushing yards against the 49ers in Week 8. Incidentally, the Cowboys managed only 19 yards rushing against the Giants that same week.

There was a time earlier in the season when nobody respected the Cowboys rushing game. Not the opponents, not the media, and not even the die-hard faithful here on BTB.

The inability to get anything going on the ground in turn led to more pressure on the passing game to deliver. The Cowboys have thrown more this year than ever before, but for less yards, as the opponents have taken away the deep and intermediate pass by playing their safeties and linebackers back. For large parts of the season, the Cowboys were forced to dink and dunk their way up the field, as there was no room for the long downfield pass.

The opponents could play this way because they knew the Cowboys wouldn't be able to make any big gains on the ground, and certainly not consistently.

But all of that has changed over the last few weeks. The Cowboys are still not putting up great numbers on the ground, but that's not the point. What has changed is that the threat of a run must now be accounted for by opposing defenses. And this has opened up all sorts of opportunities in the passing game, as we'll see from the next three plays from the Pittsburgh game:

The Cowboys need one yard, there's no secret what's about to happen, and the Steelers stack the box accordingly. The Cowboys have three tight ends on the field.

The two linebackers Timmons and Foote are in close, and safety Polamalu is prancing around in front of them, but moving towards the right side of the Cowboys line. The Cowboys run to the left. 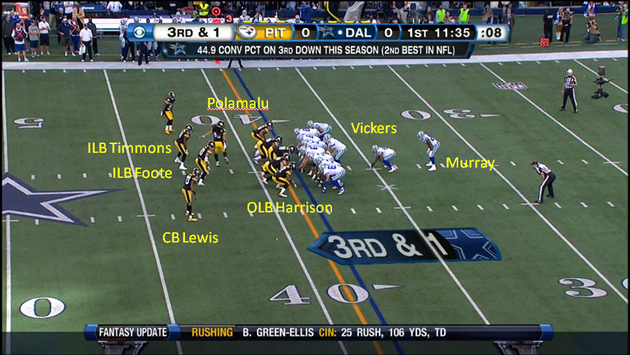 Vickers successfully blocks CB Keenan Lewis out of the way, but ILB Larry Foote has sniffed out the play. Jason Witten, who's lined up on Tyron Smith's left shoulder, initially helps Smith in blocking OLB Harrison, but releases just a little bit too late to effectively block the onrushing Foote.

DeMarco Murray and Foot meet at the 40-yard line. 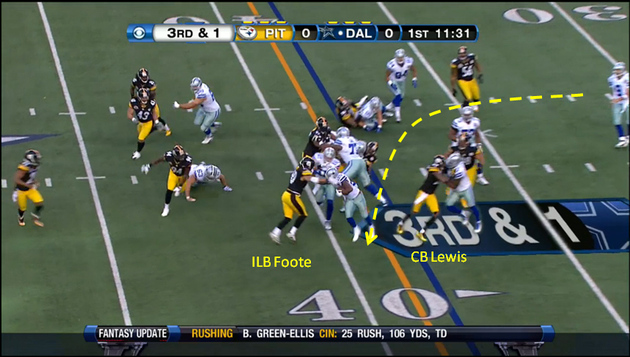 DeMarco Murray says: "Take this, man, I'm not going down," and delivers a stiff-arm for the ages that carries him and Foote six more yards down the field before they both finally go down. That's how you earn respect as a runner, and as a running game.

The Cowboys have lined up in a two-TE set. John Phillips is sitting on the left shoulder of Tyron Smith, and just before the snap, Jason Witten motions over from the right side to give the Cowboys two TEs on the left side of the line. This smells like a run. 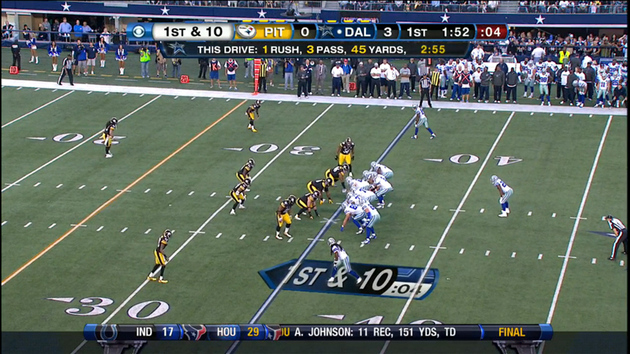 The Cowboys snap the ball, and before Romo has even handed off the ball, the two Steelers linebackers (94: Timmons, 50: Foote) take off to their right in pursuit of the ball, as does Troy Polamalu, who was lined up about 15 yards deep behind the line of scrimmage. 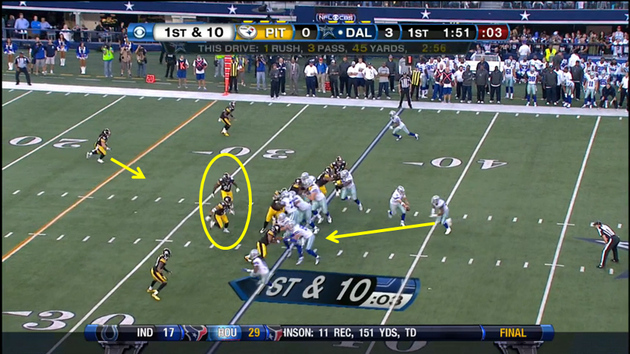 Murray initially runs into into DE Brett Keisel, but recovers and bounces outside. In the meantime, Jason Witten has pushed OLB Lawrence Timmons to the ground, Tyron Smith has blocked Larry Foote almost out of the picture and John Phillips has locked down free safety Ryan Clark downfield.

But the key block here is sprung by WR Dwayne Harris, who blocks CB Keenan Lewis right into the onrushing Brett Keisel and clears a lane for Murray that will take him 28 yards downfield. 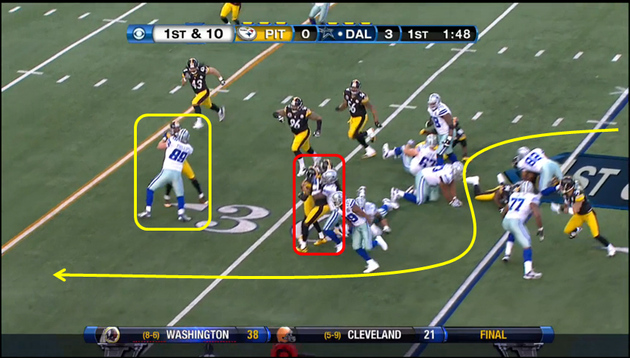 The Cowboys are in the red zone, and Tony Romo is just about to fake a handoff to DeMarco Murray, who is lined up to Romo's left and will move to the right. Witten is lined up next to Doug Free on the right and will release upfield. 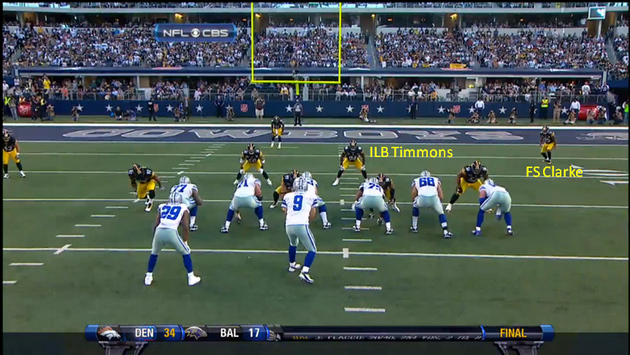 At the moment of the fake handoff both ILB Timmons and FS Clarke are focused entirely on DeMarco Murray and the threat of a run. Timmons starts moving towards the line of scrimmage, Clarke has already moved up five yards from where he was in the previous screenshot.

Both appear to be oblivious to the 6-5 tight end running a simple seam route into the free zone the ILB and the safety have just vacated as they were trying to play the run. 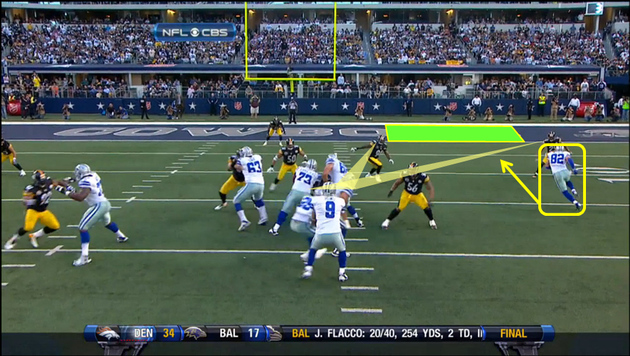 Once the ball is in the air, there's little the defense can do anymore. The linebackers can't get deep enough, the safety came up and can't get back in time and Witten make the easy catch. 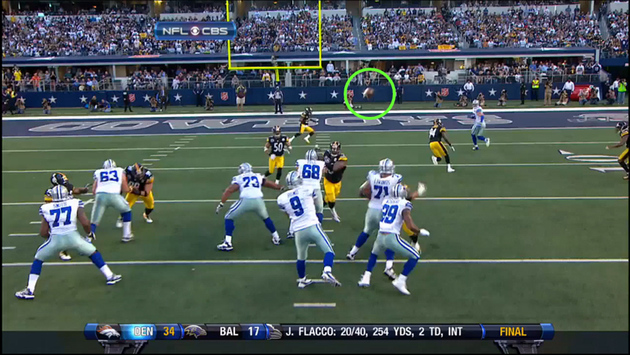 Even Jason Garrett concurs: the Cowboys are thriving in play-action with Murray back on the field:

"I think it gets better the better you’re running the football. I don’t think there’s any question about that. They play more run defense. It all fits together. That’s why you want to be able to attack the defense in a lot of different ways."