Last week's game against the Steelers showed the Cowboys playing at their recent best. This performance has been the culmination of established veterans finding another level of performance in addition to young players blossoming seemingly out of nowhere. Illustrating that point are Anthony Spencer and Jermey Parnell, who I've highlighted below.

I don't want to spend too much time looking back at what the Steelers did, but one particular play really frustrated me. I mentioned in my pre-game article last week that I don't think Ben Roethlisberger is nearly as capable of avoiding pressure as Tony Romo.

As if to prove me wrong, the commentators quickly heaped the praise on Roethlisberger for 'avoiding pressure' for 8.9 seconds en route to a touchdown pass to Heath Miller. 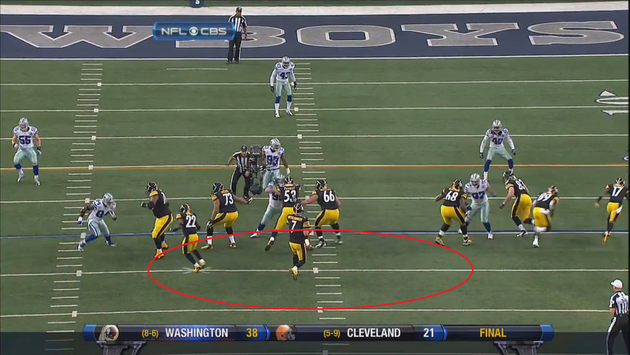 This red circle is my attempt at representing Roethlisberger's pocket. 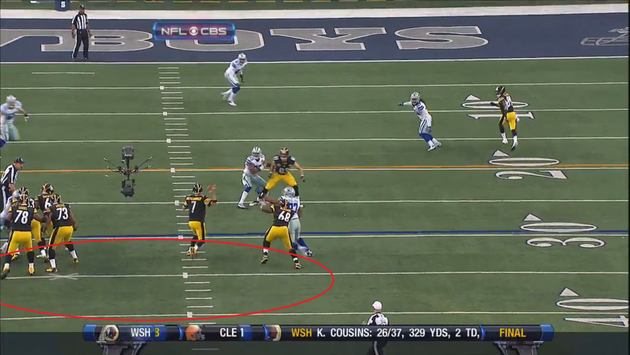 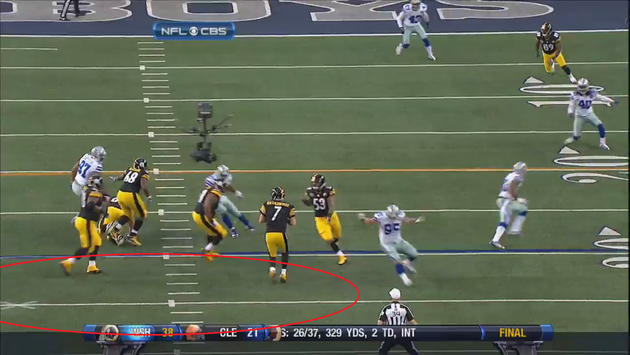 And one last time, as Lissemore whiffs trying to pull Ben down by the shirt. Not until Roethlisberger is in the act of throwing the pass does a Cowboys player set foot within that red line.

You got a clean pocket for 8.9 seconds, Ben. Congratulations. That says nothing of your ability to avoid actual pressure.

While we're on the topic of the Steelers' line performing so well, I thought I'd offer up a footnote. Our own line, as we know, has not performed up to our expectations/aspirations/desires this season. In this particular game, however, it appeared that our pass rush, despite our injury-riddled front, was much more efficient at providing pressure than the Steelers'. This has been true throughout the season, in fact.

Let's compare them to our pair: Anthony Spencer has 80 tackles and 10 sacks in 12 games. DeMarcus Ware has 54 tackles and 11.5 sacks in 14 games. No matter how you choose to look at it, Dallas has the superior pass rush, individually, as a pair, or as a team.

Anyway, let's move on to the things that will matter going into today's game. That's just another way of saying we can keep talking about that pass rush. 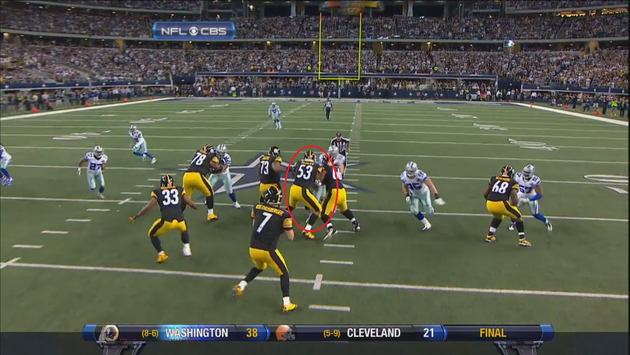 This is the first of two consecutive sacks. In this one, Lissemore is allowed to come free. Getting a sack in this manner is not incredibly impressive (especially since he nearly missed), but I saw something else impressive about this play. Inside the red circle, should you choose to believe me, is Anthony Spencer, who spent a lot of time playing Defensive Tackle (!) in our 4-man fronts (Nickel sets). He's being double-team blocked by Maurkice Pouncey and David DeCastro, who I'm sure most of you would love to have on our interior line. 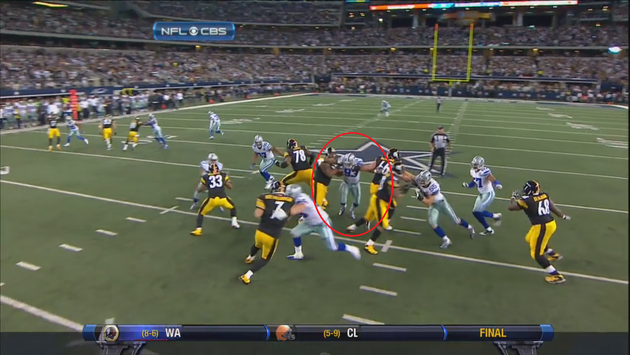 And, despite this seemingly top-tier tandem teaming up on him, Spencer splits them like a French infantry formation. (Pouncey, at this point, had peeled off to help outside, but Foster, the left guard, took his spot in the double-team) 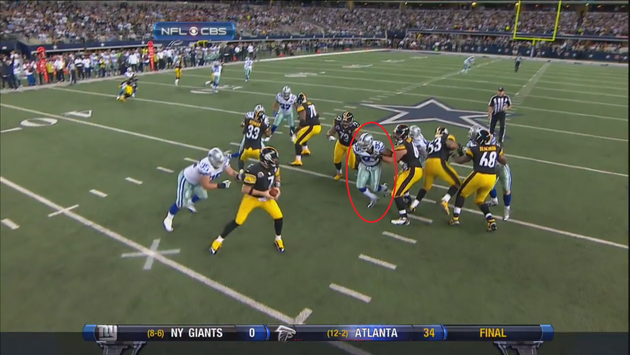 Finally, as Lissemore tries his hardest not to completely whiff, Spencer has broken through and presents a direct threat to Roethlisberger. DeCastro's hold and a subsequent push from behind from Foster force Spencer past the play, which is finished by Lissemore.

The very next snap has Spencer lined up in the 7-tech on the Steelers' backup right tackle, rookie 7th-rounder Kelvin Beachum out of SMU. 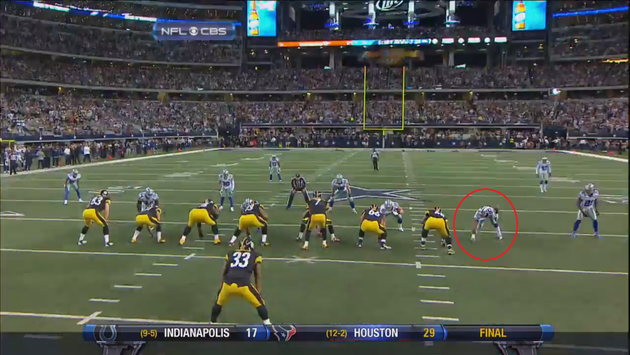 This is a one-on-one assignment, and a matchup you expect Spencer to win. 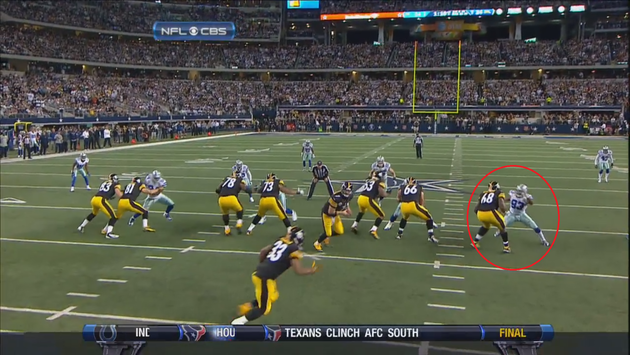 Spencer is executing a very quick outside fake (in the still, he's recovering back inside) and has baited the rookie into setting up outside. Note that the rookie's base has narrowed significantly to accommodate the change of direction. 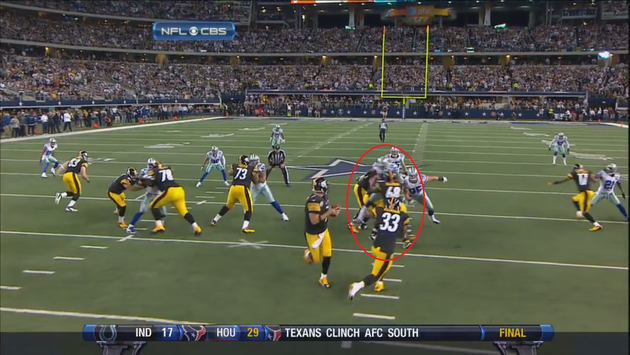 Spencer took his rush all the way inside, but Beachum seems to have recovered and gotten back in between Spencer and Roethlisberger. 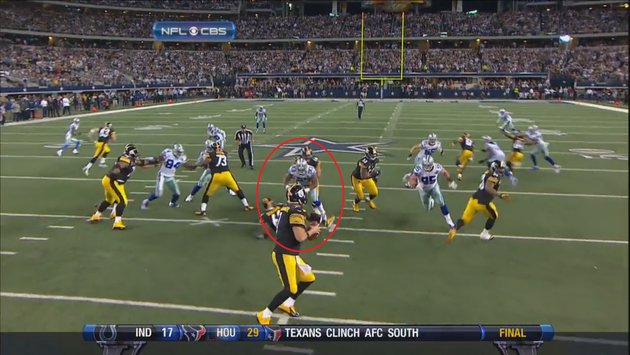 I really recommend finding a way to watch this in real-time. Spencer completely levels the poor rookie (and note the sneaky DeCastro attempting to bear hug Spencer) and has a clear path to Roethlisberger. 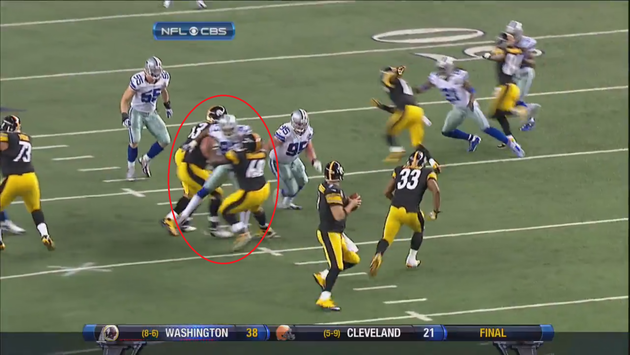 One more angle helps to illustrate how crazy this move was on Spencer's part. He jumps between DeCastro and Beachum, and delivers a one-armed shot to Beachum's chest strong enough to completely de-cleat him.

Shifting gears, we'll take a look at how Jermey Parnell's been playing. Is he ready to take the starting job, or is he just a motivational ploy to get Doug Free to up his game? 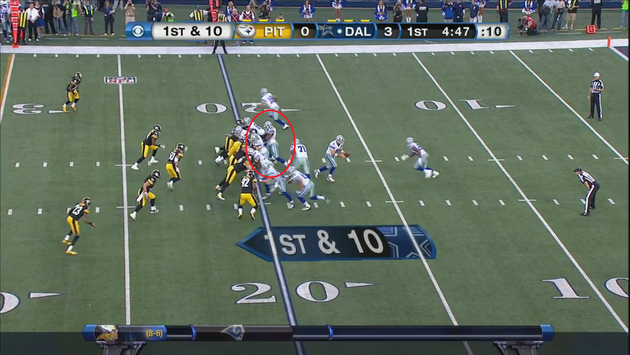 Immediately after the snap, things don't look good. Parnell's been stood up, and it looks like he's about to have done to him what Spencer did to Beachum in the last highlight. So far it isn't looking good. Just a glance down the line shows that every other player on our line is playing with better leverage on this play. 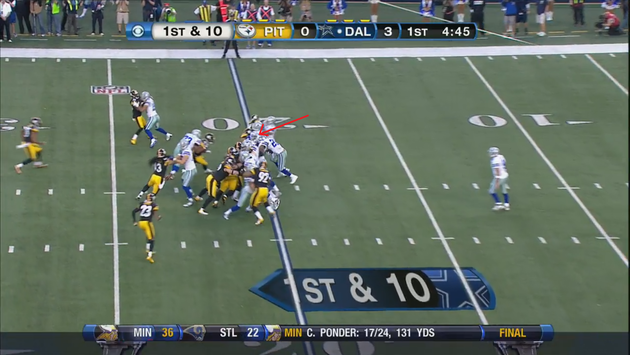 As the play develops, however, you see why the Cowboys have kept this guy around. From a seemingly impossible position, Parnell has actually managed to push his man a full yard backwards on the running play. With proper leverage, it seems he has the potential to become a pancaking machine, and a true bulldozer in the running game. 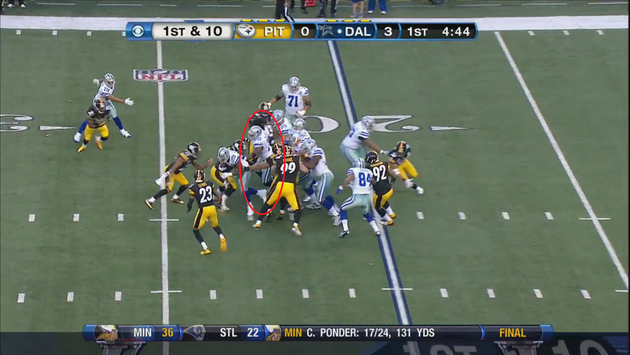 Just for emphasis, he finishes the play by plowing forward for another 3 yards, helping Murray to get up the field. I've been feeling like Doug Free is more of an obstacle in the running game, getting in the way of both teams equally as he tentatively approaches the defender to negotiate passage.

I don't have much else to show you, so I'll finish up with my overall impression of Parnell's play. The first drive I noticed him play was the one I captured frames from above, which ended in Murray's fumble on the 7. The other drive that I noticed him playing in was the 3rd quarter drive ending with the Dez Bryant touchdown. That drive featured Parnell heavily in pass protection, where he looked very natural. He was matched up with Woodley on essentially every snap, and stayed in front of him with very little difficulty.

On the screen play to Harris, Parnell was slow getting outside and then whiffed on a block behind the ball. Translation: he needs work playing downfield. I wonder how much Bill Callahan has impacted Parnell's progress, positively, since he arrived. It's possible that Parnell's poor leverage in the running game is a technique error that remained uncorrected by Hudson Houck, who had a reputation for being uninterested in developing young players.

Regardless, Parnell in his current state is a very good backup tackle, and someone who could challenge for a starting spot, somewhere, as early as next season. The fact that he only logged playing time (that I noticed, outside of heavy sets) in the 1st and 3rd quarters indicates to me that he still hasn't earned the trust of the staff to execute in critical situations. He's still a very good player to have on the roster and, thanks to an extension he signed this past offseason, he'll be in Dallas for two more seasons.