The Cowboys had to move their practice to Cowboys stadium due to the weather, and once there found that they didn't have very many healthy linebackers left to practice with.

The Dallas Cowboys moved their Wednesday practice to Cowboys Stadium after their practice field at Valley Ranch was covered in snow today. Garrett said earlier that the Cowboys didn't have the equipment to get the practice field ready in this kind of weather:

"It’s just not functional right now," Garrett said. "It’s a sheet of ice. We don’t have all the necessary equipment to thaw it out to the point where we are able to practice."

Here's a picture of the practice field courtesy of Shannon Gross as retweeted Tim MacMahon of ESPNDallas: 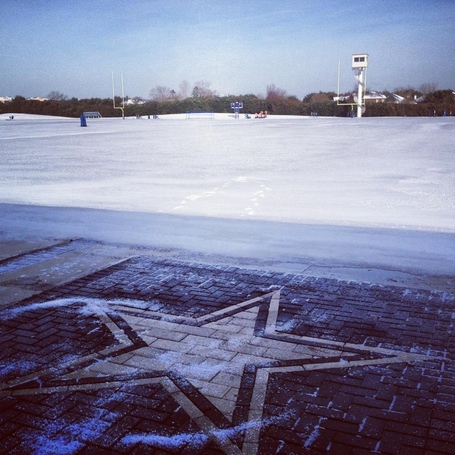 For what it's worth, the Redskins also had to practice indoors today, as their practice fields were just as iced over as the fields in Valley Ranch.

Looks like the Cowboys only have three healthy linebackers left on the roster in Anthony Spencer, Dan Connor and Kyle Wilber. All others showed up at practice with some kind of injury:

In other injury news, Jason Hatcher sat out today's practice with a thigh bruise, but said he expects to practice on Thursday. Fellow defensive lineman Robert Callaway apparently missed practice for the same reason Poppinga did.

DeMarco Murray was a full participant in practice today, the first time he's practiced on a Wednesday since coming back from his foot injury. Dez Bryant (finger) and Felix Jones (knees) were both also full participants. Safety Matt Johnson was also practicing, but he won't be eligible to rejoin the roster until sometime in January.

Jay Ratliff is out for another couple of weeks after undergoing surgery on a sports hernia earlier in the month.