If you're still not participating in the Blogging The Boys' Pick 6 challenge, this is your last chance this season to join us for a chance at fantasy football glory as you compete against BTB's writers and fellow readers. 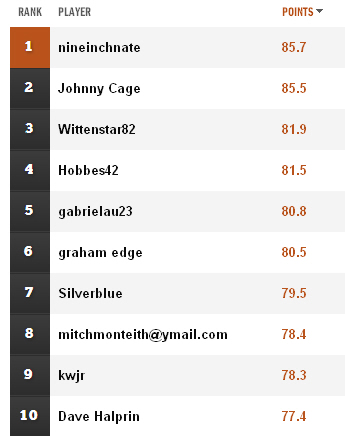 This is your final chance at BTB Fantasy Football glory, as the contest will conclude with the end of the regular season. So get your picks in right now. Don't wait, don't procrastinate and don't pretend like you've got something better to do.

And if you haven't joined the game, it's high time that you did. There is no easier fantasy football game around, and the best part is that even in the final week of the contest, there's new lineups for everybody and everybody starts from scratch again.

Last week, 88 BTB members took part in our BTB Pick 6 Football game, the highest total since Week 8 and BTB-member nineinchnate walked away with the win by fielding a team essentially made up of Tony Romo and Dez Bryant. Congratulations on the win, nate.

The challenge of beating a frontpage writer was a little harder than usual last week. Dave Halprin finished 10th, Archie Barberio came in 18th while Coty Saxman and I finished 50th and 70th respectively.

If there ever was a time to join the contest, now is the time. Simply pick six different players (QB, RB, WR, TE, K, Wildcard) with a capped fantasy budget. You can pick anyone you want as long as you stay within your budget. Click on the banner below to submit your pick, and get it done right away. There's nothing more important right now than getting your fantasy picks in.