Against the New Orleans Saints, Dez Bryant had career-high 224 receiving yards. We take a closer look at Bryant's first 58-yard touchdown and how quarterback Tony Romo trusted his wide receiver to make the play.

Dez Bryant may not have made the Pro Bowl, but right now he is playing like one of the best wide receivers in the NFL. Dez is finally putting it all together, and that is something that the front office must feel really good about. His combination of strength, power and speed have always made him dangerous, but his understanding of route running has elevated his game to another level.

Earlier in the season, we also saw Bryant suffer some drops. That was concerning because Dez has never had issues with catching the football. Over the years, I've watched a lot of college wide receivers, and Bryant had the best hands I've ever seen. The drops that plagued him earlier in the season have finally disappeared. If he drops the occasional pass, it may be due to the fact that he's playing with a broken index finger.

Against the New Orleans Saints, Bryant had another dominating performance that highlighted all of his attributes as a wide receiver. On Bryant's first 58-yard touchdown, the trust between quarterback and wide receiver was in full display. Tony Romo simply trusted Bryant to go up and catch the football, and that's exactly what Dez did.

Let's take a closer look at that play. 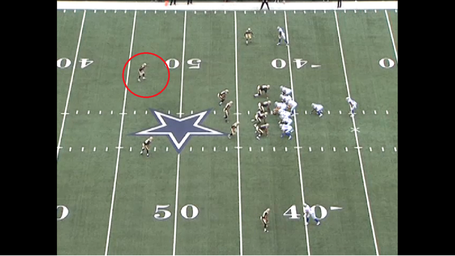 In a previous film session, we highlighted that DeMarco Murray's return has opened up the passing game. The return of Murray has allowed Jason Garrett to open up and actually use the play-action pass in his favor. Before Murray returned, opposing defenses probably snickered at the fact that the Cowboys were actually attempting to run a play-action pass.

With Murray actually running the football with success, Garrett's "21 personnel" (2 RB, 1 TE, 2 WR) has come back to relevancy because of the dual-threat that package offers.

Murray ran the ball so well in the first half that Steve Spagnuolo had to get aggressive with his safeties and linebackers. He brings Roman Harper up on a safety blitz, but later in the play we will see that was a big mistake by the defensive coordinator. 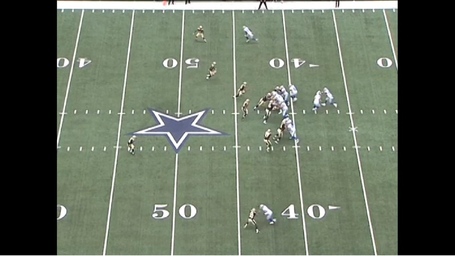 Harper has committed to coming on a blitz or offering support against the run. Dez Bryant runs a fly route on Patrick Robinson, while Miles Austin works the other side of the field. Romo runs the play-action fake to Murray and Jason Witten stays in to block on the left side of Tyron Smith. 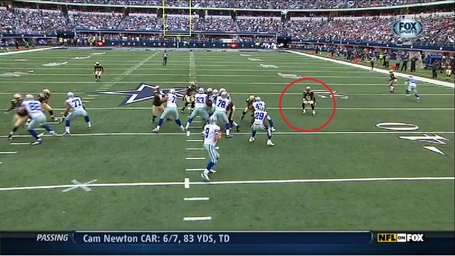 Immediately after the fake, Romo surveys the field. Like any good quarterback, Romo is going through his reads and deciding where to throw the football. Romo looks off Bryant and scans the left side of the field, but he knows that he is going to go with Bryant on the fly route. Roman Harper is caught here and he knows it. He wants to stop and run back into coverage, but it doesn't matter what he does now because he is completely out of the play.

Take notice of the protection that Romo gets here. Lawrence Vickers engages Jonathan Vilma and completely erases any threat of the blitz. Murray runs through his fake and is ready to play his role in pass protection. Jeremy Parnell does a really good job of eliminating Cameron Jordan. Even Ryan Cook and Mackenzy Bernadeau do a great job of squaring up on the interior defensive lineman. 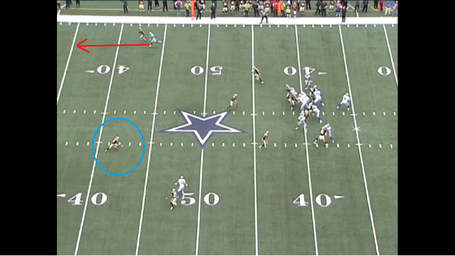 Romo begins to release the ball while Bryant is running in full stride. Robinson backed off the line of scrimmage at the last minute and has a step on Bryant in coverage. Safety Isa Abdul-Quddus comes up to take on Austin, who is working towards the middle of the field.

Abdul-Quddus is doing his job, so Robinson is on his own here. 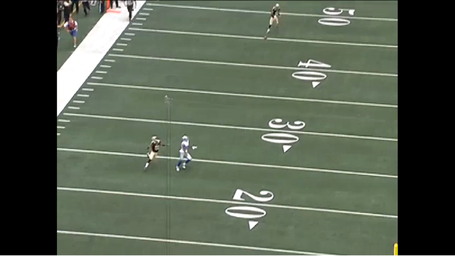 On this screenshot, Bryant begins to square up and time his jump. He knows exactly when it's time to go up and get the ball.

This throw is all about trust. Romo trusts that Bryant is going to go up and take the football away from Robinson. Dez is one of the best in the NFL at timing his jump perfectly. Over the course of his career, we've watched him jump up and take the ball away from cornerbacks and safeties. Frankly, the Cowboys need to put the ball up in the air more often and allow Dez a chance to make a big play. 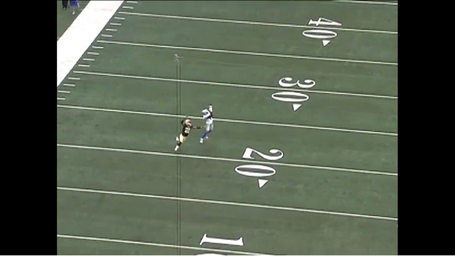 Even with a broken index finger, Dez has no problem going up and securing the catch. Robinson never had a chance on this play. At worst, this play is an incompletion that scares the defense. It's a great play to run when you get man-to-man coverage with no safety over the top. This play right here is the worst nightmare for a defensive coordinator.

Bryant secures the catch and strolls into the end zone. If you watch this play again, take notice in how Robinson runs right by and allows Dez to walk in for the touchdown. 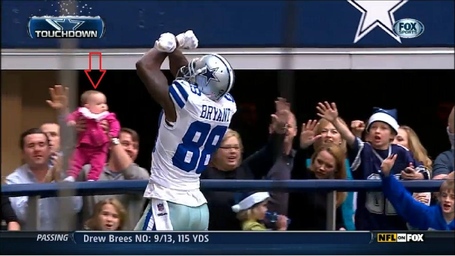 Once Dez gets into the end zone, he does his patented "x-factor" touchdown celebration. Fans really get worked up over this celebration. As you can see by my arrow, this excited fan is holding up his baby while Bryant throws up the x-factor. The baby appears to show no emotion whatsoever, hopefully he isn't a Washington Redskins fan.

We can learn a lot from this play, but perhaps the best part is watching the trust grow between Romo and Bryant. Later this week I will breakdown Bryant's other 58-yard touchdown. On that play, we will get to see how much of an athlete Bryant is.