In my second film session post, I wanted to highlight Dez Bryant's second 58-yard touchdown reception. On the previous touchdown, we saw quarterback Tony Romo display his trust in Bryant. Dez made a fantastic play on his first touchdown, but on this touchdown he gives you a taste of his power and speed.

Players like Bryant don't come along very often. Bryant is such a gifted athlete that he can use his athleticism to completely dominate the competition. Now that he is beginning to learn how to run routes, Dez can combine his athleticism with football intelligence. If he continues to perfect his craft, then he is going to be a nightmare for defensive coordinators.

Let's take a closer look at the play. 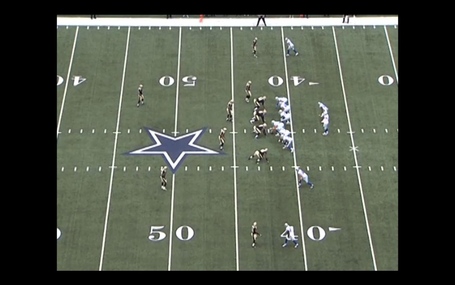 On this play, Jason Garrett gets back to one of his more creative packages. Dez Bryant and Miles Austin are lined up wide, while John Phillips is lined up in the slot. Jason Witten is lined up next to Doug Free. DeMarco Murray is in the backfield because he is great in pass protection.

In theory, the "S-12" (1 RB, 2 TE, 2 WR) package should create mismatches because it spreads the defense and opens up the field. This formation also can be deadly when you have a running back like DeMarco Murray who can do some damage without a lead blocker.

The New Orleans Saints basically operate out of their basic 4-3 defense. While what the Saints ran was pretty simple, they did get a little aggressive. Later in the play, I will show why the aggressiveness didn't work to defensive coordinator Steve Spagnuolo's favor. 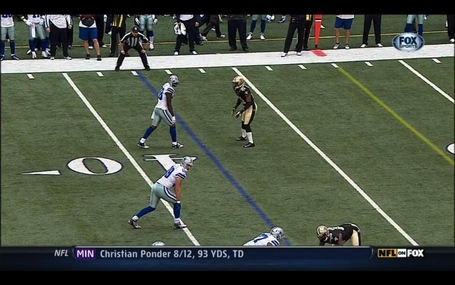 Patrick Robinson had a long afternoon. He was the New Orleans cornerback who was given the difficult task of attempting to cover Dez Bryant. On this play, Robinson is once again in man-to-man coverage. 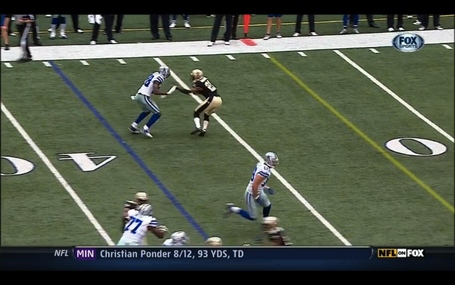 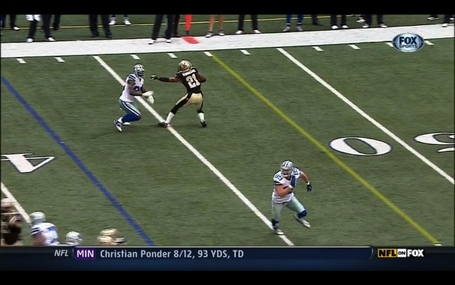 Dez does his little double move and executes it perfectly. Bryant and Robinson get physical and they end up locking their hands onto each other. Bryant shrugs Robinson's hands off and begins to take his route inside. 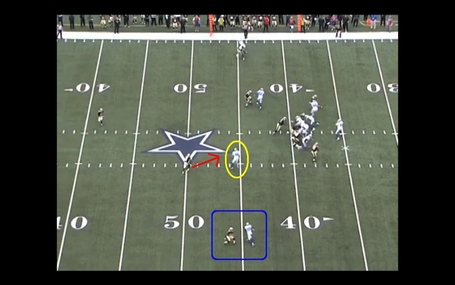 As you can see, the man-to-man coverage by the Saints is a disaster waiting to happen. Roman Harper doesn't stay over the top because he has to pick up Phillips who is running the route towards the middle of the field. With no safety help, Robinson is left on an island and he doesn't hold up in coverage.

The Saints also blitzed all of their linebackers, but they did drop Cameron Jordan into coverage on Witten. Romo is going through his reads. He does see Phillips for a safe gain, but he opts to throw to Bryant for the big play. 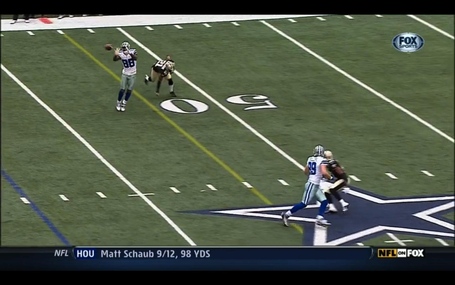 Romo throws a perfect pass and after catching it, Dez immediately turns and bursts up the field. His acceleration here is just amazing to watch. You can see here that Robinson trips and falls right before Dez makes the reception. Now Robinson is going to be in a bad position to make a tackle and prevent this from turning into a big play. 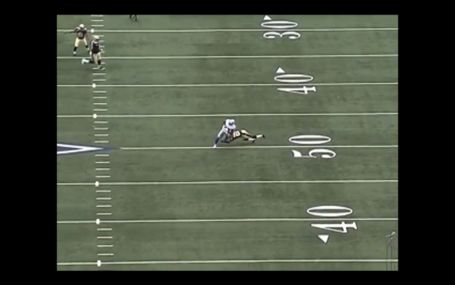 Robinson does his best, but Dez shakes him off and begins his journey to the end zone. 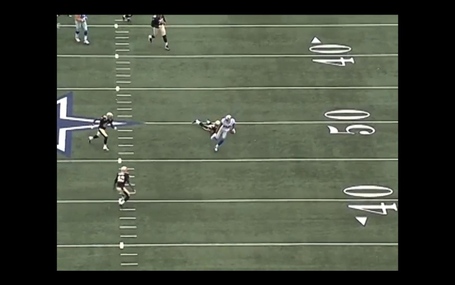 Both safeties recover and make their attempt to get over to the sideline and stop Bryant for a big gain. Dez immediately takes notice of his surroundings and knows that he must continue to get towards the sideline. After all, the sideline is a wide receiver's best friend. 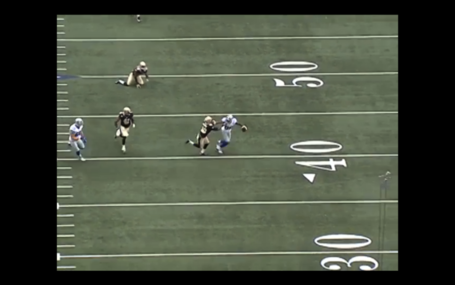 Isa Abdul-Quddus attempts to tackle Bryant, but he takes a brutal stiff-arm and falls to the ground. Dez is very dangerous in the open field because he can break tackles and then use his speed to make a big play. Roman Harper doesn't have the speed anymore to catch up, but I doubt that even a fast safety would have run Dez down. Bryant gained too much separation and had a lot of open field ahead of him.

I know that some were concerned about Bryant holding onto the ball with one hand, but we really shouldn't worry about that. He knows that there is nobody near him to force that ball out of his hands. When you can palm a football like that, you better have a strong grip, and Bryant has a extremely strong grip on the football here.

Putting the ball into one hand also allowed him to make the stiff-arm on the safety. Now, he could have tucked it in and still made the stiff-arm, but I can't nitpick Bryant for this. 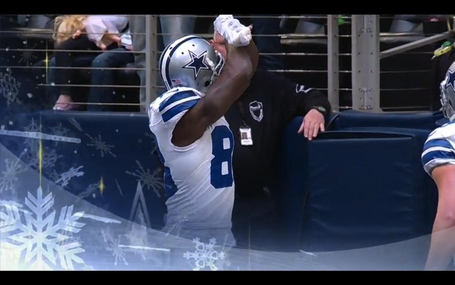 With John Phillips looking on, Dez jogs the rest of the way and once he reaches the end zone he throws up his "x-factor" celebration. This play was very reminiscent of what Terrell Owens used to do in Dallas. He would catch a slant and take it to the house for a touchdown. Freak athletes like Bryant and Owens can make these plays look easy, but in reality they are very hard to do.

In 2012, Bryant has enjoyed a breakout season. He has set career-highs in nearly every category, but he has earned the trust of his quarterback and is beginning to become a professional football player. It's scary to think about, but this is only the beginning from the new #88.