The Importance Of DeMarco Murray For The Cowboys

The Dallas Cowboys have lost many players to injury this season. While the "next man up" is the way things are supposed to work, the reality is that some players have bigger impact than others. DeMarco Murray is one of those players, and his return to the field was crucial in Dallas' 38-33 victory over the Philadelphia Eagles.

Share All sharing options for: The Importance Of DeMarco Murray For The Cowboys

How big was DeMarco Murray's role in the Dallas Cowboys' win over the Philadelphia Eagles? Well, one touchdown would almost certainly not have happened if he had not been active. But on this particular play, he made it work even though he was standing on the sidelines.

I'll explain that a little further down, but let me set the stage a bit. Coming into the Eagles game, the Cowboys were last in rushing. Dead last. In the preceding game against the Redskins, they only had 35 yards rushing. That is what they mean when they say a team is one dimensional. When you can do nothing on the ground, you have to pass. And when the opposing defense knows this, it is a lot easier to defend you.

This can largely be attributed to the loss of Murray, coupled with the knee problems for his backup, Felix Jones. While Murray was recovering from his foot injury, the team just became more and more impotent in the running game.

Given the precarious nature of Dallas' post-season hopes, his return to the lineup was just in time. While 83 yards running for the game may not seem all that impressive, the important thing is that some of his runs were very effective. On the opening possession alone, he had runs of 14 and 8 yards. In the drive to start the second half, he had a 13 yard and a 27 yard run. Felix Jones chipped in a 7 yard tote. For the first time since Murray went out, the opponent had to account for the running back. They could no longer drop into coverage with the confidence that the defensive line would be able to stuff the run.

That was the sequence of events that set up the Cowboys drive that would span the end of the third and beginning of the fourth quarter. Murray was still a key part of the drive, including the challenged-and-overturned fourth and one play that kept things alive just before the change of the period. The offense then took a couple of more plays after that nerve-wracking review to work the ball to the Eagles' 27. And then, even with Jones spelling Murray, you could clearly see how the reemergence of the Cowboys ground attack was on the minds of the Philadelphia defense.

It started with some truly beautiful ball-handling by Tony Romo. He has often been compared around here with Houdini for his amazing ability to escape things, but on this play he was a little more Criss Angel, putting some mind freak on the Eagles. 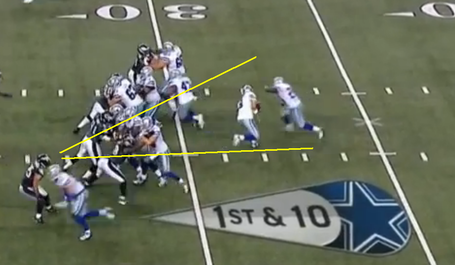 Here, just after the snap, you can see Romo extending the ball towards Jones. Note how the linebacker is watching intently. Romo and Jones carry out the fake beautifully. 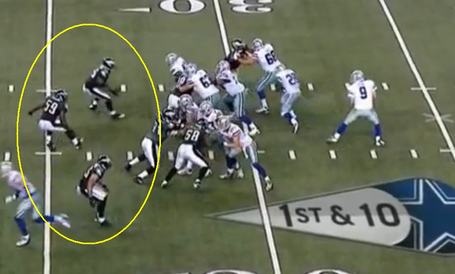 Look how the Eagles' linebackers are sucked into the line. They have been giving up yardage to Murray and Jones all day. This is a first down play, right after a pass completion, so it is a logical time to see a run. Seven defenders are caught up trying to stop Jones. But he does not have the ball, and Romo has spotted Miles Austin in the open space created by the linebackers coming up. 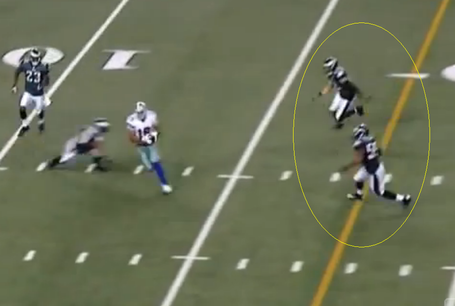 This is just a moment after the pass is completed. The two circled players were in the previous shot, just realizing that they had been snookered - and were out of place to defend the completion. Austin was wide open, and would just run past the defensive backs on the way to his touchdown.

A week or two ago, this play would likely not have succeeded. No one was respecting the run. All the teams were dropping seven and eight defenders to take away the receivers, unless they blitzed a couple to pressure Romo. Suddenly, with the return of Murray, the running game was back in play. With the team lined up in what looked like a running set, they were able to suck the defense to the line of scrimmage, create a lot of empty space for Austin to work in, and make scoring the touchdown look very, very easy.

All because Murray was back. He may not have been on the field for this play, which was executed beautifully by the players who were. But he was the one player who deserves most of the credit for making it possible. Three quarters of hard, successful running was in Philadelphia's collective head. It made this work.