The division title in the East looks to be up for grabs and two wildcard spots are also still open. Seven contenders are battling for those spots, and we look at where each of them is ranked in our summary of power rankings heading into week 14.

The playoff race in the NFC just got a lot tougher heading into week 14. The Giants suddenly find themselves on shaky ground as their lead in the NFC East dwindles to just one game over the Cowboys and Redskins. The Cowboys, Redskins, and Seahawks all won their games and improved their playoff chances while other contenders like the Bears, Bucs and Vikings all lost ground last week.

With the division title up for grabs in the East, and two wildcard spots left, which of the seven contenders have the best chance at postseason spots?

Perhaps we'll find out in this week's power rankings, where we review what's being written about the Cowboys and where those NFC playoff contenders are ranked.

NFL.com expert rankings: 15th. Elliott Harrison ranks the Cowboys 16th and provides the blurb: "At 6-6, Dallas sits behind the equally .500 Bucs because of injuries on defense. The depleted unit is getting out-gameplanned, outperformed, and frankly, dismantled with Ernie Sims and Dan Connor starting at inside linebacker. Sims was probably hanging out at Medieval Times when the Cowboys signed him off the street. Former Panther Dan Connor can't get off a block but makes up for it by being slow to the ball carrier. All that means is Tony Romo must put up more second halves like he did Sunday night: 10-for-10, 169 yards and three touchdowns."

Newsday.com: 15th (16th). "Tony Romo surpasses Troy Aikman in career touchdowns as the Cowboys hang on against Philly and keep their playoff hopes alive. Soft schedule down the stretch works in their favor. "

CBSsports.com: 16th (18th). "Their playoff hopes might be on the line this week in Cincinnati. That defense remains a major problem."

ESPN: 16th (19th). "They can look better than you think or worse than you can imagine, often within the same game. The end result is that they're average. (Graziano)"

WEII.com: 17th (17th). "The return of DeMarco Murray helped the Dallas offense tremendously. The Cowboys now have their run game back to provide balance to the offense and that allows Tony Romo to be a more efficient quarterback."

reddit.com: 17th (19th). "Inconsistency is once again established as the signature trait for the Garrett era Cowboys. A sandlot-pick-up team, outfitted in Eagles jerseys, embarrassed the team in the first half, only to convincingly outplay them in the second. A playoff berth will require perfection for the remaining four games. There will be no room for inconsistency."

Fox Sports: 18th (18th). "Ladies and gentlemen, please keep your hands and feet inside the car for the duration of this roller-coaster ride."

BeatGraphs.com: 10th. BeatGraphs provide rankings that cannot be defeated by a chain of A beat B beat C scenarios. In the end, when all ambiguity is removed, if A has beaten B, A will be ranked above B. Here's a sampling of their fine handywork: 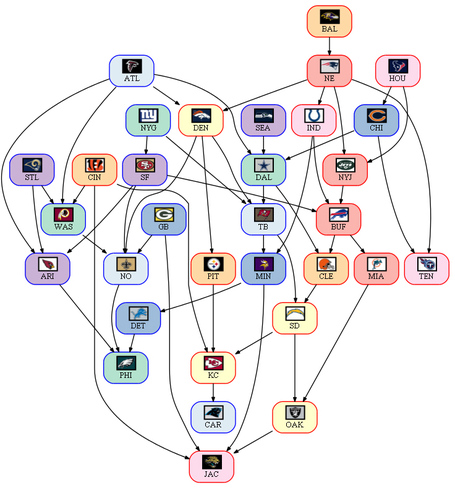 This is just one of the many cool graphs they produce, and not just for the NFL, so go pay them a visit.

Massey-Peabody: 13th (13th). These guys generate their predictions by working up from play-by-play data to calculate a performance figure for rushing, passing, scoring and play success.

Oddsshark: 14th (13th). Oddsshark use a multitude of stats to establish an offensive and defensive power ranking, which they then adjust for the strength of schedule.

WhatIFsports: 16th (16th). These guys simulate every possible match-up in the NFL 100 times, and use the winning percentages from those nearly 50,000 games to evaluate every team, with updated rosters and depth charts.

Teamrankings.com: 22nd (18th). This site measures the relative strength of all teams using team performance, home/away status, margin of victory and other factors.

Below is how the seven teams currently competing for the NFC wildcard spots fared in this week's power rankings.