Don't forget to set your lineup for the weekly SB Nation Fantasy Football Pick 6 game before the Denver Broncos kick the crap out of the Oakland Raiders on Thursday night.

Share All sharing options for: Pick 6 Fantasy Football On BTB - Don't Be A Chicken And Set Your Lineup Right Now 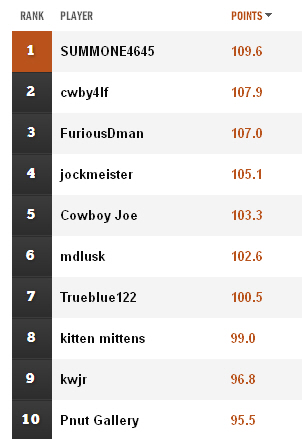 I don't know what's keeping so many of you from joining this great little game we have going here on BTB.

There's no easier way to have a little fantasy football fun than to pick six players for your fantasy team in a couple of minutes. Just go to the Pick 6 Football site and pick the players to match a fixed budget. Then check in next week to see how you did. contest. That's it. No obligations, no hidden fees, no sign-up required, nothing.

69 BTB members participated in last week's contest, and Summone4645 took the crown with a team featuring Cam Newton, Dez Bryant and Bryce Brown. Summone continues our proud tradition here on BTB of having our winners rank in the top ten in the entire SB Nation network by finishing fourth overall. He's joined in the top ten by fellow BTB'ers cwby4lf and FuriousDman. Congratulations to all of you.

For the frontpage writers, week 13 was a mixed bag of goodies. Archie Barberio finished 16th, closely followed by Dave Halprin at 23rd. I left a generous gap and finished 53rd. I suspected KD would finish somwhere below me, but it turns out he wasn't able to participate this week.

Don't be a chicken. Click on the banner below to submit your pick, and get it done before week 14 kicks of on Thursday night.

In fact, get it done right now. Or are you chickening out again?

Here are my picks for Week 14: