Tony Romo moved past Troy Aikman into the record books when he connected with Dez Bryant on a 23-yard touchdown pass. Let's take a closer look at how Romo set a Cowboys record when he threw his 166th passing touchdown.

I am going to keep the film session short and simple this week. There were plenty of plays up for closer analysis this week, but I only chose to break down one play this week. When Tony Romo walked onto the field last Sunday night, he knew that he could move into the record books as the team's all-time leader in touchdown passes. Romo now sits ahead of Don Meredith, Roger Staubach, Danny White and Troy Aikman as the franchise leader in touchdown passes.

In my game balls post, I said that we should take a moment to really be thankful that Romo is the starting quarterback for the Dallas Cowboys. If you take a quick glance around the NFL, there are some teams who are desperate for a good quarterback. Romo isn't perfect, but what quarterback or person is? When Romo brings it, he looks like a great quarterback who is always a threat for the big play. 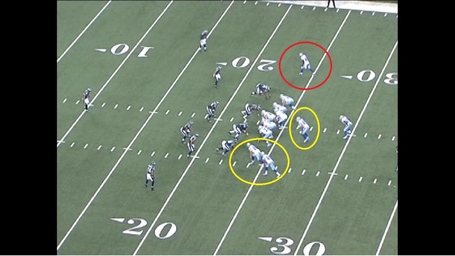 The first thing that jumps out this play is the formation that Jason Garrett employs. Garrett is obviously a firm believer in using multiple tight ends. Not only does Garrett like to run out of this formation, he loves to dial it up and throw the football down the field with multiple tight ends.

Jason Witten motions into the backfield while James Hanna and John Phillips are split to the left. Dez Bryant is the only wide receiver on the field. 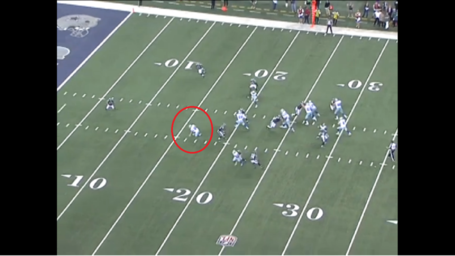 Romo can be very good at reading the defense and diagnosing what coverage they are in. When Romo makes the correct read, he is nearly unstoppable. In his post-game press conference on NBC, Romo mentioned that he managed to go 10-10 because he was able to figure out what the Eagles were running defensively.

Immediately after Ryan Cook snaps the ball, Romo finds the hole in the Eagles zone with John Phillips running free into the Philadelphia secondary. Phillips cannot run a clean route and falls flat on his face. Had Phillips managed to not fall, he would probably have scored a historic touchdown or at least got the ball closer to the end zone. 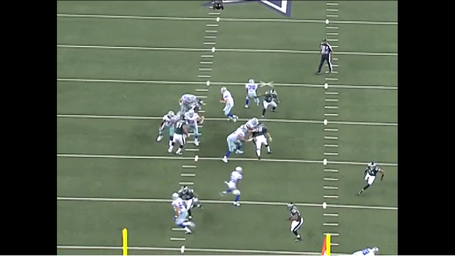 Romo must scramble now because he is at the end of his drop and still has not gotten rid of the football. The protection wasn't bad here, but the offensive line cannot hold the pocket forever. This is where Romo becomes very dangerous. 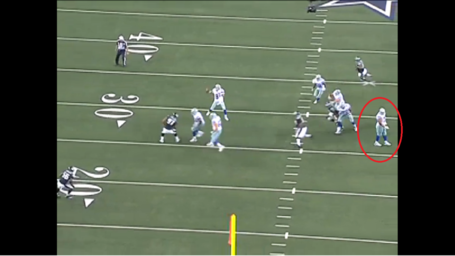 By scrambling outside of the pocket, Romo extends the play long enough for his new weapon to get open. Dez Bryant has run all the way to the other side of the field, but Bryant sees that Romo is on the move. Bryant is still getting a feel for how to adjust his route, but he is really beginning to get a lot better at it.

The effort by Nate Livings on this play really gets to me. Once his man beats him, he straight gives up on the play and becomes a spectator. That's okay to do when you are Jason Witten and are 30 yards down the field, but Livings is an offensive lineman in the thick of the battle. He may not be able to make another block, but at least try to look motivated. I don't know if this is the type of things that Garrett goes back and looks for on tape, but I really hope offensive line coach Bill Callahan does. 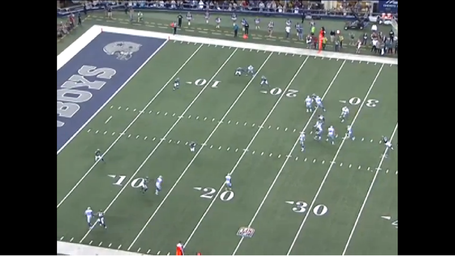 Look at all of the room Dez has to operate with. Once he secures the catch before looking up the field, Dez will have plenty of room to make a big play. 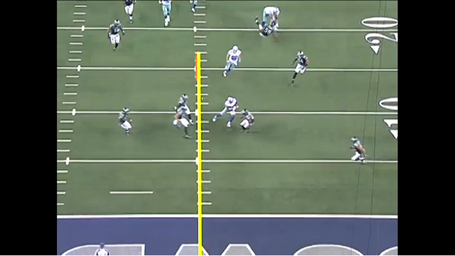 Dez makes the catch and he makes his first move count. Using his acceleration and burst, Dez easily makes his way down to the 10 yard line. There are four defenders waiting to crush him, but none of them make contact because of Bryant's athleticism and footwork in the open field. 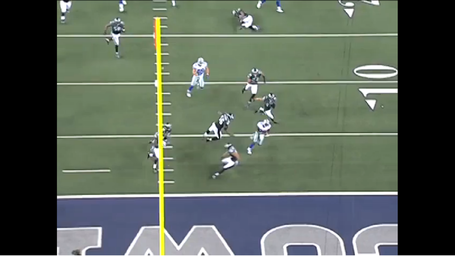 Kudos to Eagles rookie linebacker Mychal Kendricks. He shows tremendous hustle coming out of nowhere to make an attempt to take Dez down before he scores, but Dez makes a quick juke and Kendricks outruns the play. 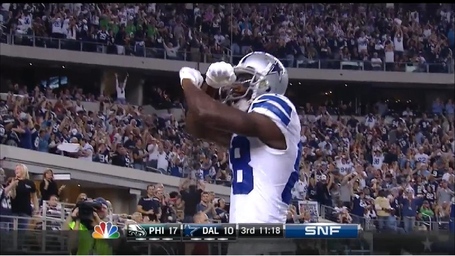 There you have it. Romo breaks the franchise record for passing touchdowns and Dez throws up his patented touchdown celebration. The original play wasn't executed, but the results are positive because of Romo's ability to extend plays and Bryant's athleticism.