The Cowboys face the Bengals on Sunday, and both teams need to win to remain in contention for a playoff spot. Elsewhere in the NFC East, the Giants and Redskins are also calculating playoff probabilities, while the Eagles are talking about their odds of getting the number one draft pick.

Only four games remain to decide who advances to the 2012 NFL playoffs. And which teams will make it is anybody's guess, as only four teams so far have mathematically been eliminated from contention for a trip to Super Bowl XLVII.

Pending the various possible game outcomes this week, the NFC East teams could see a significant change in their odds of making the playoffs - in both directions.

There are countless possibly ways of calculating playoff odds, but the one thing they all have in common is they all make assumptions about how the final four games will play out. And because these assumptions differ from one method to the next, the playoff odds for every team will differ, depending on which method you're looking at. To illustrate the point, here are the current playoff odds for the NFC East teams as calculated by three different methods:

If the season were to end today, the Giants would take the division title and the Redskins would own the head-to-head tiebreaker over the Cowboys, but would still miss out on a wildcard spot to the Seahawks. The Cowboys would not get a wildcard spot and the Eagles would at least get to keep their Lords-Of-No-Rings title for a while longer.

But all of that could change tomorrow. NFL-Forecast.com has a nifty little tool that allows you to calculate playoff probabilities by simulating different game outcomes. Their base probabilities for all teams are based on the team efficiency ratings at AdvancedNFLStats, so they are pretty robust. The tool allows us to calculate the change in playoff probabilities for each NFC East team based on the expected outcome of Sunday's games. Here's what that could look like:

Intuitively, those playoff odds look about like what you probably expected. A Giants win against the Saints would solidify their hold on the division, a loss would put everything up for grabs. The Redskins and Cowboys needs to win to retain any chance of making the playoffs. But what if the Giants win and the Redskins lose, where would that put the Cowboys? Or if both the Giants and Redskins were to lose, how would that impact the Cowboys chances?

The following chart summarizes the Cowboys' playoff chances based on the outcomes of the three games in which the three relevant NFC East teams play on Sunday: 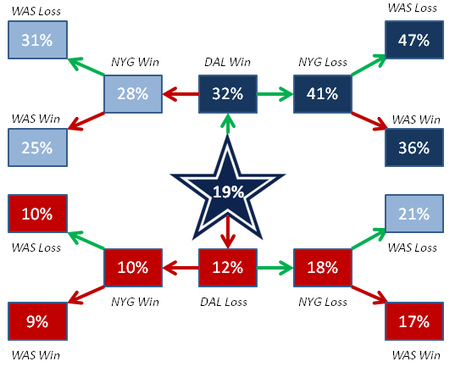 The Cowboys need to win tomorrow. End of discussion.