2012 NFL Scouting Combine Primer: The History And The Preliminaries

Share All sharing options for: 2012 NFL Scouting Combine Primer: The History And The Preliminaries

Dateline, Indianapolis. We are less than 24 hours away from the first arrivals to the 2012 NFL Scouting Combine. The annual ritual, also known as the Underwear Olympics officially kicks off tomorrow, with special teams prospects, tight ends, and most importantly to the Dallas Cowboys, the offensive linemen all reporting for registration. There won't be much action until the weekend, as the draft hopefuls will spend the day doing paperwork and attending orientation; but it will mark the official beginning of the 2012 league year.

Sure, free agency doesn't start until March 13th, but this is the first tangible, substantial piece of new information that we've had since the season turned cold on us early last month. We get to take a look at all of those prospects we've been reading up on and watching highlight reels of.

For those that have only paid slight attention to the combine in year's past, here is how it works.

Each year, the NFL invites every eligible draft prospect that one of their many committees feels has a chance to be drafted in one of the seven rounds or a hot target undrafted free agent (UDFA). In 2012, the number of invitees reached 328, and you can look at the full list, here. They weigh and measure all and see which ones have been found wanting and which ones project to exceed their collegiate production based on athletic abilities, sans pads.

The Combine separates the invitees into 11 groupings, by position, and then runs each group through a four-day process that peaks on the final day with what actually gets all the press and attention, Workout Day. So for all intents and purposes, even though the combine starts tomorrow, the weekend is when things will really get interesting.

Follow the jump to see the position groups, day assignments and more. 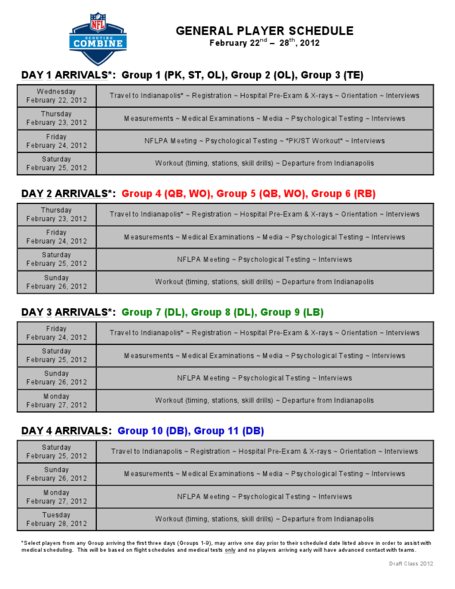 Here's a look at the drills that the players will partake in:

Last year, I included a bit of the history of the combine in the kickoff primer that I found interesting and figured it was worth rehashing considering how much of a grand spectacle this has all become. It certainly started from meek beginnings; a handful of teams pooling their resources.

In 1963, Lesto scouting combine, became the first NFL organized scouting combine in football history. It consisted of three clubs (the Lions, Eagles and Steelers), with the final two letters standing for Talent and Organization. In 1964, the Chicago Bears joined the group, thus creating the name that forty-five years later still remains intact for the past 45 years.

The Cowboys, Rams and 49ers organized Troika combine in 64 and when the Saints joined the group, the name was again changed to Quadra. Baltimore Cleveland Green Bay and the St. Louis Cardinals formed CEPO and after they were joined by the Giants, Falcons and Redskins, the formed United Scouting.

Check out the link to Scout.com above, it's a great read on the history of NFL scouting.