Share All sharing options for: Cowboys Defense: 3-4 Or 4-3, Does It Really Matter?

As the combine results pour in, the biggest surprise thus far has been the seeming wealth of pass-rushing Defensive Ends. What was originally deemed a shallow class is now shaping up to be a collection of premier numbers, coupled with scarce weaknesses (Bruce Irvin's 33.5" Vertical, for example). The Cowboys are in the market for a pass-rusher, with Anthony Spencer becoming a free agent in a matter of weeks. (Even if they aim to re-sign him, he's a part of the market.)

As we all know, position transitions for draftees are risky propositions. DeMarcus Ware, Anthony Spencer, and Victor Butler all came out of college as Defensive Ends. They've all transitioned fairly well to Outside Linebacker. Nonetheless, one must be aware of cases like Vernon Gholston, who came out posting monster numbers, only to fail in the Jets 3-4 system, and the NFL in general.

Besides pass-rushing linebackers, the 3-4 also requires another unique skill set: the Nose Tackle. Nowhere else in football exists a need for the sheer size, strength, and explosiveness you want at Nose Tackle. In fact, the number of true, athletic Nose Tackles in the league is staggeringly low. Most teams either plug in an athletic 3-technique type (a la Ratliff) or an immobile mass that won't push the pocket, but won't be pushed backwards, either (Paul Soliai comes to mind).

It seems that even elite athletic prospects at Nose Tackle are hit-or-miss propositions. The shortage of personnel entering the league as Nose Tackles and rush Linebackers has led many to believe that the Cowboys are best suited to move back to a 4-3. Should they? Does it even matter? 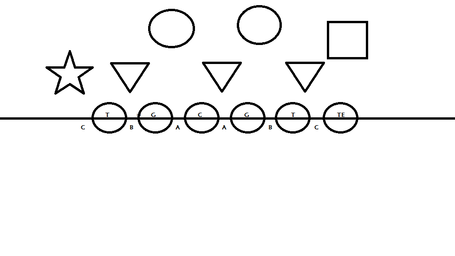 I offer the Cowboys’ 3-4, for your examination. And, for comparison (from a few years back) the Giants’ 4-3 Under, sourced from gbmwolverine.com. (Why a Michigan site is using old Giants personnel...well, I don't think this is their own work. Check out the link, though, for a refresher on defensive assignments) 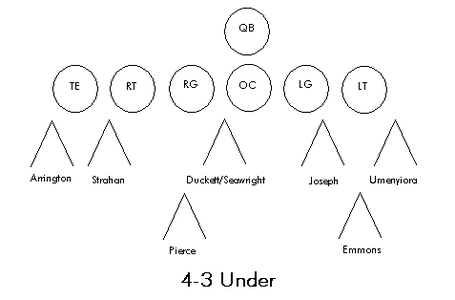 The only difference is the position of the SOLB. In our case, he plays off the line. Ironically, in the 4-3, he’s playing on the line. Let’s examine the differences. In our case, our best pass rusher is one-on-one with the left tackle. The same could be said for the 4-3 Under. Following that, we have a DE playing the 3-tech, a DT playing 1-tech, and a DE playing 5-tech. Compare this with the Giants playing a DT at 3-tech, another DT at 1-tech, and a DE at 5-tech. Outside of the DE, the SOLB is playing the 9. While I can’t speak for Arrington’s speed, I doubt that a 4-3 OLB is going to effectively rush the edge, around an edge rusher, and get to the quarterback. His responsibility is to chip the TE and play the flats/pitch to the outside.

The two fronts are nearly identical, with the exception being versatility. In the 4-3 front, only the WDE is an immediate threat to the QB as a pass rusher. The SDE is fighting through traffic to get to his own edge. The 4-3 3-tech and 1-tech are typically penetration players, and therefore will not command the double teams that are expected from 3-4 linemen. The two linebackers are a Middle Linebacker and WOLB. In the 4-3, the weak OLB specializes in outside containment and coverage.

The 3-4 scheme places their two best pass-rushers on the outside, with no obstructions. All three interior linemen are large enough to command double teams, and the MLBs are both flexible coverage/run stuffing types.

This is a trend that you’ll see consistently if you examine defensive schemes. 4-3 personnel tend to force the hand of the coordinator, as the players are very specialized in what they do. The flexible players that find themselves in 4-3 schemes are at a disadvantage; they can rarely afford to change their assignments (the commitment to which 4 players are rushing limits the possible variations). In our 3-4, we have the ability to send Ware or Spencer from the edge. Or both, or neither, as neither is lost in coverage. Both inside linebackers are effective coverage players and sure tacklers (Lee and Carter), leaving a myriad of possible rush combinations from just this one alignment. 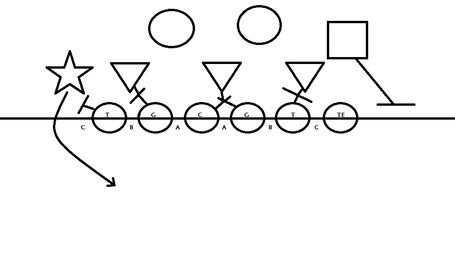 This has been our "base" attack for the past few years. DeMarcus Ware (guess which one) rushes the edge consistently. Kenyon Coleman drives the Guard back, watching the B Gap. Ratliff attacks the Strong Guard and Center, drawing a double team. Spears attacks the Right Tackle, trying to disrupt the off-tackle run. Spencer sets the edge against the Tight End, watching for outside running plays, releasing running backs, and the Tight End in the flat. Only the weak side A Gap and strong side B Gap are left unfilled, with Lee and Carter ready to fill them if necessary.

Compare that with the "Wide 9" look that some (who covet sacks) would prefer. 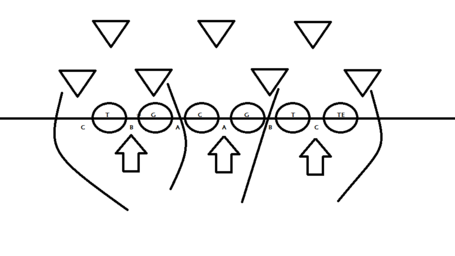 The 4 linemen rush their gaps, without exception. Defensive Ends around the edges (even outside the TEs), Defensive Tackles splitting gaps, and veritable highways open for a smart running back. Those three arrows represent possible trajectories for ToMarco Fiammurray, or any other decent FB/RB tandem. The Wide 9 forces Linebackers to play back on their heels. Committing at the snap would result in the open hole being immediately visible to the offensive backfield. Now imagine a zone draw with crossing routes to pull the Linebackers deeper-the Linemen will have chosen their attacking gaps, and, if the hand-off is made before the Defensive Ends get there, you've found yourself a staple play. Against a 3-4, you have no staple play, because the 3-4 defenses can attack from any position due to the requisite versatility of their players.

Bill Belichick, a man familiar with football, had this to say about defensive alignments:

"Honestly, most people thought we played a 4-3 at the Giants. Lawrence Taylor did a lot more rushing than he did pass-dropping; probably 80-90 percent of the time he was the rusher in the defense," Belichick said.

"It wasn't always a pass, but certainly in passing situations and a lot of pass plays, he was the designated fourth rusher, which really put us in what amounts to a 4-3.

"Honestly, I think that's something that is a media fabrication. There are a lot of different alignments out there. You see 4-3 teams use odd spacing. You see 3-4 teams use even spacing. You have 11 players, you can put them in various positions. Whether you want to put it on the pre-game depth chart as one thing or another, I think is a little bit overrated.

"You play different fronts, you play different spacing, and you teach the techniques of your defense. That is what consistent, techniques that are taught in different defensive systems, whether those teams go from three-man line to a four-man line, or a four-man line to an odd spacing line, or overs to unders, or unders to overs, or over-wides, whatever you want to call it. They will continue to play the same fundamental techniques as they've been teaching for the entire year, for the most part. I think that's what teaching defensive fundamental football is about. It's about fundamentals. Wherever you put them, you've got to people other people in complementary places, however you decide to do that."

If you replace Lawrence Taylor with DeMarcus Ware, then it seems Bill would argue the Cowboys, too, employ a 4-3 defense. Good football coaches can find ways to use good football players; it doesn't amount to much more than that. Is the 3-4 really a problem in Dallas, or is it just another scapegoat?