Note: I'm not an expert Capologist but I have tried to keep this realistic. Forgive me if some figures aren't 100% accurate but I think, and hope, they are at least reasonable estimations.

According to league figures, the Cowboys have $12.6 million in salary-cap room based off the 2011 cap of $120.375 million, and that includes the $28 million (or so) in dead money related to guys like Roy Williams, Leonard Davis, Marc Colombo, Marion Barber, Andre Gurode and Igor Olshansky who were cut in 2011.

The $12.6 million figure does not take into account the tender amounts the Cowboys have for their exclusive rights and restricted free agents or the space needed for their draft picks, but that will not significantly impair their ability to sign players.

They have triggers in the deals of left tackle (or right tackle) Doug Free and cornerback Orlando Scandrick that would lower their base salaries to the league minimum, turn the difference into signing bonus and save them about $8.6 million. Re-working DeMarcus Ware’s contract would open up about $3.3 million.

Adding the $11.9 million in space from the re-worked contracts to the existing $12.6 million and Dallas should have around $24.5 million of room. The prediction seems to be that the 2012 Salary Cap will be $124 million (up from $120 M). That gives Dallas a further $4 million to spend taking the total to about $28.5 million. $28.5 million sounds like an awful lot but it can disappear mighty fast. About $5 million is gone immediately as it'll be put aside for Dallas' selections in the 2012 NFL Draft and some undrafted rookie free agents. Essentially there should be about $23.5 million for resigning and free agency. I'm interested in as much turnover as possible so there's only a few guys I'm really targeting for resigning. 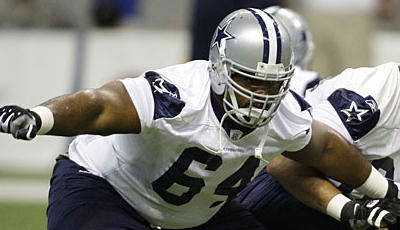 Resign: Although he played very well this year (Pro Football Focus ranked 16th overall Guard) his previous weight issues, injury history and age will prevent him from getting any major FA interest and should resign with us for cheap. 2 years, $4 Million, approximately 2 per year. 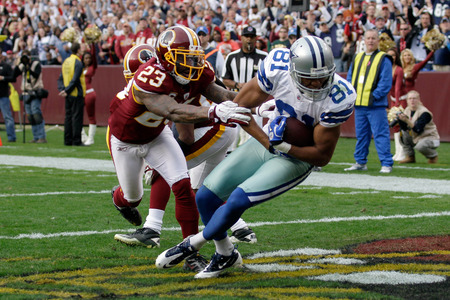 Resign: He's got size, speed, hands, the right attitude and seems to have made an instant click with Romo (PFF 27th ranked overall WR). With Miles Austin's injury history I think Robinson is a must sign for this team. 5 years, $20 Million, approx 4 per year. 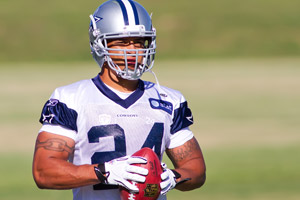 Resign: Seemed to have positive impact on ground game in 2011. Should only improve with a full offseason in Dallas. 2nd Round Tender $1.4 million. 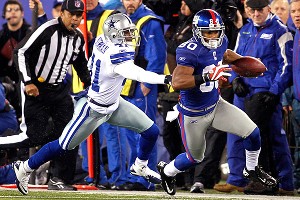 Before June 1st Cut: The Cowboys can apparently grab a $4 million dollar saving by cutting Terence Newman. Consider it done. Newman was poor in coverage and run defense (PFF rated him as one of the worst CB's in the league). With roughly $7.4 million in cap space spent on resigning Holland, Robinson and Fiametta that takes our $23.5 million in space down to $16.1 million. Adding the $4 million gained by cutting Newman takes Dallas back to $20.1 million for Free Agency.

As it’s been pointed out on this very blog, Dallas is a team with a some very high quality players but the team lacks overall talent and certainly depth. My approach to FA is not to just add another expensive star and leave the team still lacking in overall talent and depth but rather bring in as many quality starters and depth as I can. That will help our current stars shine and hopefully let home grown young guys develop into the future stars. 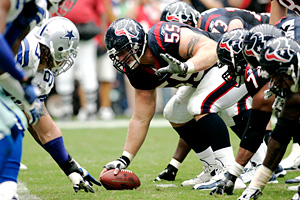 Solid pass protector and great run blocker. PFF 1st ranked Center in 2011 and 3rd in 2010. Dallas is said to be looking for Centers and this guy is the best on offer. Huge upgrade over Phil Costa. Minnesota’s top young Center John Sullivan signed a $5 year $25 million contract just a few months ago. Myers will probably get similar: 5 Years, $22 Million, approx 4.4 per year. 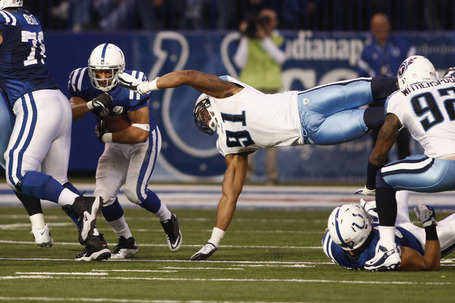 Only 25 years old and has some very good play on his resume. At 6'5" 275 has a 3-4 DE build. Was moved from DT (where he was very productive) to DE in a 4-3 in 2011 and it hurt his game and his stock. Could be a real free agent steal moving him to 3-4 DE. Has quickness and long arms to be a pass rush threat. Jones is the guy that was eating Leonard Davis alive in 2010 when Dallas pulled Davis and benched him. PFF rated him the 4th best DT in 2010 and 1st among DT's in 2010 for pass rushing (Ratliff was ranked 2nd). Should come fairly priced because of down 2011 season. Could be just as effective as the top tier big name Defensive FA's at half the price. I think the Stephen Bowen contract (5 years, $27.5 million) is a good starting point. 5 Years, $30 Million, approx $6 per year. 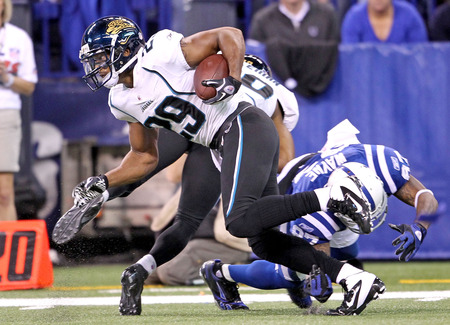 Only 25 years old. Good speed/strength 4.42 forty/21 bench. Similar career path as Orlando Scandrick: later round pick, steady nickle and fill in CB. Filled in very well for the Jaguar's this year starting 6 games. Best play is in front of him. Will be much cheaper than top tier CB's. PFF tied 7th Ranked CB in 2011 (Jenkins 40th, Scandrick 83rd, Newman 97th) and rated 2nd overall in CB run defense so there should be no "business decisions" on the field from Middleton. Can compete for starting spot, provide quality depth and act as insurance for 2013 as Mike Jenkins is in his contract year. Should sign similar contract to Scandrick. 5 years $22 million, approx 4.4 per year. 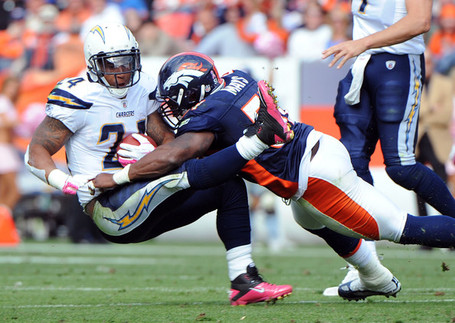 We really need a veteran ILB. Someone who, if Bruce Carter stumbles or Sean Lee gets injured, can at least play solid on first and second down. Mays is only 26 years old and is a good veteran run defender. Jerry has stated we might need a thumper in the middle and Mays (5'11" 250) is flying completely under the radar and can provide the run D. PFF rated him the 17th overall ILB (Bradie/Brooking 38th/44th) and 12th overall for his run defense. While he didn't perform great in coverage or pass rush he was not terrible either. He was simply average in both. But a very good run defender who's average in coverage and pass rush is a significant upgrade from the terrible duo of Bradie and Brooking who significantly under performed in practically every area. 4 years, $10 million, approx 2.5 per year. 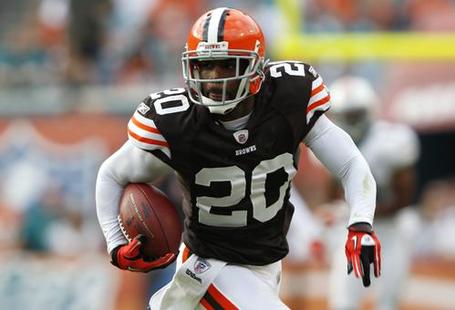 PFF 21st ranked Safety 2011 (Elam 55th, actually Adams has beaten Elam in ranking the last 3 years straight), a strong 7th in coverage (Elam 72nd), but did struggle some in run defense. Played with both our Defensive Coordinator Ryan and new Secondary Coach Jerome Henderson at the Browns. In 2009 played CB and was ranked 22nd in the league by PFF. Can play FS and send Sensabuagh to SS. Sensabuagh performed much better in 2010 as a SS than this year as a FS (2011 29th overall as FS, 2010 10th overall as a SS). This improves both FS and SS. Should be cheap. Mike Adams previous deal in 2009: 3 years, $4.1 million, $1.5 M guaranteed. Abe Elam got a 1 year $2.5 million deal. Adams could get 3 year $6 million deal, approx 2 per year.

None of these contracts are the Marion Barber ($45 M), Roy Williams ($54 M), Leonard Davis ($49 M), Ken Hamlin ($38 M), or Flozell Adams (6 years $42 M at 34 years old!!) disaster salary cap killer types. They're reasonably priced, great value if the players perform as hoped and releasable fairly quickly if they don't work out. Those 5 free agents should cost around $19.3 million in total. So out of our $20.1 million for free agency about 800k remains.

For that bargain price we're also looking at improvement at several starting spots. Myers should be a huge upgrade at Center. Jones should instantly become our best pass rushing Dlineman. Middleton will be an upgrade over Newman and Ball whether he wins the starting CB job or is just heavily involved in Nickle. Mike Adams should be an upgrade over Elam (certainly in coverage) and also allows Sensabaugh to go back to SS where he's better suited improving two spots for a bargain. Joe Mays offers a clear upgrade over the James/Brooking duo and some insurance for either an injured Lee or a struggling Carter.

There's still holes on the roster (most notably OLB) but there was always going to be more than could be filled in one off-season. Also, this off-season is far from finished, the next stage is another opportunity to add talent...

Your thoughts on the offseason unfolding this way?