During the NFC Coaches' breakfast Wednesday morning, Jason Garrett offered a reporter a rare look into his offensive philosophy. A common theme from last season was the emergence of tight end-heavy passing attacks. Rob Gronkowski and Aaron Hernandez were the talk of the league, and, because the Cowboys frequently employ two tight end sets, the topic was fair game for Garrett.

So, Jason Garrett, is there "an individual coaching philosophy," that "I'm gonna go find myself some really good young tight ends, [and] line up and play tight ends, as opposed to...three wides?"

(The following is a complete transcript of Garrett's answer, any errors or omissions, as well as emphasis and parenthetical information, are my own)

I think there are some challenges that teams who play with two tight end sets-and we've been one of those teams, with the guys that we've had, ‘cause we have some very good tight ends-you can present some challenges to an opposing defense...

Continued after the jump...

...and the simple challenge is this: if you have versatility at those positions, you can play that formation as one back, two tight ends, two receivers, and you put ‘em up in the one-back set, now if you have versatility, you can take one of those tight ends, and you can bring him back into the backfield, and play your offense as a two-back offense.

This type of versatility is something we had already seen from John Phillips in the past, although his run blocking (-4.8 on 175 run blocking snaps, per PFF) left something to be desired. Tony Fiammetta, however, only garnered a -5.3, so there's some room for discussion.

Taking one of those guys, now you have two backs, one tight end, and two receivers. And then if you have the right kind of personnel, you can take that guy, and don't put him in the backfield, don't leave him in the tight end spot, put him out here (gesturing outside the formation, as a wide receiver), and you can play your two tight end sets as a three receiver set.

This is something more exotic, that featured heavily in the New England and Green Bay offenses (which means it can't be too bad for us to implement).

This concept, of not showing your hand, is something we've talked about at length when discussing Rob Ryan. Jason Garrett, as it turns out, comes from a similar school. Unlike the Cowboys offenses of the later '90s, who lined up like they were in the Pro Bowl, Garrett aims to disguise his intentions by utilizing ambiguous personnel groupings.

So the tight end position is one that you can create different kinds of feelings for your offense, and present some problems for the defense, and have the right kind of guys. If you are, though, if you are saying this tight end is gonna play fullback, even though he's 6'6", 268 pounds (Witten is listed at 6'6", 265 pounds), can he really do that? Okay, we're gonna take this guy who's 6'6", 268 and put him out, and let him run routes on an elite corner, and can he really do that?

In this passage, Garrett appears to be talking about Jason Witten, as well as another tight end (who isn't necessarily on the roster), as players who can play fullback, tight end, and wide receiver. Although it's unlikely, Garrett may also be pointing out Witten's limitations, as his blocking declined substantially last season for unknown reasons.

You know, sometimes if you're saying you want to do that but you don't have the skill set as a player to be able to do that, you're almost creating a poor match-up for yourself. But if you have the right kind of guys, that have versatility, they can cause problems, because they have to say, "we're playing regular defense, you split ‘em out and you play it likes it's three wides," or, "we're playing nickel defense, bring him in, let's run the football." So you're really dictating it based on the guys you have.

Many have attempted to construct a sort of genealogy of Garrett's play-calling tendencies. What we can be certain of is that Garrett is, in many ways, attempting to emulate many of the policies he experienced as a part of the dynastic '90s Cowboy teams. During that time, Garrett was studying under Norv Turner, who remains a close contact to this day (which is how we were brought on to Laurent Robinson). So, who better to examine than Norv Turner when attempting to ascertain Garrett's offensive goals.

In a copy of his 1996 Washington Redskins playbook, Norv Turner says the following:

Movement is very important to our total offensive system. There are several reasons for movement in our offense; among the most prominent reasons are:

1. To create a perosnell[sic] advantage by creating coverage mismatches on our receive[sic] or backs.

2. To create a personnel advantage by effecting changes in run support and force responsibilities.

3. To create a secondary movement in an effort to better enable our quaterbacks[sic] to recognize coverages.

4. To get our personnel in better position to execute their given assignment.

5. To create problems for the defense in man under coverages when attempting to hold or bump receivers at the line of scrimmage.

6. To create an opportunity for indecision, confusion, and/or misalignment by the secondary.

7. To cause movement on the part of the defense in an effort to realign their personnel with the coverage calls and changes, and not allow them to set themselves and react to familiar offensive patterns. Make the defense play "on the move".

8. To force opponents to spend practice time and effort on adjusting to movement patterns rather than improving defensive skills and schemes.

9. To create a visual complexity to the defense, yet be able to run the same basic plays from a variety of looks.

With this in mind, it's easy to see where Garrett's coming from. The versatile tight end, known as the F Back in Turner's offense, has a very dynamic role (links to an older article of mine, where I elaborate on the position). 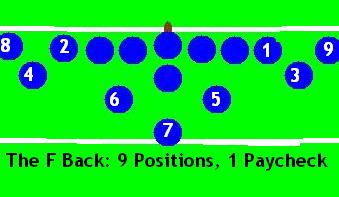 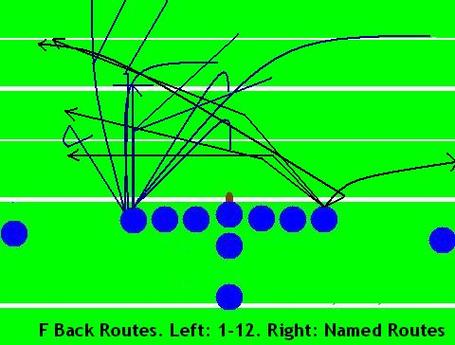 From a traditional single-back set, the F Back can line up in any one of 9 positions. From those positions, he can run a number of routes (illustrated above). This incredible dynamism prevents the defense from anticipating the offensive formation based solely on personnel groups. This is what Garrett's talking about in the interview. Not only does he want a tight end that can line up in all of these positions, but one who can line up in these positions and be effective.

With the departure of Martellus Bennett and John Phillips remaining a somewhat unproven commodity, it becomes apparent why the Cowboys were talking with free agent tight ends this offseason. The tight end position is the cornerstone of this offensive system, and it's not unlikely that we'll invest some money or a draft pick into the position in the near future.