Earlier this week, in a radio interview transcribed by the Dallas Morning News, Dallas Cowboys quarterback Tony Romo indicated that he and the 2012 Cowboys are ready to "take that next step":

Of course, that statement drew derisive and predictable sneers from fans of other teams, but Romo's statement does beg the question of how far away the Cowboys really are.

A guy marked in blue would be ranked in the top 20% of players at his position group. The size of these position groups varies of course. The wide receiver ranking has 115 players in total, so each tier or quintile would contain 23 players. 3-4 OLBs on the other hand have only 28 ranked players, so each tier would only contain five to six players.

As you review the figures and charts in the rest of this post, keep in mind that the numbers give a directional indication of how a player performed in 2011, but shouldn't be seen as the absolute truth. While I'm confident that a player marked in blue had a better year than a player marked in yellow, there is probably less of a difference between players with a value of, say, 77 and 83 than the numbers would indicate.

It's always tricky comparing rosters especially when they play different systems, like a 3-4 or 4-3. So in trying to accommodate every team in the East, I've decided to use a 28-man roster for each team. The offense is fairly straightforward: one player each at QB and FB, two players each at TE and HB, five offensive linemen and three wide receivers. In selecting the players I chose the players with the most snaps at their position in 2011. The tight ends are ranked by their receiving grade only.

On defense, I allowed nine combined defensive linemen and linebackers per team, as well as five defensive backs, three corners and two safeties (except the Giants, who have three safeties and two corners). Again, all of these players were sorted by snaps played.

Here's what the 2011 rosters for all four NFC east teams look like using the positional ranking approach:

If you have trouble displaying the full chart, you may need to change your viewing settings on BTB. You can do this on the top right of the BTB page by setting View to ‘wide’, as shown in the little graphic below: 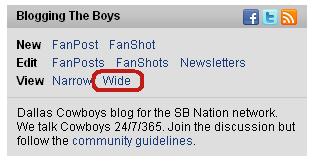 As you look at the overall color schemes across the four rosters in the table above, the clear odd man out here are the Redskins. You don't end up with a 5-11 record by accident, and the table above shows that the Redskins had way too many players playing below average last year. Because the discrepancy here is so big versus the other three teams, I'll leave the Redskins aside for most of this post and focus only on the Cowboys, Giants and Eagles.

Because the much more interesting aspect is how the Cowboys, Giants and Eagles compare, since all three teams finished with an almost identical record, the Cowboys and Eagles going 8-8, while the Giants went 9-7. Just as a reminder, these rankings are based on the 2011 regular season performance, and do not include the Giants' postseason run.

The Cowboys have often been criticized for having a "stars and scrubs" approach to building their roster, with a few standout players complemented by a bunch of no-names. But going by this chart of the 2011 roster, that is not the case. The Cowboys actually have fewer players ranked in the top 20% at their position than either the Giants or Eagles. But as if to make up for that, the Cowboys have more players ranked within the top 40% of at their position groups than the other two teams.

As a Cowboys fan, I am of course naturally inclined to say that whatever the Cowboys are doing is the best, and certainly better than whatever it is the Giants or Eagles are doing. But that may be a little shortsighted in this case.

In 2011, the Eagles had twice as many players ranked within the top 20% at their position (the blue-chippers) than the Cowboys. That's got to be a good situation to be in, especially if you believe the blue-chippers are the players that win ball-games for you. Of note, the Eagles have four defensive- and two offensive linemen who ranked as blue chippers, with OG Evan Mathis, OT Jason Peters and DE Trent Cole ranked # 1 across the entire NFL at their positions. That's a good place to be in.

An even better place for the Eagles to have been in is if the large number of blue-chippers would have translated into more quality across the entire roster, but it didn't. They have about the same number of Underperformers and Red Flags on their roster as the Cowboys and Giants.

The Giants have almost as many blue-chippers as the Eagles, but the roster thins out pretty quickly after that as well. The biggest concern here (although it didn't prevent them from winning the Super Bowl) is the state of their offensive line: three offensive linemen are categorized as Red Flags, one as an Underperformer. Only OT William Beatty qualified as a starter-quality lineman in these rankings.

Overall though, regardless of how the 2011 rosters were constructed, the value across the three teams is pretty similar, which is again also reflected in their similar regular season records. The table below adds up all the positional ranking points into one sum for each team, but also has a weighted sum for each team. The weighted sum weights the positional ranking points by the number of snaps a player played, so that players with lower snap counts don't count as much towards the total team value as players with high snap counts.

The results here suggest that from a positional ranking point of view, there was very little difference between the Cowboys, Giants and Eagles rosters in 2011. The Redskins of course are an entirely different story.

I'll grant that the total team values are a little bit of a disappointment, in that there are no significant differences to dwell on, but this will change as we look at the different position groups.

For the position groups, I tried to put together groups of at least five players where possible. I did not look at position groups for running backs or quarterbacks, as there simply weren't enough players to give us a good average at the position. You can look these up individually in the table above.

With that out of the way, I've put together five position groups for all four teams: The Receiving Corps group contains three WRs and two TEs, the Secondary has five defensive backs and the O-line has five offensive linemen. Owing to the different defensive schemes, these numbers change a little for the linebackers and defensive line: The Cowboys and Redskins have five linebackers in their group, the Eagles and Giants only three each; for the defensive line the Eagles and Giants have six players each, the Cowboys and Redskins only four.

To account for these differences, the table below doesn't show the total value of a position group, instead it shows the average positional rank for a player in that teams' position group:

As is to be expected, the majority of position groups here are marked in yellow, which means they are about average, with a positional value between 40 and 59 percent.

Don't think too much about the fact that the Cowboys are the only team that doesn't have a position group not marked in orange to indicate an Underperforming unit, the Cowboys' secondary should count as such, it's just that the numbers aligned in such a way that the secondary is one point shy of falling into the underperforming category. But while the Cowboys' flaw may be slightly obscured in this view, the other teams' flaws aren't.

The Giants' O-line grades out extremely low. Again, it didn't stop them from winning the Super Bowl, but the Giants will look for some serious upgrades here.

The Eagles have the only blue-chip unit in the East with their tremendous D-line, but it comes at the price of having a truly crappy linebacking unit behind it. Adding DeMeco Ryans should help the Eagles here, and I wouldn't be surprised to see the Eagles looking for more upgrades at linebacker. Also, don't be surprised if the Eagles upgrade at receiver as well. Eagles fans may have you believe that their Receiving Corps is the shizzness, in this ranking it grades out as the weakest unit in the East.

In terms of strengths, the Cowboys look good on the defensive line and despite a Martellus Bennett counting against the average, still come out on top in the NFC East with their Receiving Corps.

In yesterday's post Cowboys Free Agency: The Impact On The 2012 Position Groups we looked at how free agency could impact the Cowboys' 2012 roster as viewed by positional value. Here's what that could look like, using the table and the logic from above:

There are of course a lot of assumptions going into such a projection, but based on last year's positional rankings of the acquired free agents, the Cowboys significantly improved their secondary and their linebacking unit, and could do the same with a few judicious internal moves along the defensive line.

On offense, Bennett's receiving production will likely be more than met internally, but not Laurent Robinson's, and the O-line has not made any strides, at least on paper. For now, we're left to wait and see what the new season holds, but we'll be revisiting these rankings during the season to see whether the free agent hype actually holds up.

Look no further than Nnamdi Asomugha's first year in Philly to see that not every free agent acquisition will turn out as dreamed up.